If you eat a lot of quality seafood, then you can go ahead and skip to the next recommendation. You don’t need to supplement with fish oil.

By “quality” though, I’m referring to organic, wild caught fish; and preferribly species that tend to have a favourable selenium to mercury ratio.

The reason why the mercury/selenium ratio is important is because mercury, as most people now know, is a potent neurotoxin.

Selenium, luckily, has the ability to counteract the harmful effects of mercury exposure.

You’ll notice that the larger fish tend to be the ones you want to stay away from. Salmon isn’t on the list, but it has high selenium content.

The best choice of salmon is wild Alaskan/Canadian, as it’s both sustainable and has been shown to have minimal contaminants.

Speaking of contaminants; there’s a big difference between farmed salmon and wild salmon in terms of quality.

Wild salmon is one of the healthiest foods you can possibly eat. Farmed salmon on the other hand has been shown to contain high amounts of cancer linked PCB’s as indicated by independent laboratory tests commissioned by Environmental Working Group.

Contrasting all the differences between farmed and wild caught fish is beyond the scope of this article, but if you’re interested in learning more, here’s some
information on it.

So, if fish isn’t a mainstay in your diet, supplementation becomes essential to get the amount of omega 3 fatty acids required for optimal health.

The list of benefits experienced by fish oil supplementation is a long one, but to stay within the scope of the article, let’s look at..

How Fish Oil Can Enhance Your Performance As A Fighter?

Fish oil has been shown to aid in recovery and reduce the amount of post-exercise soreness following workouts that incorporate a lot of eccentric contractions.

An eccentric contraction is the technical term used to describe a scenario where the muscle lengthens against resistance. This type of contraction is typically associated with increased post-workout muscle soreness.

Fish oil supplementation has also been shown to enhance muscle growth by increasing protein synthesis by as much as 30%.

The same study also demonstrated that fish oil stimulates a pathway (called Mtor) that plays a role in muscle growth as well.

If you’re overweight, there’s a good chance that you’re insulin resistant. Insulin is a hormone that works to stabilize blood sugar and store nutrients.

When you’re sensitive to insulin, less of it is needed in order to drive nutrients into the cells. In other words, the cells are receptive to the insulin signalling.

When your cells are resistant to the effects insulin, you need more if it to get the job done. The beta cells of the pancreas, which secrete insulin, can eventually become overworked, causing them to die off, which leads to diabetes.

This isn’t a good situation to be in, obviously, but omega 3 fatty acids are one of the interventions that can reduce the risk of this occurring (reducing your intake of refined sugars and eliminating your consumption of trans fats and inflammatory vegetable oils is a must as well).

Increased insulin sensitivity can improve what’s known as “nutrient partitioning”, which means that insulin will be more effective at driving nutrients into the muscle cells (where you want them) as opposed to your fat cells.

In other words, by supplementing with fish oil and improving your sensitivity to insulin, you’ll be able to effectively shuttle nutrients into the muscle cells where the protein can aid with muscle recovery and the glucose can be stored as glycogen to fuel upcoming training sessions.

Our modern diet tends to be pro-inflammatory, and one of the contributing factors is an imbalance of omega 3 and omega 6 fatty acids.

We eat way too many “vegetable” oils, which are high in omega 6, and not nearly enough fish and other foods that have a high omega 3 content.

One of the best things you can do for your health is to stop eating vegetable oils, and especially don’t cook with them, but that’s a topic for a different article.

Inflammation is part of the body’s natural immune response. When inflammation is acute (temporary), it’s not a bad thing because it plays a role in the healing process.

However, when inflammation in the body sticks around long term, known as chronic systemic inflammation, it becomes a real issue and has been linked to a host of modern diseases.

If you’re able to reduce inflammation, ideally through a combination of diet AND supplementation with things like fish oil, you’ll likely experience a reduction in
joint pain, which is obviously a huge benefit to fighters who put their bodies through rigorous training sessions.

Chronic inflammation also triggers an unfavourable hormonal response (elevated cortisol for example), so getting that under control will have a lot of benefits, including improved sleep quality and a reduced risk for experiencing adrenal fatigue (which should be of particular importance for anyone who trains a lot).

Since fighting can be extremely stressful, this is a big one! As discussed above, fish oil can reduce both inflammation the elevated cortisol levels that accompany it.

Fish oil has also shown to be effective in relieving anxiety, which is not only beneficial to your heart and adrenal glands, but also for relaxation and recovery.

DHA rich fish oil has also been shown to decrease reaction time in athletes (29). Is that helpful for fighters? I’d say so, especially considering that a matter of
milliseconds can be the difference between slipping a punch or getting knocked out.

Fish oil supplementation has also been shown to enhance mental focus (30), or to be more specific (as described by the researchers in this study)..

“Omega-3 supplementation is associated with an improvement of attentional and physiological functions, particularly those involving complex cortical processing.”

The benefits of increased cognitive function carry over to nearly ever aspect of your life, but an obvious advantage relating to fighting would be the recall
and implementation of techniques.

How many technical variations are there in BJJ?

Another huge benefit of fish oil supplementation in relation to athletic performance relates to the positive effects it has on cardiovascular and pulmonary function.

Back in 2010, a study was done examining 40 wrestlers over a 12 week span to determine how omega 3 supplementation effected lung function during exercise.

Here’s what the researchers concluded..

“The results of the present study suggest that consuming omega-3 during intensive wrestling training can improve pulmonary function of athletes during and in post-exercise(26).

What this all means is that the improvements in overall cardiac output and lung function will increase the amount of oxygen you’re able to deliver to your working muscles.

When it comes to taking fish oil, you can do more harm than good if you use a low quality product. Reason being is because being a polyunsaturated fat, fish oil is susceptible to oxidation, which creates free radicals.

Free radical accumulation within the body causes cellular damage and left unchecked, can cause pre-mature aging. Rancid (oxidized) fish oil will also have an inflammatory effect on the body, which can lead to a spinoff of diseases.

Not good, considering a major reason for taking fish oil in the first place is to reduce inflammation and prevent the diseases attributed to it.

You’ve likely heard of anti-oxidants and how beneficial they are.

Well, as the name indicates, the reason why they’re beneficial is because they prevent oxidation. So knowing that, you want to look for a fish oil that includes antioxidants in it.

Other factors to consider are the potency, purity, sustainability and bio-availability of the oil.

Regarding the purity, you want to select a fish oil with the lowest amount of contaminants as possible.

A legit manufacturer will use a processed called molecular distillation to remove things like dioxins, PCB’s, mercury, lead, arsenic etc. Typically, fish that are low on the food chain, such as sardines and anchovies, will have a lower level of
contaminants.

If you want to make sure that the manufacturer is meeting their label claims, you can request that the company provide you with a certificate of analysis
(COA) by an independent agency. You also want to pick an oil that has a high amount of DHA (ideally 200-300mg per capsule). 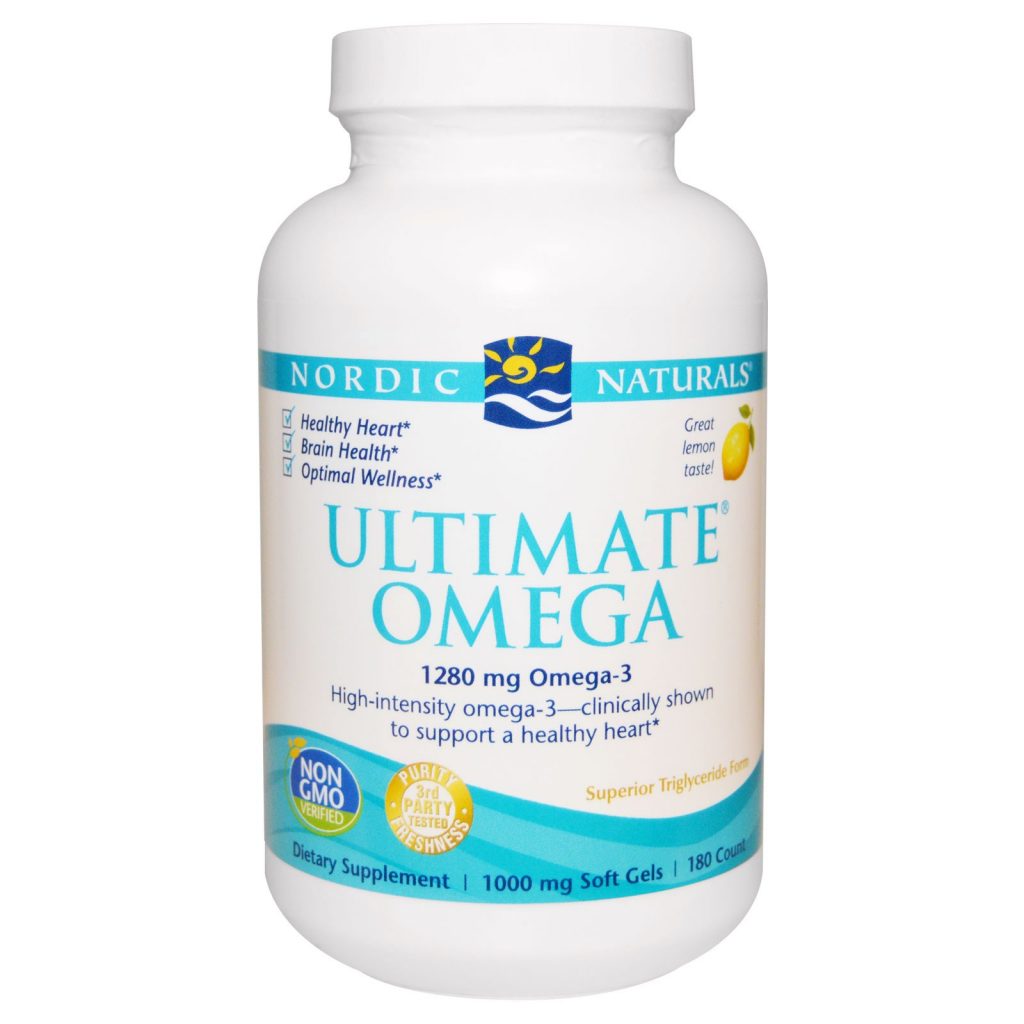