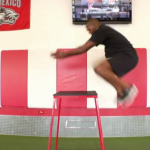 Jon Jones is coming on an incredible year where he not only won the light heavyweight championship, but also defended it twice, both times winning “fight of the night” honors in victories against former champions. He just won the “fighter of the year” award at the World MMA awards last weekend as well.

Clearly, what he’s doing to prepare for his fights is working for him. In the videos below, Yahoo sports gives us an inside look into the training, nutrition and mental preparation strategies that Jones believes gives him the upper hand against his opponents.