Beta Alanine is a noteworthy supplement for fighters because it has been shown to enhance endurance during high intensity bouts ranging from about 1-4 minutes.

I mention in the upcoming creatine overview that ATP is the bodies primary “energy currency”. The way our bodies generate ATP varies depends on the intensity of our activity.

When we’re training or competing at a high intensity, the initial burst will be fuelled by creatine and beyond that (assuming a moderate to high intensity is maintained), the body will shift into what’s known as “glycolysis”, which is a fancy word that describes the metabolic pathway in which glycogen (stored carbohydrate) and glucose (circulating sugar in your bloodstream) gets converted into usable energy (ATP).

When this conversion of carbohydrate to ATP occurs in the presence of adequate oxygen (termed “slow glycolysis”), long training durations are manageable (think of a marathon runner).

However, when you’re maintaining a high intensity for an extended period and unable to meet the oxygen demand (termed “fast glycolysis”), lactic acid accumulates and this build up can inhibit muscle contraction; making high intensity exercise unsustainable for long durations.

Beta-Alanine is the building block of a molecule called carnosine, which helps to buffer the lactic acid accumulation in muscles. This allows high intensity exercise to be maintained for a longer periods.

How much longer? Well, a meta analysis of all the double blind studies conducted on the effects beta-alanine supplementation showed an average improvement in muscle endurance of 2.85% (8).

That may not seem like much, but if you’re looking to compete at a high level, a near 3% increase in muscle endurance is a major advantage.

Even if you’re not competing at a high level (or competing at all), another benefit to supplementing with beta-alanine relates to the potential anti-oxidant and health protective effects of carnosine.

Carnosine (increased via beta-alanine supplementation) has been linked to longevity and has been shown to increase the lifespan in rats. Obviously, humans and rats are different and the effects may not be the same in human studies, but it’s interesting to note nonetheless. 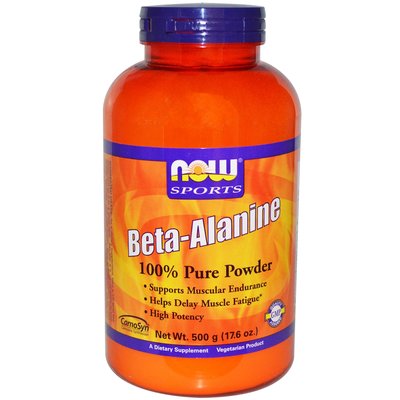 ==>> Recommended Beta Alanine Supplement
Use Code DZP677 for $5 Off