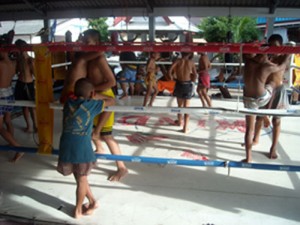 I vagely remember my childhood but I’m pretty sure that when I was 7 years old, I was into “WWF” wrestling and the ninja turtle movies. The closest I came to fighting at that age was when I’d act out the wrestling moves on a pillow while watching summerslam. Of course, at the time, I thought I was a badass.

The scene at the Sityodtong Muay Thai camp is unique to say the least. Upon first walking in, you really don’t know what to make of it. The average age of the people training there is about .. 14. There’s a lot that are younger, and of course, there’s a few older guys like myself. At first, you’re not so sure if the fact that there’s so many kids around is a good thing or a bad thing.

Well, it’s a good thing. The thing about Sityodtong is that they create champions. They start training the kids when they’re around 6 years old and by the time they’re 8, their technique is crisp and they’re able to kick the pads harder than beginners that are twice their age. I can only imagine what would happen if all the 8 year olds from the countries around the world went to war (hand to hand combat only).

Check out these little guys .. and girls, hitting the pads!

So why would this kids want to start training at such a young age? Well, I think it comes back to the fact that in Thailand, the younger generation is expected to provide for the family when the parents stop working. A lot of the girls look to prostitution (most don’t) while a lot of the boys test their skills with Muay Thai as it’s seen as a way “out” of poverty.

There’s a story that needs to be told here.

In most of the gyms, the kids are allowed to train for “free” but if they don’t become good quick, they get kicked out of the camp. The camps want the best fighters because in exchange for the free living & training, the kids are expected to fight and donate a portion of their winnings to the camp. Most Thai fighters rack up between 200-300 fights in their careers.

This is where the Sityodtong camp differs. The other day I had the opportunity to sit down with one of the trainers (a former lumpinee champion) and “the boss” and living legend himself – Kru Yodtong (born Erawan Sriwaralak). Kru Yodtong has been recognized by the Kingdom of Thailand as “superior teacher of Muay Thai” and throughout his teaching career, he has trained multiple Thai boxing champions (many of who are current trainers at the camp).

When I was made aware of Kru Yodtong’s contribution to not only Muay Thai, but his people in general, I had to write this story. Unlike at other camps, the fighters at Sityodtong aren’t expected to donate their winnings to the camp. It’s to my understanding that they’re givin half their fight purse up front and the other half goes towards their food, clothing etc.

The kids do not get kicked out of the camp for poor performance. Most of the kids training there are orphins or troubled kids that Kru Yodtong has unselfishly taken in and basically adopted into his family. What’s most important to Kru Yodtong is that these kids succeed in life and become good, productive members of society. 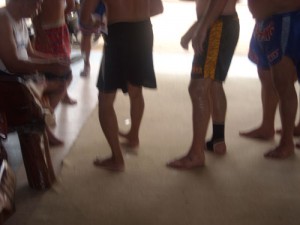 I guess it’s true when people say that “good things happen to good people” because Kru Yodtong has hit the lottery.. twice. The first time was a jackpot of approx. 56 million baht (just under 2 million US dollars) and the second time was good for another 2 million baht (around 60,000 US dollars). The money was not spent on himself.

Rather, the money was put towards bringing in more orphined and troubled youth. They were given a shelter, food and most importantly, they were given guidance through both Kru Yodtong, the family atmosphere at the camp and of course, the sport of Muay Thai.

It’s quite apparent that to Kru Yodtong, money is secondary. He just loves his sport and wants to teach and guide as many people as he can. Even when foreigners come to train, the fee is a modest 250 baht per session. Out of that 250 baht, 150 baht goes to the trainer and only 100 baht goes to the camp itself to help pay the electric bill. For those that don’t know, 100 baht is approx. 3 US dollars.

So what would YOU do with 2,000,000 US dollars? Would you give it all away to underprivilaged children? If not, that’s alright. Most people wouldn’t. I’m just glad I caught wind of this so I could get his story out to as many Muay Thai enthuasists as I could.

Up Next .. I’ll hopefully get a video of my padwork and perhaps a trip to Fairtex?

And of course, with tonight being my big night to go out, I’ll prob. get some footage of the crazy nightlife..