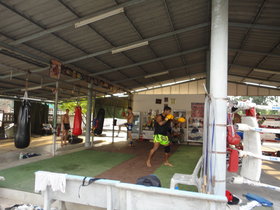 I’m writing this from Phnom Penh, Cambodia right now. This place seems pretty cool so far but I’ll go into detail in my next entry. I spent the last month in Pattaya since the air quality in Chiang Mai isn’t as clean as it usually is.

If you’ve read my past few posts, it’s pretty clear that I love Chiang Mai (and I still do) but apparently every year during the month of March, the air becomes polluted as a result of farmers burning off the undergrowth from the forest.

On a regular day, I can see the mountains while walking back to my apartment from Team Quest but the week leading up to when I left, I couldn’t see the mountains at all. I was also coughing a lot and my eyes were irritated. I have pretty bad asthma though so I’m particularly sensitive to the air quality. It didn’t seem to effect the other guys at the gym as much as it effected me.

Anyway, looking back on it, heading down to Pattaya was definitely a good choice. I was originally going to go to Phuket but I’m pretty determined to save cash right now to eventually invest in real estate so I figured Pattaya would be a less expensive option.

Not going to Phuket basically meant that I’d not only save money on the flights, but also, I’d save on pretty much everything else as well since accommodation, food and transportation are generally less expensive in Pattaya.

As long as you’re not spending time in the bars and getting hustled by the girls, Pattaya can be a pretty cheap place (though still more expensive than Chiang Mai).

Staying in Pattaya wasn’t anything new to me though as I had spent 3 months there a couple years ago. This gave me a chance to re-visit some of the gyms I had trained at last time and also, check out some new ones (and ones I didn’t know about last time). For starters..

Of all the gyms I trained at over the past month, I liked this one the best. I just went there a few times but I liked the fact that it was quite authentic as the main focus is on developing fighters from youth (plenty of children and young teenagers training here).

Not many people know about this gym either and because of that, there aren’t many foreigners. It’s quite far from the city center but it’s easily accessible since Sukhumvit 53 (the soi that’s its on) is right across the street from where a baht bus will drop you off at the end of Pattaya Klang road. From there though, you’d need to take a motorbike since the gym is about 2km down (located on this street).

There are just 2 trainers here but I was always able to get a full 5 rounds on pads. Seems like the kids sort of take a backseat to the foreigners who are paying to train. If it got much busier though I could see it being a problem but then again, I’m sure they’d just get more trainers.

Sudsakorn represents this gym as he’s the owners brothers nephew. The owner by the way, Tappaya Sit Or, is a former WMC and Raja stadium champion. He’s usually the one who trains the Thai kids there (from what I’ve seen anyway).

Anyway, here’s a video I was able to get of Sudsakorn doing some pad work as well as some random shots of the kids clinching..

I hadn’t been too Sitpholek at all during my previous stay but I had heard about it. It’s been around for 15+ years and some great fighters have been produced there; most notably, former WMC champion Wanlop Sitpholek.

Anyway, this gym is located on Sukhumvit 34 (on the main road though). It’s a standard weight lifting gym in the front with a Muay Thai area in the back. The cost is 270 baht per session so I would usually go here on the days when I wanted to lift as well.

The training there was alright. It wasn’t too busy and the trainers give you a good amount of time on the pads. One of the trainers was especially helpful. He came up to me a couple times and would demonstrate techniques on the bag.

When I tried to converse with him, the receptionist informed me that he was deaf and couldn’t understand what I was saying. Still easy enough to communicate though. He was also the guy that would come up and give people quick massages between rounds; which is always nice.

The gym I probably trained at the most though was Golden Glory as it was the closest gym to where I was staying. Golden Glory (like most of the gyms in Pattaya) is sort of a drop in gym where you show up, smash pads and leave.

It’s good for what it is though. They 3 Thai trainers currently working there; 1 of which is really technical. His name is “Kay” (I think) and he’s one of those trainers that literally gets upset if you do something wrong as I witnessed when he lost his temper a bit while training a guy who couldn’t seem to kick properly. That’s a good thing though; you want that in a trainer. It shows he cares.

The other two trainers; one just works you on pads at a high intensity, but with repetitive combos. Basically the same sequence over and over again (not so great). The 3rd trainer I didn’t work with but he didn’t seem overly technical while I was watching him. Good for a cardio workout though I guess.

A newer gym that I checked out (though only for 1 session) is Cho Nateetong. Tak, the owner, was brought up in the Sityodtong gym and he seemed like a really nice guy. Training starts late here as most people didn’t start on pads until after 5pm.

The gym is a bit out of the way (just off Sukhumvit road just as you enter Pattaya) but it’s accessible via the baht buses that drive up and down the main street. I wish I had spent a bit more time here so I could get a better idea of what the training is like.

Having only trained there once, I can say that based on my limited experience, the training seemed alright. Everyone who was training there (pretty much all foreigners when I went) seemed like they were on a high level. There are 2 rings but there’s a shortage of bags to use.

Actually, the facility itself is lacking a bit but that doesn’t really matter too much as long as the training is good. A lot of the students did a run before and while I had to dip out of training a bit early, I got the impression that the sessions were complete (running, pads, sparring, clinching) .. Just not a lot of bag work because they barely have any there.

The gym I finished off training at is Sityodtong. I had trained there before a few years ago and my initial impressions of it here and here.

I had a different feel to it this time though as I didn’t see nearly as many kids training and I think most of the trainers/fighters are based out of the Evolve Gym in Singapore now.

Anyway, I guess I’ve improved a lot since I first trained there years ago because after my first session, one of the trainers asked me to take a fight (which is nothing out of the ordinary) but the opponent he was trying to set me up with was a bit unexpected.

This guy wanted me to fight Yodsanklai Fairtex on April 21st in China. Now, if my career aspirations to become a professional Muay Thai fighter, that would be a huge opportunity to make a name for myself.

It sounded tempting initially, but the more I thought about it and weighed out the pros and cons, the more I realized that my days of doing stupid shit to look cool ended back in high school.

And to me, the concept of fighting one of the best fighters in the world for pocket change when I have a respiratory disease and no health insurance falls under the “stupid” category.

The fact that I was offered a fight with such a big name is a testament to the connections they have at Sityodtong; which is important to look for in a gym if you’re looking to fight as a career.

However, the fact that the trainer told me he wanted half of my fight purse, then acted like an immature 6 year old when I told him I wasn’t into it has sort of soured me on training there anytime in the near future.

As impressed as he was with my “pad hitting”, there’s no way he actually believed that Yodsanklai was an evenly matched fight for me so it goes to show that the trainers here (well, one in particular) will try to throw you to the wolves to make a buck off you.

Anyway, as I mentioned above, I’m in Cambodia at the moment. With the visa I have, I have to leave and re-enter Thailand every 3 months. Usually I just cross the border and re-enter within a few minutes but this time I figured I’d actually spend some time here (5 days) and gain a new experience.

It’s definitely been interesting so I’ll have another updated posted within a few days. From here, I’ll be heading back up to Team Quest in Chiang Mai since Songkran is coming up and apparently Chiang Mai is the place to be for it.