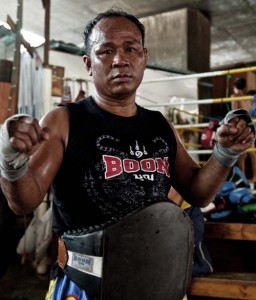 I visited the 96 Penang gym about a month ago and I should have written this sooner when the experience was fresh in my mind but I’ve just been busy (and a bit lazy) so I kept putting it off.

To date, I’ve only trained here once so this isn’t going to be an in depth review but I wanted to spotlight the gym a bit and give it a recommendation.

One of the most notable traits of the gym is the unique location; situated in the slums of Klong Toey. Don’t let the location of the gym put you off though because you can easily access the gym without having to worry about getting jacked by a Yaba addict.

To get to the gym, all you need to do is take the MRT (subway) to “Klong Toey” station and the gym is just a short (30 baht) motorbike ride from there.

The facility itself has a pretty creative set up. There’s unique rubberized flooring that I haven’t seen anywhere else (not sure what they got the material from) and the ring and bags are sheltered from the rain by the Rama 4 bridge.

Here’s a short video that I took of the place..

The trainer first shown at the 0:10 mark of the video in the blue shirt is named Kaisuwit. Kaisuwit is a former Rajadamnern stadium champion and a past winner of the “fighter of the year” award.

Equally as impressive though is the “trainer of the year” award that he’s won for molding underprivileged youth into champions themselves.

To add to my amazement, he even gave me his business card which stated those accomplishments. How many trainers in Thailand have hit you up with a business card? Apparently they’re pretty business savvy under the Rama 4 bridge haha

There are a few top level fighters that have been produced at the gym; the most notable of which is Samranchai. Samranchai has captured both a Lumpinee and a Thailand national title earlier in his career still fights actively.

Sakmonkol, who is Samranchai’s cousin, also fights out of the gym and is currently ranked within the top 10 at Rajadamnern stadium.

Also on the 96 Penang roster is a young fighter named Bangpleenoi who’s ranked right near the top of the 108lb weight class at Rajadamnern stadium as well.

As for my personal experience at the gym, I have to say that one of the most technical trainers I’ve ever worked with is here. Check out that video again and you’ll see a trainer wearing a black “Boon” sleeveless shirt appearing at the 0:17 mark. That trainer is phenomenal!

Unfortunately, I don’t know how name or his story but based on his training, I know it has to be epic. I did a bit a research and his name could possibly be “Sricoon”.

If it is him, then he’s a former Rajadamnern champion himself, has 200 fights throughout his career with a 90% win rate and has trained multiple champions at both 96 Penang and Sit Or gym. “Sricoon” has also trained boxing legend KhaoSai Galaxy, who’s 85% knockout percentage earned him a nickname of “the Thai Tyson”.

It wouldn’t surprise me at all if the trainer I worked with was indeed “Sricoon” because he was really critiquing my punches and showing me how to get more power/weight behind them.

I’ve been training at two other gyms that I’m VERY happy with lately but I definitely plan on going back to 96 Penang because the training was great. If you’re in Bangkok, I’d suggest that drop in for a session yourself.