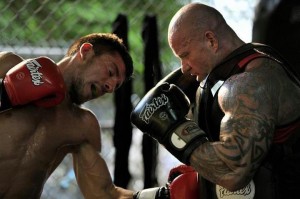 The best thing about living in Bangkok is that there’s so many great places to train. I’ve changed my opinion since the days when I was complaining about it. The key to enjoying the city (for me anyway) was just to find an apartment near the mass transport system (either the subway or the sky train). Now it’s easy for me to get around without having to deal with the traffic here.

For the past couple months, I’ve been splitting my training sessions between a few different gyms. Two of the gyms are awesome discoveries and I’m not even sure if I’ll write about them because there aren’t many (if any) other foreigners training there. I guess I’m being selfish but really, the less foreigners at these gyms, the more attention I get haha

I did however do a session at a different Thai gym yesterday afternoon that I’ll be writing about in my next entry. This particular gym is literally located in the slums of Bangkok so they could really benefit from the money foreigners would provide in exchange for training there.

The purpose of this entry though is to spotlight a gym called Fighting Spirit. Fighting Spirit has been around for a few years now, it caters mainly to foreigners and the owner, Dan Lyons, has done a good job building up the gym and ensuring that they offer a good value (quality training + good location + affordable price).

The gym is located in an area where you wouldn’t expect to find a Muay Thai gym due to the presumed value of the land. It’s right in the Silom area, which is easily accessible either the subway or sky train (about a 15 minute walk from either the Sala Daeng or Silom stations).

I had a hard time finding it the first day but all you need to do is walk straight as you exit the Silom subway station. Eventually you’ll see a big hotel that says “Pullman” across the street (pictured here). Keep walking straight (on the opposite side of the road as the hotel) and you’ll eventually see this sign on the left (sign pictured here). Turn in and the gym is located about 50 meters or so from there (just past the cemetery on the left side).

Being located near Bangkok’s mass transportation systems means that the gym is easily accessible from a lot of areas within the city. It also means that if you’re staying in the area (either at the gym or nearby), you’ll be able to get around quite easily and you’ll have a lot of dining and entertainment options nearby since it’s a bustling nightlife area (Patpong).

This gym reminds me a lot of the old Patong Boxing Gym that I liked so much in the sense that you can turn up anytime during the designated training hours and expect 5 rounds of quality padwork. By quality, I’m referring to the fact that the trainers here are all good pad holders. Even the Australian gym owner (Dan Lyons) is a good trainer/pad holder (just hope he doesn’t fire too many kicks back at you because he’s massive).

If I was to be very critical here (which I’m supposed to be), I could point out a couple things. The first is that since it’s located right in the city, the workouts start off with skipping (if you choose to skip) instead of a run (there might be a park nearby but I haven’t seen one).

Secondly, this isn’t a gym where anyone is going to hold your hand and make you do a bunch of push ups and sit ups. This is a gym where you can drop in, do a quick warm up and blast out 5 x 4 minute rounds of quality pad work. If you want to do more beyond that (sparring for example), just let the owner know and he’ll match you up with someone or just ask one of the other guys training there if they want to spar a few rounds with you.

There’s a good range of skill levels here so you should be able to find someone who you match up well with. I haven’t seen any clinching here but they might do that in the mornings (not too sure since the earliest I wake up as 12pm).

They recently set up a small grappling area as well so you can get some privates by Stanley Phan (MMA fighter and BJJ purple belt from California) if you want to work on your grappling a bit while you’re here.

They have a few rooms available on-site for reasonable rates considering the location (price list here) but since the gym is accessible by both the BTS (sky train) and the MRT (subway), it’s pretty easy to stay outside the gym (in different areas of the city even) and just commute there for training. My condo is almost 10 subway stations away in a completely different area of the city but the commute to get there isn’t much of an issue.

They definitely have everything you’d need here. There’s a good amount of open mat space, new Fairtex bags, 1 shower, changing area and a separate washroom. There’s 1 ring (most people do pad work outside the ring anyway) and what usually brings me there about 2x per week is the free weight area.

They recently installed a grappling mat and a pro shop that sells training gear and nutritional supplements. The prices in the pro shop seem pretty reasonable too (not much more expensive than what you’d pay in the official Fairtex shop in Bangplee).

Other than what I’ve already mentioned (lack of clinching etc), I’d have a hard time finding any other faults with the gym. Sure, the training structure isn’t strict, but whether you view that as a positive or a negative depends entirely on what you’re looking for.

The facility is kept clean, you get a full 5 rounds on the pads, the trainers are all consistently good pad holders, the gym is easily accessible for both the sky train and the subway, the prices for training are very reasonable as are the prices in the pro shop. I’d definitely recommend checking out the gym if you’re in Bangkok and you’re looking to drop into a gym and smash some pads. Here are a couple videos that show off the gym a little bit..