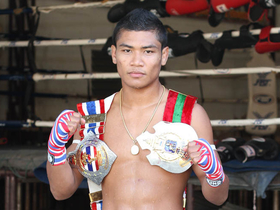 My training routine is pretty much set here in Bangkok and as I mentioned, I’m splitting my time between two gyms. I haven’t wrote about either of the two gyms on here yet simply because I don’t want them to fill up with foreigners. It’s selfish really, but the more foreigners in the gyms, the less attention I’ll get from the trainers.

Of the 2 gyms that I’m at, one of them doesn’t even have the room for a lot of foreigners. They have a major sponsor and they earn a percentage of the winnings from the fighters that train there. So, it’s not like they need an influx of foreigners anyway. Truth is, I feel lucky that they even let me train there.

The second gym I train at has plenty of room, and the owner seems keen on bringing more foreigners in, so I’ll be writing about it in a future entry. This particular gym is stacked with champions and when I go there, I get to spar and clinch with the current lumpinee champion and the no 1 ranked fighter at Rajadamnern (each in the heaviest weight class).

So, those are my two main gyms, but I checked out a couple of new gyms last week. One of my friends here recently fought at Lumpinee stadium and he had a week in Bangkok before he moved down to Phuket. Wanting to switch it up, he suggested that we visit a few new gyms, which I’m always up for as it gives me some new content for this website.

The first gym we went too is called Lookbanyai. It has been around for over 30 years and multiple champions have been produced there. I first heard about it when I was training at Watcharachai Gym (which is now closed) as the trainer I was working with (Yodbuangarm) was brought up in the Lookbanyai camp. Yodbuangarm is a lumpinee champion and a Thailand national champion and at the time of this writing, he’s the latest Muay Thai trainer that Evolve MMA has recruited for their gyms in Singapore.

Other notable fighters that have been produced here are Saenghiran Lookbanyai, a Western boxer who holds a record of 24-2-1, a win over Anuwat Kaewsamrit and a WBC belt in the 122lb weight class. Danchai, who become a Rajadamnern stadium champion in 1993 and Norasing Lookbanyai; a 2x lumpinee champion and winner of the prestigious “fighter of the year award”.

Norasing recently made a switch over to Western boxing and captured the vacant PABA 115lb title as he stopped PBF champion Michael Escobia. That being said, if you’re looking for a Muay Thai gym in Thailand that will emphasize your boxing, you might want to check out Lookbanyai.

Getting to the gym was really easy. To get here, you can get off at Sutthisan MRT station and walk towards the massive “Poseidon” soapy massage complex (don’t get distracted now) and hang a right as you walk towards it (107/1 Intramara 45 Sutthisan). Once you walk a bit, you’ll need to take a left down a small residential street (just ask someone in the area to point you in the direction of the “Kai Muay” and shadowbox..they’ll understand).

The first thing you’ll notice as you enter the gym (besides the dogs barking at your feet) is the terrible smell. It hits you hard when you first enter the gym but about half way through your warm up, you don’t notice it anymore. The training here was pretty good, but the downside was that most of the fighters were a lot smaller than us so I didn’t feel as though I would have gotten a lot out of clinching, and didn’t wait around for it. At the two gyms that I split my time between, I have a lot of big, top level Thai’s to clinch with so I’m sort of spoiled in that sense.

Instead of doing 5 short rounds of say 3 minutes each (like most gyms will give you), I got one 10 minute round. The trainers were all pretty good and funny enough, all of them were missing most of their teeth as well. The guy that trained me had a Phuket Top Team logo on his shorts and when I asked him about it, he said he used to work there. Here’s some footage I took during the session..

I really like to train at gyms that aren’t used to having foreigners. Of course, that means I have to experience the awkward moment of pulling up to the gym, stepping out of the taxi and having about 30 Thai fighters staring at me with a confused look on their face (which was the case when we rolled up to Rachanon gym).

Rachanon is located near the military base and the owner, Mr. Vichai Khadpo, is a major in the royal Thai air force. A boxer himself, he was also a bronze metalist in the 1996 Summer Olympics.

There were a lot of fighters here, seemingly more than the gym could really accommodate, but I was only there for 1 session it’s hard to tell. Rachanon won the “gym of the year” award in 2011 and only recently became welcoming to foreigners; which is the main reason why I wanted to check it out so much.

The star fighter of the gym is “F-16”; a holder of both a Lumpinee and a Thailand national title. He wasn’t training the day I went. The owner said that he hurt his knee and was recovering, which is unfortunate because I was hoping to clinch with him.

I did however get some clinching in with one of the other champions at the gym. Design Rachanon; current holder of the Thailand national belt at 115lbs, which he won from Hongthonglek Chor Farpleansee at the end of 2012.

It’s not surprising, considering that he’s one of the best in the world, but he has a really strong clinch for someone his size. I would describe it as being “sticky”.. he just latches onto you and it’s a challenge to get him off.

Like Lookbanyai, I got one long round on the pads, a round of sparring and then some clinching to finish off. It wasn’t a hard session at all, but at the end of it, when we went to pay, the owner didn’t even want to accept our money.

I guess he was letting us try it out to see if we liked it. I’m sure if you actually committed to staying and training there, you’d get pushed and encouraged throughout the entire session.