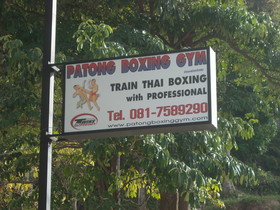 I came to this gym with the intention of staying for about a month but a month has now turned into two and it looks like I’m going to be staying for another. Of course, with this being my last month in Phuket, I’ll be training and reviewing at some of the camps I’ve missed – Sinbi, Rawai, J Prappa etc. So if you were considering training at one of the camps I’ve neglected, don’t worry – you’ll get your review.

The main reason why I don’t go live at one of the other camps – aside from the fact that I’m getting great training at the Patong gym – is the fact that the other camps are situated in isolated locations which gives the gym owners and nearby businesses a monopoly since they can jack up the rents as much as they want and still get foreigners that don’t know any better to pay.

For example, if you check out the Sinbi website, you’ll see that they’re renting out their private room for 22,000 baht a month. To put that into perspective, I’m currently paying 8000 baht per month where I’m staying now and I have air conditioning, satellite TV, wireless internet, king size bed, large washroom with hot water and to top it all off – I get my room cleaned for me on a daily basis.

At Sinbi – and most likely a lot of other camps – 8000 baht will get you a shared room without air conditioning and a bunk bed to sleep on. Now, if you’re only in Thailand for a short period of time – or if you have a loaded bank account and money isn’t really an issue for you – then overpaying for your room to stay on-site at a good gym might be worth it for you as long as the training is good.

But for me, seeing as how I’ve been here for about 9 months already, I have need to save money wherever I can. So staying right where I am in my nice, affordable room seems like the best thing to do at the moment. Not to mention the fact that the owner of the guesthouse I’m at is extremely nice and just the other night, she cooked me a huge dinner for free : )

So as for the training at Patong Boxing Gym, there a few things that make it a little different from a lot of other gyms. The sessions aren’t run at set times and in a group format. Rather, you can show up whenever you want between operating hours and from the moment you enter the gym until the moment you leave, you’ll be under the supervision of one of the trainers.

In other words, the whole thing is personal training – which is something that a lot of other camps in Phuket charge extra for. Also worth mentioning is the fact that the minimum amount of pad-time I get per session is 5 rounds – usually 3 rounds of Muay Thai and 2 rounds of boxing – although how you chose to split up your rounds is entirely up to you.

People don’t come to Thailand to kick the heavy bag for 8 rounds alongside a bunch of foreigners while waiting for a trainer to call you into the ring for a couple rounds of pad-work. If anything, the bulk of your time should be spent one on one with a trainer. If you want to kick the heavy bag on your own, you can save your money, stay home and just train in your basement.

As for sparring and clinching, you’ll get plenty of that too as long as you make it known that you’re interested in doing it. The training sessions are based around exactly what you want to do and you can break things down however you like.

Normally I get my 5 rounds of pad-work in but earlier this week I mentioned that I wanted to focus on sparring more so that’s exactly what I’ve been doing. A couple of the Thai trainers are fighting next week so I’ve been sparring with them to help get them ready. And speaking of the trainers, here’s some footage I took of a couple of them working their kicks on the pads..

The location of the camp is awesome as well. It used to be located in a congested area near the beach surrounded by a bunch of suit shops and “happy ending” massage parlours – which meant you got harassed and basically molested every time you walked to and from the gym.

Looking to expand, the owner bought some land and moved the camp up into the hills. It’s perfect actually. It’s a nice quiet area with clean air, a beautiful view, a cool breeze and a nice running path. It’s a distraction free environment but if you also have the convenience that accompanies living and training in Patong – which is the most developed beach in Phuket.

Here are some photos of the camp and the camp surroundings..

A single training session at Patong Boxing Gym will cost you 400 baht – which is more than what the camps in Pattaya charge but it’s right on par with the cost of the gyms here in Phuket. A month of training (twice a day) will run you 8000 baht and if you wanted to live on-site at the gym as well, a month of training AND accommodation costs 18,000 baht – which is approximately $17.50 USD per day.

The rooms aren’t what you’d expect from a Muay Thai camp either. They basically resemble standard hotel rooms. They have a fridge, wireless internet access, cable TV, private washroom with hot water, two beds and most importantly – air conditioning! Here a little tour of the room before the fridges were put in..

I’m sure it’s pretty clear that I recommend this gym. The facility is brand new and well equipped. The training is great (oftentimes more trainers than students) and you have the freedom to structure your workouts as you’d like. The prices are fair and the on-site accommodation is great.

And of course, the location gives you the best of both worlds. You’re in a nice quiet area for your training but you’re never inconvenienced since down the hill (just a short motorbike ride away), you have access to everything you could possibly need such as convenience stores, markets, shopping malls, restaurants, nightlife – basically anything and everything.

The entire staff is really nice as well. I train late in the day and I’m usually one of the last students to leave since after my session, I’ll usually stick around for a bit to kick the bag or lift weights. This is around the time when all the trainers sit down to eat and they always insist that I join them – even though I don’t pay for the food.

More often than not, one of the trainers gives me a lift down the hill and even if I try to pay him for the ride, he’ll just smile and say “no problem”, then drive off. Actually, now that I mention it, the trainer that usually drives me back to my room has had a lot of major fights.

He’s fought on TV from lumpinee stadium on several occasions I believe and he once won a million baht for his efforts. There’s a picture of him holding the big stack of 1000 baht bills up at the gym. I guess that’s why he doesn’t bother taking my money – he probably has more than I do anyway!

All in all, I can’t say enough positive things about the gym and my experience here. The only negative thing I have to say is that they’re not always on top of their emails so if you have any specific questions – and if you’re unable to get a quick response from them – just hit the contact button and send your questions to me. I’ve spent enough time here that I’ll more than likely be able to answer them for you.