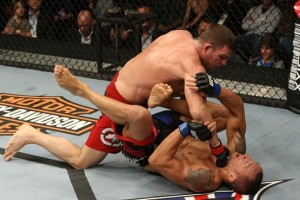 So this is a fight that has been in the making for a while now. In his fight versus Denis Kang, Joe Rogan mentioned that Michael Bisping originally wanted to fight Wanderlei Silva because he wanted to get a win against a top 10 opponent to bounce back against his devastating knockout loss at the hands of Dan Henderson.

Well, at the time, he was unable to get the fight with Silva but instead, he put on an incredible performance against the always game Denis Kang. Kang is a highly ranked Brazilian Jiu Jitsu practitioner (black belt) and Bisping had the opportunity to showcase his much improved ground game as he did a great job and maintaining his composure and re-gaining his guard when he was in some potentially threatening positions in the first round.

While Michael Bisping has gotten back to his winning ways, the same can’t be said for Wanderlei Silva, who has lost 5 of his last 6 fights. In all fairness though, that’s not a good indicator of his performances because in the 3 of those losses that occurred in the UFC, he won “fight of the night” honours for 2 of them – both of which were razor thin decision losses to Rich Franklin and Chuck Liddell respectively.

As for how this fight plays out, it’s fairly unpredictable. Wanderlei Silva is a legend and he’s got to where he’s at for a reason. You can never count him out, even despite his recent losses and Michael Bisping, he seems hungrier and more motivated than ever. After watching his performance at UFC 105 (which Joe Rogan referred too as the “best performance of his career”), it seems as though that the loss to Dan Henderson may have actually been a good thing for him. He needed to be humbled anyway.

Both of these guys leave it all in the Octagon every time they fight so I wouldn’t be surprised if this one ends up going to a decision and gets put into the hands of the judges. I also wouldn’t be surprised if this ends up taking “fight of the night” honours as well. However, anytime you’re on the same card with “Big Nog”, there’s going to be some serious competition for that bonus.