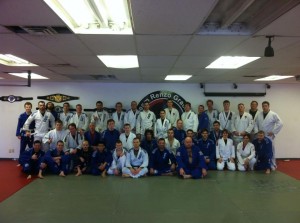 After my recent 15 month stint in Thailand, I just spent a month back in my hometown of Ottawa, Canada.

I try to go home for at least a month every year to visit my friends and family and during my past visits, I didn’t make the effort to get into a Muay Thai gym.

Now that I’ve gotten into Brazilian Jiu Jitsu, I decided to give Goodlife Fitness a miss and instead head into a gym called called OAMA (Ottawa Academy of Martial Arts).

The gym was recommended to me by a friend of mine named Cameron. Cam’s been training there for about a decade, and speaks highly of it, so I figured it was worth checking out.

There are a few locations throughout the city (Rockland, Kanata and Carling). I was training at the one on Carling, which was their original location.

Before going in, I had heard mixed feedback from people. There were guys like my buddy Cameron, telling me how great it was, while I had heard from others that it was very “clickish” in a sense.

The gym really emphasizes loyalty, and it has quite a few long term members that have obviously bonded, so perhaps that’s what people were talking about when describing it as being clickish.

Hearing that, you may assume that it’s unwelcoming but that couldn’t be further from the truth. I was surprised and impressed at how warm and open the students at the club were (especially to new comers). Everyone I encountered here was very helpful and respectful.

That seems to be a recurring theme at Brazilian Jiu Jitsu gyms that I go too; it’s definitely a very humbling art and the guys who come in with big ego’s rarely last.

Living in Bangkok, I’m pretty spoiled when it comes to Muay Thai training so while I was at OAMA, my main focus was on Brazilian Jiu Jitsu. Based on what I saw though, the Muay Thai instructor, Marek Wolos, was quite good. He was a former coach for the Polish national team and you can tell that his style is influenced by K1/Dutch kickboxing.

As for the Brazilian Jiu Jitsu program, I can’t speak highly enough about the level of instruction I received. I did classes with about 4 different instructors and each one of them explained the details of the techniques they were showing in a very detailed way.

Matt Hache is an instructor that stood out to me. A black belt under Renzo Gracie and an excellent teacher, I’d say that if you have the opportunity, go to as many of his classes as you can.

One of the things I noticed at OAMA is that the classes are quite short (45 minutes on average). It’s much different than what I’m used too here (average training session in Thailand is between 2-3 hours), but it makes sense why it’s structured the way it is.

Most people in Ottawa are working full time jobs and may not have much free time, so the schedule at OAMA is clearly tailored for convenience. It’s easy enough for the busy people to drop in for a 45 minute class; especially considering the fact that there are about 15 classes per day to choose from (between Muay Thai, BJJ and MMA).

For someone like me who has a bit more free time than the typical worker, I thought it was great because I had a lot of classes to choose from every night that I went and I could still get my 2-3 hours of training in if I wanted.

I understand the OAMA hype now and why certain people are so passionate about it (to the point where they get matching tattoos to show their loyalty).

If you’re reading this because you’re considering joining, I’d say you should just head in and see for yourself how welcoming they are and how good the training is (they offer a free trial session).

For me personally, I’d train at OAMA for sure if I was living in Ottawa and I plan on heading back there next time I’m in town visiting family.