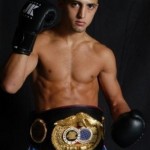 With only 1 loss in 72 fights, Giorgio Petrosyan – who’s already a 2 time K-1 Max tournament champion at just 25 years of age – is arguably the best active kickboxer in the world today. In his last fight, which was a couple weeks ago, he took on Chahid Oulad El Hadj. The fight didn’t go El Hadj’s way since dispite putting up a fairly solid performance, he took a hard kick in the nuts in the 3rd round and couldn’t continue.

Petrosyan is incredible to watch. It seems like he’s always a step or two ahead of his opponents at all times. Seems like he’s pretty hard to hit as well. I’m not too sure who he’ll be fighting next (since it hasn’t been announced) but most likely, he’ll end up with another W on his record because dispite fighting top quality competition throughout the majority of his career, it seems like hardly anyone can hang with Petrosyan at this point in his career. Anyway, here’s the video..