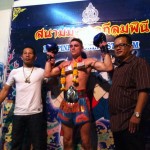 Last night (February 10th, 2012), history was made as Damien Alamos became one of the only foreigners to ever win a title at the notoriously competitive Lumpinee stadium. Damien is now the current 140lb champion as he outpointed Kongfah Uddonmuang in route to a decision victory.

I first saw Damien fight at the channel 7 stadium last year and at the time, I didn’t know much about his background. I just knew what I saw and his style of fighting was very impressive. As you can see in the videos below, he fights just like a Thai. At only 21 years of age, he has amassed a 44-7 record with 5 championship titles (including his latest from Lumpinee) to his credit. Looks as though he has a bright future and it’s a bit surprising that he’s flown under the radar for so long. His latest title fight isn’t posted online yet but here are a couple of his previous ones..