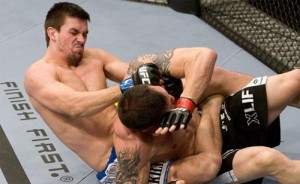 “The best grappler in MMA” vs. “the best striker in MMA” – that’s how the UFC is promoting the upcoming fight between Demien Maia vs. Anderson Silva. Sure, a case can be made for other grapplers (Renaldo “Jacare” Souza) and other strikers (Malaipet “The Diamond” Sasiprapa), but neither of them fights for the UFC and it’s unlikely that such a match up will ever happen so this is most likely the best grappler vs. striker showdown that we’ll get to see in the near future.

Coming into this fight, Anderson Silva is a pretty heavy favourite – which is to be expected. After all, he’s undefeated in the UFC and he hasn’t lost in over 4 years. Not only that, but he’s completely dominated his last 11 opponents. In his last fight, he moved up to the light heavyweight (205 lbs) division and picked apart the former champion, Forrest Griffin. It was such a dominant performance that the knockout earned him the Sherdog 2009 “beatdown of the year award”.

In his fight before that, he went the distance in what turned out to be a boring fight with Thales Leites. A Jiu Jitsu ace himself, Thales Leites disappointed the crowd with a complete lack of an offensive attack and with Anderson Silva being a defensive counter-striker, the fight left a lot to be desired. However, Thales Leites was supposed to give Anderson Silva problems on the ground as he’s the more accomplished grappler but he wasn’t able put Anderson Silva in a compromising position at any point during the fight.

Now onto Demien Maia. Demien Maia is slicker on the ground than Thales Leites and as demonstrated in his last fight against Dan Miller, he’s really improved his striking lately. That being said, I don’t see him threatening Anderson Silva on the feet and aside from jumping guard, I don’t think Demien Maia has the wrestling ability to close the distance (while avoiding the clinch) and getting the fight to the ground.

The odds-makers are right by making Anderson Silva a heavy betting favourite in this fight since he’s a complete fighter. He’s one of the top strikers in the sport and even if the fight were to hit the ground, he’s extremely competent in Brazilian Jiu Jitsu as he has earned a black belt under the Nogueira brothers. Re-watch his fights with both Travis Lutter and Dan Henderson. Both of those guys were supposed to out-grapple Anderson, yet both of them ended up getting submitted.

That being said, I think that if Demian Maia can somehow get the fight to the ground, Anderson Silva might actually be in some trouble. He’s a top level Jiu Jitsu competitor and he certainly has a legit chance of catching Anderson Silva with a quick submission. It’s whether or not he can bring him to the mat that’s the big question..