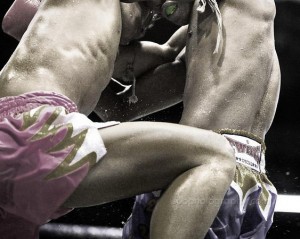 The air is warm and dry. Your feet are burning from the hot canvas underneath, not quite to the point of blistering. Sweat pours down your face like a tap, as if someone is slowly pouring water over your scalp. Your lungs take every individual breath like it’s the first one you’ve ever taken. Your senses are sharp. Your body is heavy with fatigue. Voices are shouting orders at you, and you absorb them without thinking. The bell rings. Anxiety builds. You take a deep breath and enter the 13th minute of your first Muay Thai fight.Nothing I have done is as exciting, challenging, and rewarding as Muay Thai.

The national sport of Thailand comes from thousands of years of history and culture. Muay Thai is not only about fighting, it is about honor and humility, persistence and dedication. You don’t just hone your fighting skills, you learn to understand your limits, both mentally and physically. Your body will try desperately to convince you to quit, so your mind has to be strong enough to ignore pain and fatigue.Muay Thai comes from an ancient form of fighting, used by the Thais to fight the Burmese during ancient wars, called Muay Boran.

When the wars ended, everybody still loved seeing people get their faces smashed, so large organized fighting events were staged everywhere. After loads of deaths and critical injuries, however, rules and equipment were altered so that fighters wouldn’t leave the arena crippled or dead. Fighters used to use hard-packed banana leaves or tree bark for groin protectors, thick ropes to cover their hands and forearms, and would sometimes cover their wrapped hands in glue and broken glass, until thick gloves and metal groin cups were introduced in the early 1900’s and became mandatory shortly thereafter. Groin hits, headbutts, and biting were banned from use in the sport as well, although they were all legal attacks until the 1930’s. In any case, nobody actually knows the accurate history of Muay Thai up until the early 1900’s. Everything known about Muay Thai before that time is based purely upon hearsay, legends, and poorly recorded texts. Kind of like the bible!

Another side to Muay Thai is the clear and distinct fitness benefits. A Muay Thai class starts with skipping rope for 3-5 minutes, followed by 15-30 minutes of pad hitting, followed by 10-15 minutes of conditioning workouts such as pushups, situps, burpees (a pushup followed by a jump, repeated several times), etc. Typically students cool down on their own. In Thailand, however, all vomit-inducing sessions start with a brisk run of between 3-15km depending on your ability, 5-10 minutes of skipping rope, and then as many rounds of pad hitting as you can handle. Most studies regarding Muay Thai’s fitness benefits estimate that an average person will burn upwards of 800 calories in one one-hour training session. Most sessions in Thailand last an hour and a half, and most fighters train twice a day. It’s their job – train, eat, nap, train, pee a little blood, eat, sleep.

Fighting is, in essence, the main purpose of Muay Thai, but’s not as simple as stepping into a ring and kicking your opponent in the head. It takes loads of practice and dedication. Plus you must learn the traditions of Muay Thai, such as performing the “Wai Kru” which is a sort of ritual dance before you fight to honor your trainer and gym, and get yourself into the right state of mind to get kicked in the leg 30 times. It might look a little ridiculous to people outside the sport, but once you do it you realize you can’t go without it. I’ve had 2 girls leave me for doing the wai kru before having sex with them, but in my defense they were needy and impatient. Just kidding, that never happened. But I digress…once you’re done the wai kru, the ref tells you not to smack each others’ nuts, you go back to your corner, bell rings, and it’s game time.

Now the thing that a lot of people seem to have a tough time wrapping their head around is that fighting in the ring isn’t really like “fighting.” Most people take the first round to figure out their opponent’s weaknesses and strengths, then start building steam in the following rounds. It takes skill and sharp senses to predict your opponent’s next move, and also to keep your opponent guessing as to what you’re about to do. Your mind figures everything out, your body only does what your mind needs it to do. Then again, some fighters (usually first-timers) enter the ring and go balls-out swinging, throwing grenade-like fists and kicks at their opponent. You’d think that works, but really those people get knocked out pretty fast by a sharper, more alert and aware opponent.

If you’re curious about Muay Thai but worried that it’s all about face smashing, leg kicking, and blood peeing, check out a class at a local gym sometime. Fighting sports are rapidly growing in popularity, causing MMA and Muay Thai gyms to pop up like that rash you got that time you slept on your friend’s bed that smelled like sugar crisp and salmon. In the gym I train at, there are about 140 people doing Muay Thai, and only a dozen of us are fighters, which goes to show that the vast majority of people who do Muay Thai do it for the fitness and self-defense aspects of it rather than the fighting. But if you’re interested in fighting, your gym will get you in the ring as soon as you’re ready. Just make sure you’ve cleared up that rash or they won’t let you fight.