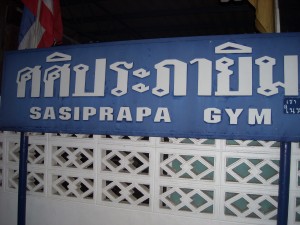 Sasiprapa gym is one of the big names here in Bangkok and if you have any doubt regarding their ability to produce quality fighters, your concerns can be laid to rest with just a look at one of the multiple trophy displays throughout the gym. Sasiprapa gym earned the “gym of the year” award in 2007 and it currently sits in the top 10 gyms as ranked by Lumpinee stadium. However, with all this prestige, there was a serious lack of students when I went. As a matter of fact, there was only one other “farang” training while I was there and I went for the afternoon session – which is usually the busiest time.

From where I’m staying (central Bangkok in the shopping district), it’s quite the journey to get to Sasiprapa gym. I had to take the sky train, then switch to the subway, then jump into a taxi for another 15 minutes or so. The area where Sasiprapa gym is situated didn’t seem to have any foreigners. At least, not that I saw anyway. When I tried to get a light meal before my workout for some energy, none of the servers spoke any english whatsoever. Luckily, one of the resteraunts had photos of some of the plates on the wall so I was able to just point to what I wanted. So, if you come train at Sasiprapa gym, I suggest you brush up on your Thai a bit before coming.

As soon as I approached Sasiprapa gym, I was immediately greeted by my trainer for the day. Honestly, I don’t remember his name but in all fairness, he forgot my name as well since he’d just yell “you” to get my attention.

Unlike every single Muay Thai workout I’ve ever done in my life, the training session at Sasiprapa gym didn’t begin with skipping. Rather, he just had me perform light, rapid punches on the heavy bag while moving my feet up and down. Punch with the left hand, stomp with the left foot – and vise versa. I remembered seeing Yodsanlkai Fairtex doing it with his trainer so if it’s good enough for Yod – then it’s good enough for me.

After the warm up, he had me move right into padwork. I didn’t really get the chance to stretch which is one thing I didn’t like. The padwork was decent and we spent a lot of time working on blocking, countering and elbow strikes. Actually, throughout the workout, I did A LOT of elbow strikes as you can see from a photo I took about 5 hours after the session.. 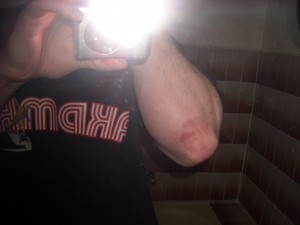 After the padwork, we did about 5 rounds on the heavy bag but what’s cool is that I had the trainer there watching over me the entire time. I did one round for regular Thai kicks, one round for front kicks, another round strictly for elbows, one for boxing and lastly, a full round dedicated to only low kicks. I was exhausted at this point so to finish up, I just did about 3 sets of narrow grip chin ups for clinch strength. From there, I called it a day and just walked around and snapped some photos and took a video of the place. Here’s a video tour..

Here’s a photo of my trainer for the day. I’m not sure how old he is but I’m sure he’s got a lot of fights under his belt. 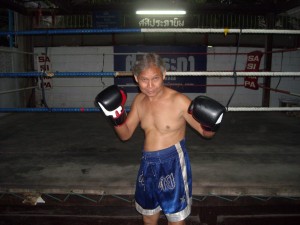 So, for my final verdict on Sasiprapa gym – it’s pretty good. You get a lot of attention since there’s certainly no overcrowding and the trainers seem like they legitimately want to help you. There’s plenty of affordable accommodation in the area as the Sasiprapa gym is situated in a predominantly Thai residential area in Bangkok. For me personally, I just prefer not to train in Bangkok due to the dirty air but to each his own. If you’re in the area, Sasiprapa gym is worth checking out.