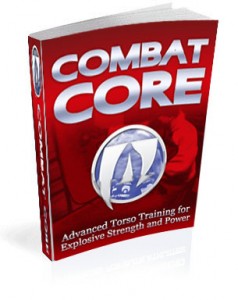 Combat Core is basically an e-book & DVD series that demonstrates all kinds of crazy, yet innovative exercises designed to improve the strength of your core. Most of the exercises are designed to improve rotary strength, which is important for basically all of the movements you perform in a fight. Throwing a punch, a Thai style kick, a Judo throw – the effectiveness of these fight-related movements are dependant on core strength.

The book is written buy a guy named Jim Smith, who is the co-founder of Diesel Crew. The Diesel Crew guys are known for coming up with all sorts of wacky, yet effective exercises that are very specific to fighting. Jim Smith holds the CSCS (Certified Strength and Conditioning Specialist) designation which is perhaps the most sought after and respected certifications in the personal training industry.

If you check out the combat core pitch-page, you’ll see testimonials from some of the industries most respected “guru’s”. Alwyn Cosgrove and Ross Enamait are a couple of the standouts. While both of these guys have solid reputations in the industry, there’s always the possibility that they just give a testimonial without reading the book so they could get some exposure for their own sites (unlikely but a definite possibility).

My Personal Opinion of “Combat Core”

Is “Combat Core” Worth The Money?

Honestly, I think it depends. Whether combat core is worth the money or not all depends on whether or not you actually implement the exercises into your workouts. If you just order the book, look it over, think to yourself “ya, that’s sort of cool” and never actually try the movements, the combat core book will be a complete waste of money.

On the other hand, if you read combat core and actually perform the exercises on a regular basis, then absolutely, you’ll get a good bang for your buck. It all depends on how dedicated you are.

Recommendation – YES, but only if you’ll actually DO the exercises.