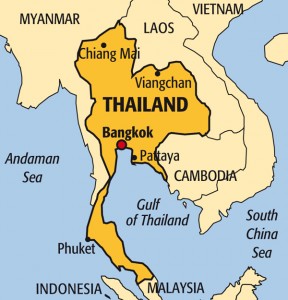 So I’ve been back in Canada for the last couple weeks and I’ll be here until January 5th, which is when I’ll be flying back to Thailand. I previously wrote up an entry called Reverse Culture Shock, which was basically about the differences between living in Thailand and living in the West. Well, most of what I said in that entry still applies but at least this time, I’m enjoying being back a bit more since I was away for so long. I also know it’s just a temporary visit so I’m thinking of it more like a vacation.

My friend that I flew back with though isn’t so lucky as he’ll be staying here throughout the entire winter. One of the guys at Team Quest gave him the nickname of of “P.C.N” – which stands for Porn/Cookies/Nap in reference to his probable daily schedule when he gets back to Canada.

Anyway, I obviously have a lot of free time on my hands since I’m not training here and I’m barely even leaving the house because it’s so cold. So, I figured I’d write up an entry answering a question that I get asked quite often.

Where is the best place to train in Thailand?

Rather than getting into the specific gyms – as there are so many variables and also due to the fact that there are 20+ individual gym reviews on this site already – I’ll focus more on the locations within Thailand. I’ll be profiling the differences between Phuket, Bangkok, Pattaya and Chiang Mai as I’ve now spent enough time in each region to provide some insight.

Phuket was the first place I ever went too in Thailand and in total, I’ve spent about a year and a half there. The biggest draw for me at the time was the beaches and there seemed to be a lot of places to train since the most heavily marketed gyms (the ones that always seemed to pop up during my searches on Google) were all located there. I just assumed that it was the ideal place to be.

The positives are fairly self explanatory as Phuket is an island with some really awesome beaches and fresh air. The negatives though relate to motives of some the people and the price for services.

Transportation can be a problem here because the taxi drivers (red taxis) are mafia and have somewhat of a monopoly on the fares that they charge. The only way around it is to rent a motorbike, which isn’t something I’d recommend since crashes are the leading cause of death here in Thailand.

Food is also more expensive in Phuket (roughly 2-3 times the price compared to other regions) and while it’s possible to find inexpensive restaurants/food stalls that cater to locals, you’ll usually have to go out of your way to do so.

Regarding the girls in Phuket, most of the ones you’re likely to encounter in the nightclubs will be prostitutes from the Northeast region of the country (especially in Patong).

In fact, the majority of the locals that you’ll likely encounter in Phuket will be from other areas in Thailand and will be there solely for the purpose of earning money.

That’s fine of course; the tourism is good for everyone. However, it causes Phuket (particularly the more touristy areas) to feel like somewhat of a fantasy land rather than “real life” (if that makes any sense).

As for the Thai boxing here, it’s certainly possible to find high level training since that’s entirely dependent on the trainer that you end up with. There are plenty of high level fighters (even former champions) who have finished competing at the highest levels in Bangkok and the Northeast and have now settled into jobs as trainers.

That being said, the overall skill level of the students is a lot lower compared to Bangkok. Again, I think that comes down to the heavy promotion and the “training holiday” niche that the gyms are marketing towards. That’s not a big deal at all though, you can always try to clinch and spar with the trainers instead of your fellow students if you’re more advanced.

Since Phuket is such a popular training destination, a lot of the gyms can get quite busy at times. The overcrowding can clearly put a limitation on the amount of personal attention you get. Unless of course, you opt to pay more for “privates” – which is basically a Western influenced up-sell to the training that’s almost exclusively done in Phuket. Not every gym gets crowded though and you’re less likely to experience this if you visit during the low season.

For the first 3 years of coming to Thailand, I always tried to avoid Bangkok. If I wasn’t there to catch an international flight or do some quick shopping, I wouldn’t be there at all. It’s quite crowded in most areas and being an asthmatic, I’m especially sensitive to the poor air quality due to the pollution.

On my latest trip however, I ended up meeting my current girlfriend my 2nd day there (just before I had planned to leave) and when that happened, I was pretty much tied down to the city. As time passed though, I started to enjoy a lot of the positives that the city had to offer.

The positives of training in Bangkok clearly outweigh the negatives however, for myself personally, the negatives (crowds, pollution etc.) are substantial enough to where I got sick of living there and needed a change.

Regarding the higher cost of training in Bangkok, several gyms there charge anywhere between 10k-15k baht for training, but if you look around enough and negotiate a bit, you can find top gyms that will charge you 300 baht per session or around 8000 baht per month.

The entertainment options in Bangkok are quite good but it’s a mega-city with nearly 10 million people so you’d expect there to be a lot of things to do.

Getting around in Bangkok can go from one extreme to the other depending on where you are in the city and the method of transportation that you’re using. Like I just mentioned, there’s nearly 10 million people here so traffic can be a nightmare.

However, if you’re able to avoid traffic jams, then getting around in a standard taxi is quite convenient since they’re easily found (I’d say about 4/10 cars that you see on the roads are taxis) and they’re very inexpensive.

There’s also a sky train and a subway system that are both great and completely eliminate the traffic issue. I’m living right near a subway station (MRT) as I write this and since I moved here, the traffic is a non issue. I find the subway a lot less crowded than the sky train as well and for about 45 dollars per month, I can get an unlimited use pass that I use to get all around the city.

I haven’t spent as much time in Pattaya as I have in both Phuket and Bangkok but considering what the entire purpose of the city is, people aren’t really supposed to spend a lot of time there anyway.

The 3 months of consistent living plus the several weekend trips were more than enough for me to get a feel for what the place is about.

Pattaya is basically the sex capital of the world. It’s about a 2 hour drive from Bangkok and like Phuket, it’s a beach town that thrives on tourism.

However, the quality of the beach (and the people) are of a lower standard. I can’t think of a better place to sit with a beer and people watch than in Pattaya.

Admittedly though, the place is one of the most popular tourist destinations in Asia so there’s certainly some appeal there (aside from just the hookers).

Expanding on that last “negative”, it can be hard for a lot of people to stay focused in this type of city. Pattaya was actually ranked as the number one “sin city” in the world by Askmen.com

It’s basically a non-stop party so if you’re at all serious about your training, then you should treat it for what it is and just go there for a weekend here and there.

Pattaya is also like Phuket in the sense that the “locals” aren’t really locals at all as most of them have come from upcountry and are there for the sole purpose of making money – which gives the place a less authentic vibe. It’s a fantasy land basically.

I’ve spent about a year living up in Chiang Mai and it’s really somewhere I can see myself living long term. Chiang Mai is ideal if you’re coming with your girlfriend, not looking to party much (as the nightlife isn’t as vibrant as the other areas) and don’t mind the fact that there isn’t a beach.

Chiang Mai is a university town and unlike places like Patong and Pattaya, you can easily find legitimate, educated, “normal” Thai girls here. You can in Bangkok as well.

Perhaps my favorite things about Chiang Mai though are food and the markets (and the food IN the markets). Seems like everywhere I look there is someone selling fresh fruit shakes. In the mall across the street from the gym they’ll do freshly prepared vegetable juices for about 60 cents. I usually drink at least a couple of those right after my morning run to start the day.

You can get fruit shakes and vegetable drinks anywhere in Thailand really, but it’s worth noting simply due to the convenience of finding these things in Chiang Mai. I seem to find the stuff everywhere I go.

Getting around the city is also quite convenient. There are red taxi’s constantly driving around called Songthaews. If you see one, you can just waive it down, tell the driver where you want to go and pending the distance, he’ll take you there for a flat fee of 20 baht (roughly 60 cents).

Decide what’s best for you..