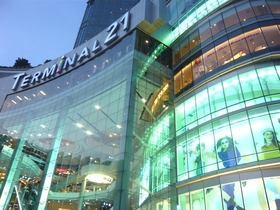 In total, I’ve spent about a year living in Bangkok and as you could probably tell from some of the posts on this site (this one and this one for example), it’s been far from my favorite city. The pollution, the crowds; I really didn’t enjoy my time there and the only reason why I lived there for as long as I did is because my girlfriend lives and works at her family business in the outskirts of the city.

Recently, I decided to take a break from Chiang Mai (as I had to do my periodic visa run across the Cambodian border) so I spent the past week in Bangkok. This time however, I was staying in a hotel just a short walk from an MRT (subway) station. The convenience of the location meant I didn’t have to spend the bulk of my time sitting in traffic, inhaling exhaust fumes and being barked at by potentially rabid street dogs on random soi’s.

Towards the end of the week, I felt like I didn’t even want to leave. Being a metropolis of 12 million people, Bangkok offers seemingly endless entertainment, food and shopping options. Since I was based so close to the rapid transit system, I had easy access to everything! I timed it and the duration from station to station on the subway is usually less than 1 minute.

This meant I had amazing food options (the new “Terminal 21” mall was my favorite spot). If I wanted to head to the shops around Lumpinee to pick up some gear, that was easy too (check out these new “Twins Special” MMA shorts). Most importantly, I found a great place to train which was just a 10 baht motorbike taxi away from where I was staying.

The gym is called “Watcharachai Gym” and it was recently opened by Watcharachai Kaewsamrit. Watcharachai was a Raja stadium champion, Thailand champion, WMC champion and he won the prestigious “fighter of the year” award in 2000 after winning all 13 of his fights that year. I really enjoyed the 3 sessions that I did there so at the end of this month, I’ll be moving back to Bangkok on a permanent basis. Also in the area where I’ll be living is Jitti gym, Lukbanyai and Kiatpetch. Here is some footage I took of one of the young fighters doing pad-work at Watcharachai Gym..

With my upcoming move to Bangkok, I’ll likely have a lot more to write about (I know these entries have become a bit stagnant lately). Another huge bonus to being based in Bangkok is that there are a couple well known BJJ schools there (BKKBJJ and Q23 Academy). Both schools have black belt level instructors. The head instructor at BKKBJJ, Ben Weinstein, is a black belt under Eduardo Fraga and the head instructor at Q23 is Adam Kayoom; a One FC fighter and black belt under American Top Team’s Ricardo Liborio. Also, based on the pictures I’ve seen of both facilities, there are plenty of blue, purple and brown belts training there as well.

Not that I couldn’t learn from a blue belt (as my experience is limited and I’ve never even put on a Gi on before) but having a lot of high level (and hopefully helpful) training partners to roll with and learn from is definitely a good thing. The price is right also at around 3000 baht per month for unlimited classes.

In the remaining time that I have left here in Chiang Mai, I’ll check out some of the other gyms in the city and give some feedback. Speaking of which, I’ve done a couple sessions at KC Muay Thai and so far, I’ve been impressed. The facility itself is nice and open, the trainers are fluent pad holders and there’s an awesome vibe during the training sessions. I’ll put up a more detailed review of the gym (as well as Lanna Muay Thai) in a couple weeks.