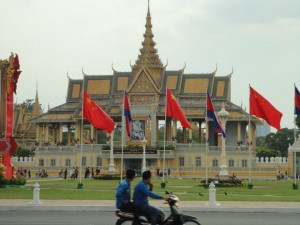 In my last entry, I had mentioned that I was writing it from Phnom Penh, Cambodia. With my current visa, I have to leave and re-enter Thailand every 3 months. Usually, I just do a quick border crossing and re-enter Thailand within 5 minutes; not having experienced a new country beyond the immigration point.

This time however, I figured I’d plan ahead, book a flight and actually get a new experience. The advanced booking idea paid off and I was able to find round trip flight to Cambodia for 60 dollars (all taxes included).

Despite dealing with a couple Cambodian girls back in Canada, I really had no idea what to expect as I knew nothing about the country.

Well, that’s not true. I knew that the Cambodians claim that they’re the original inventors of “Muay Thai” (though they would definitely disagree with the name) and that “Angkor Wat”, which is located in Siam Reap, is something everyone should see in their lifetime (so I’ve been told).

I didn’t make it to Angkor Wat this time (as I was in an entirely different city), but I did take the time to check out a Khmer kickboxing school.

The gym was called Paddy’s (photo here) and was located about 10 minutes via taxi from “Riverside”, which is where I was staying. The cost for training was 6 dollars (they use US currency there) and for that 6 bucks, I got a full 5 rounds of pad-work and a bit of follow up instruction.

I noticed a few subtle differences between Pradal Serey (Khmer Boxing) and Muay Thai. For instance, the trainer immediately corrected the way I was throwing my elbows. He got me bend my arm more in order to ensure that I was connecting with the sharp point of my elbow.

He also told me not to do a switch step when throwing my left kick. Instead, he wanted me to take a step forward (not to the side at all) and throw it from there – which was also a change to what I’m used too.

The knee strikes were a bit different as well; with more emphasis on maintaining an upright position and less emphasis on driving the hip forward. Everyone here seemed really nice so definitely check it out if you’re ever in Phnom Penh.

One thing worth noting is that everyone I encountered during my trip spoke excellent English. It was a bit surprising. The locals were also really nice as well. I went to the mall on my second day there and while I was walking around, I was approached on two separate occasions.

The first was a middle aged man with his daughter. He initiated a conversation by asking me something about the Fairtex jersey I was wearing and then just started talking about Canada (as I mentioned I was from there) and that his daughter was planning on moving there for school.

Whenever some random approaches me and initiates a conversation, I always have my guard up as I’m under the impression that they’re trying to hustle me somehow.

Both times I was approached and chatted up in the mall however, it was legit. Just a few minutes of friendly conversation (perhaps they wanted to practice their English) followed by a handshake and a smile to finish things off.

After spending a few days here, and experiencing the hospitality and the friendliness of the people, my visit to the “killing fields” during my final day there was particularly disturbing.

If you didn’t know, Cambodia as a country has had it extremely rough and much of the poverty that exists there today is a direct result of the events that took place between 1975-1979 (following the Vietnam war).

Well, I suppose things took a turn for the worse a little bit before that when the United States bombed the fuck out of them (killing 600,000 people) despite their neutral stance during the war.

Anyway, I know I didn’t pay much attention in history class but damn, you’d think I’d remember being taught about a genocide in Cambodia that wiped out 25% of the entire population. I really had no idea.

I started doing a lot of research on it as I had booked a tour of the Choeung Ek “killing fields” and I wanted to learn as much as I could prior to going to enhance the experience.

So, from what I gather, after Cambodia had been bombed by the United States during the war with Vietnam, thousands of Cambodians were left homeless.

During this time, a communist group known as the Khmer Rouge were the leaders of the country. The group was lead by a sick fuck named Pol Pot, who had visions of setting back to “year 0”. Pol Pot believed that big cities were evil and he wanted everyone to live off the land.

With the country in shambles following the war, Pol Pot, who was a great speaker, brainwashed the vulnerable (now homeless people) and when the American troops left, the Khmer Rouge sealed off the border with a shitload of land mines. What begun from this point was a 4 year period of horror.

While they still had the trust of the people, the Khmer Rouge was able to evacuate Phnom Penh by telling everyone that the Americans were going to start bombing the capital.

The entire population was moved to the countryside and the city was left a ghost-town. When they arrived though, families were split up and as a first order of business, anyone with connections to the outside world and anyone with an education.. was slaughtered.

Doctors, Lawyers, Engineers.. basically anyone with a voice of reason to get through to the people and convince them to rally against Pol Pot and the Khmer Rouge was disposed of immediately.

From there, the killing spree continued over the next 4 years until 25% of the population had been murdered. The details of it all are too elaborate to write out here so check out this documentary if you’re interested..

As for where the Choeung Ek killing fields come into play, well, it was just 1 of the many sites set up around the country where people were brought to be executed.

When I arrived, I was given an audio player that explained what occurred at each “station”. As I walked throughout the fields, there were certain areas where you could see teeth and bones sticking up from the dirt. Here’s a picture.

Perhaps the most disturbing part of the tour was the “killing tree” station. According to the audio tour, this is where they murdered the children. When the Vietnamese discovered the killing field (after they overthrew the Khmer Rouge), they found this particular tree stained with blood and embedded with skull fragments.

Here is a picture of the “killing tree”. What the Khmer Rouge would do is grab the children by their ankles, swing them, bang their heads against the tree, then toss their lifeless bodies into the ditch to the right.

It’s really fucked up what some humans are capable of doing and what’s even more mind blowing is the fact that this was done to their own, innocent people!

If you’re interested in seeing more pics, here is the monument they built to pay tribute to all that lost their lives at this particular location (9 levels of human skulls).

Anyway, moving on from the depressing history of the Khmer Rouge, my final activity while in Phnom Penh was a trip to the one of the infamous shooting ranges.

I had some knowledge of the shooting ranges in Cambodia prior to arriving as I had seen Youtube videos of tourists firing rocket launchers and throwing hand grenades.

Rumor has it that they also allow tourists to blow up cows, but according to the taxi driver that brought me there, they stopped doing that a while ago – which is obviously a good thing.

When I arrived, they presented me with what appeared to be a menu of my options. I had done a bit of research before hand and was set on firing the AK-47. The cost was 40 dollars for 25 rounds (which is more expensive than the “gun store” in Las Vegas).

I’m not planning on visiting Vegas anytime soon and I had never fired a gun in my life so I figured the experience would be worth the 40 bucks (and it was). Here’s the video..

You probably can’t tell from the video but I missed the target every single time, despite wearing my glasses and lining up each shot as best I could. The gun felt really powerful too and was tough to keep stable when it was set on automatic.

Watching the guy in the video below miss the target also made me feel a bit better about it. Apparently the AK-47 is designed to focus on doing as much damage on impact as possible, with less of a focus on accuracy.

Anyway, my overall impression of Cambodia was a good one. It’s much less developed than Thailand (likely for reasons explained above) and the level of poverty is much higher; though I always felt pretty safe.

The people were all quite friendly and I’ll definitely be going back; most likely to check out Angkor Wat on one of my upcoming visa runs.

I’ve sort of caught the travel bug again and I figure I’m going to make the most of having to leave Thailand every 3 months and actually experience new countries and cultures.