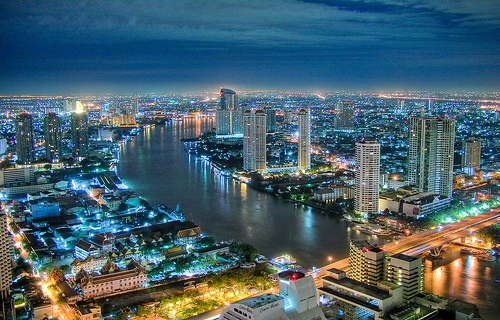 Sorry for the delayed update. As you may have assumed, things have been pretty hectic. I’m writing this entry from an internet cafe since I can’t seem to find an adapter for my laptop. Since I’m using a public computer, I won’t be able to upload my pics and vids on here just yet for you guys to see.

So where to start?

I landed in Bangkok at around midnight on the 27th. From the airport, I took a taxi into the heart of Sukumvit (Sukumvit is a popular area in Bangkok that’s highly populated with hotels.) The driver just dropped me off around Sukumvit 19 and I checked into the first hotel I saw. It was a little pricey at 1300 baht a night (about $40 US), but it was pretty pimp – I have to admit.

The first thing I did upon arrival was go for a walk. I was immediately targeted by seemingly every Thai person that saw me. They see foreigners and immediately assume that we’re all rich. Nothing but walking ATMs to them I think. I was offered everything from motorbike rides to massages; clothes to… vaginas? Yup, in Thailand, everything is on offer.

I always get mixed emotions when I come to Thailand and this time, so far, is no different. The people are so friendly. And because of that, it’s often hard to see some of the disturbing images that are on display.

One image that took me a while to shake off was one of a girl (she must have been about 4 years old) sitting on an overpass, alone, with a change cup for people to donate. I gave her some money (which I later found out is illegal) and asked her “you have mom?” She replied with a “yes.” I then asked her if she was ok and again she obliged with a “yes.”

Still, any 4 year old girl that is sitting alone on an overpass in the heart of Bangkok at midnight is definently not “ok.” I was telling the story to a girl I met later on in the night (that’s right, I’m a player) and she told me that it’s most likely just a trick that they do to get people to pity her and that the mom was probably off in the distance keeping an eye on things. Who knows for sure though.

In the more populated nightlife districts, you’ll often feel a slight tug at the thigh level of your pants. You look down and see a tiny child (again around about 4-6 years old) holding a handful of roses. Most people just think it’s cute and buy a rose or two for the girl they’re pursuing for the evening but it goes much deeper than that.

These kids are forced to sell the flowers. And at the end of the night, if they haven’t sold enough, they get beat up by older Thai men. The girl I was talking to about it said that one of the young boys had a really bad cut on his forhead about a month prior from a beating, and she pushed his hair back to show me the scar. I asked the kid what happened and he didn’t even reply. I knew by the look in his eyes though that the girl I was talking to was right – he had been beaten.

In Thailand, it’s easy to get caught up with all the excitement and incidents like that are often overlooked.

Anyway, I decided to get out of Bangkok after only 2 nights. It’s not for me. The air is so dirty that you’ll often see the Thais wearing masks over their mouth and nose. If they aren’t willing to breath the air in their own city, then neither am I. However, I will be going back and giving you guys an inside look at all the most popular camps there. It’ll all come later on.

Right now I’m in Pattaya and honesty, this place is insane. I’m pretty sure it was ranked as the number one “sin city” in the world by askmen.com. I fully agree! I’ve been walking around and filming some crazy stuff that I’ll upload for you guys to see in my next entry. I’m also just getting myself settled and I went to check out Scorpion Gym today. I have a video tour of that gym as well.

Anyway, it’s about 8pm right now. The streets are live, the girls are out, and I should be too. Honestly, the next entry and videos that accompany it are going to be insane, so stay tuned. Unless you have a problem looking at insanely hot Thai girls. If you do (I hope you don’t), just skip over the next one then.

I start training tomorrow as well, so hopefully I’ll be able to get some good footage of Ekapol (former Lumpinee champion) in action.