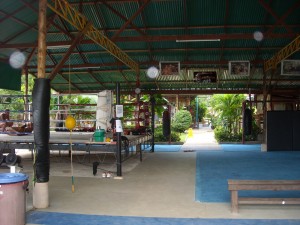 I was awoken today not by an alarm clock, but rather, by the sounds of shins smashing against the leather Thai pads, grunts of exertion and of course, some Jay Z pumping through the stereo speakers. When you’re here to train, that’s a whole lot more motivational than a cell phone or a radio. I walked out of my tiny room which is situated at the back of the camp and saw a group of about 20 or so guys – who were decked out in Koral, Tapout and pretty much every fight related clothing line you can think of – rolling on the mat. One guy pulled off the slickest Kimura and by seeing that, I was more motivated than ever (and all this while I was on my way to take a morning shower).

While I was supposed to arrive here at Tiger Muay Thai two days ago, I ended up arriving yesterday (Wednesday) afternoon. I missed my flight that was scheduled on Monday due to a lost cell phone, an “ice-addicted” prostitute and a forgotten wake up call. Actually, perhaps I should elaborate a little on that. At around 2am on Monday morning my cell phone went missing. Perhaps it just fell out of my pocket or maybe I was pick-pocketed – I’m not really sure. My cell phone is my alarm clock and I had a taxi scheduled to pick my up at my apartment at 10am (which meant I had to wake up at around 9).

Here’s the kicker: the taxi driver was instructed to call my cell phone upon arrival. I asked the security personnel in the lobby of the apartment if they would be able to come to my room and wake me up. “No problem” he says. I even offer him a days salary for doing so. I then started to have my doubts that the task would be completed. I really didn’t want to miss my flight over this. It was too late to buy a new phone and I couldn’t call any of my friends as I had just lost their numbers. So fuck it I thought, this was Pattaya, I could just rent a girl to stay the night and by doing so, I’d also be renting an alarm clock via their cell phone.

I headed down to insomnia nightclub, spotted an attractive girl and without hesitation, I approached her with my request. I think she was a little put off by it. “No sex? I just have to wake you up at 9am and you pay me 1000 baht?” she asked. I confirmed and we headed back to my apartment via a motorbike that her friend was driving. When we arrived, she asked me if her friend could come up because they had to “talk”. I really didn’t understand why they had to go to my room to “talk” when they could just do so in the lobby of the apartment but whatever, we went up.

Once in my room, the girls friend asks “can I smoke something?” “Something” being the key word. I assumed she was talking about a cigarette so I said “alright”. Well, I’ve never seen a cigarette being smoked like this. I honestly don’t know much about drugs but I think they were both taking hits of “ice” – as they call it here. I just told them to get the fuck out so I could get some sleep. In a country where drug usage can carry a death sentence, I don’t see why I’d even risk my freedom by placing myself on situations like that. Once they left, I went back downstairs to confirm that the security guard would indeed still wake me up. “No problem” he says again. So I put my worries to rest (literally), and go to sleep. I think you know where this is going. I woke up the next day at 12pm and obviously missed my flight!

Anyway, back to the topic at hand – Tiger Muay Thai. Upon arrival, I was instantly greeted by a friendly staff and a bottle of cold water. I had a look around the place and I have to say, this is the biggest Muay Thai camp I’ve ever seen. There’s multiple rings, a cage, a traditional gym area, a restaurant, and it’s all broken down into different sections (beginner, intermediate and advanced). They have all sorts of bungalows situated around the camp ranging in price from 4000 baht to about 22,000 baht per month. Of course, being as cheap as I am, I’m in a 5000 baht a month one (and that’s only because the 4000 baht ones are currently full).

I still haven’t had a chance to train yet as I spent yesterday unsuccessfully trying to sort out an issue with my visa (you’ll be hearing more about it later as it looks as though I’ll be doing an entry from Cambodia or Penang). My first workout begins today at around 4pm. One thing I’ve noticed here at Tiger Muay Thai is that they seem like they’re really on top of things in terms of organization. They have a detailed training schedule and the right staff in place to accommodate the needs of the guests. The guest relations manager (Samai) has been going out of her way to help me fix the issue with my visa. They have a free weight area and a friendly conditioning coach that roams around helping guests with their form.

Tiger Muay Thai is situated in a very isolated environment and that has both its positives and negatives. The positives are fairly obvious as their aren’t many distractions. The negatives, well, I find that things aren’t as accessible as I’d like. The other night, at around 10pm, I was hungry and the tiger muay thai restaurant was closed. There were no taxi’s around, I don’t have a motorbike and the nearest 7-11 is about 3km away. It was my first night here and I wasn’t even sure exactly where the 7-11 was so rather than just walk around in the dark aimlessly, I ended up going to bed hungry. Needless to say, my fridge is currently stocked up with all sorts of snacks and drinks so I won’t have the same problem again. I suppose the solution to that is simply to rent a motorbike for about 100 dollars a month. Actually, if you’re staying in Chalong, renting a motorbike is a must. A second negative is the fact that I’m unable to access the wireless connection from my room. However, in all fairness, I’m staying in one of the new budget rooms (pink rooms at the end of the video tour below) and these are brand new. I imagine they will likely be getting a strong wireless connection to service these rooms later on. They actually just installed the cable TV today so I’m sure it’s just a matter of time.

Other than the internet connection and the accessibility of things, I’d have to say – so far so good. Of course, it’s a little premature to fully assess things as I haven’t even started my training yet. One cool thing though – I was just informed that Jon Fitch (the worlds number 2 ranked welterweight) arrived today and will be training for a month. I’ve already had the opportunity to train alongside Muay Thai great; Yodsanklai Fairtex – and now I have the opportunity to train alongside one of MMA’s elite as well.

Here’s a brief video tour I took of the facilities at Tiger Muay Thai. In a future entry, I’ll take some video tours of the rooms and bungalows that are available here (there’s a lot!).