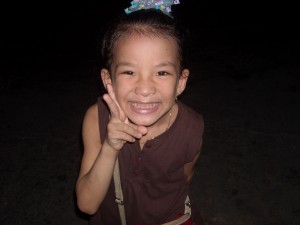 We’ve all heard it many times throughout our childhood. We’d complain about what we were being served for dinner and our parents would give us the old “you should be grateful, there’s kids in (insert 3rd world country here) that don’t have any food at all”. That comment never really had an effect on me because after all, I was in Canada, and I didn’t want to eat the fucking meatloaf or whatever it was that I was being served that I didn’t like. Yeah, I know there’s kids in poor countries that had it worse than me but, “out of sight, out of mind”. I didn’t really think about it.

Well, there are things that I see on a daily basis here in Thailand that really put things into perspective. For example, last night was Saturday and if you’ve been following my entries, you know that I go out drinking on Saturday nights. And yes, I know it’s not good for me but I view it as a reward for training hard all week. Anyway, I was about 11 or 12 drinks into the evening and it was about 4:30am while I was walking to a club appropriately called “Insomnia”. I was with a really hot girl too. Money hungry, yes .. but hot nonetheless.

While we were walking towards the entrance, a little boy (he was about 8 years old) ran up, grabbed my leg and tried to get me to buy a pack of gum. “Mai Me Sataing” I said. Mai Me Sataing is Thai for “I have no money”. It’s become an automatic response along with “Mae Ow Khap” (no thank you) because as a foreigner, I’m constantly being hit up to buy shirts, suits, bootleg movies, watches and as I mentioned in an earlier post – vaginas.

As I was walking towards the club entrance, the journalist in me (I guess that’s what I am now) kicked in. Why is this 8 year old kid selling packs of gum at 4:30 in the morning? Where are his parents? What is the money going towards? So, I had a decision to make. I could either go into the bar with the girl I was with and spend a ton of cash on overpriced drinks for her and her sister or I could go and talk to the kids. I chose the latter. After all, I was too drunk to “boom boom” anyway.

There was actually a lot of them out there. I’d say about 10 or so. The first girl I talked too was 14 – which is about the same age as my little sister. She was selling glow-sticks which, when you think about it, is pretty smart. She’s selling glow-sticks in between 2 after-hour nightclubs that are full of E-Heads (ecstasy users). She said she was using the money to pay for school (2000 baht per month) and her apartment (3000 baht per month). When I asked her where her parents were, she simply replied with “no hab” (no have).

The little 8 year old boy that tried selling me a pack of gum earlier walked by again so I waved him over. I gave him some money and let him keep the gum. After I gave him the money, he slapped my hand, turned it into a handshake, gave me 3 “daps” (“daps” are just a fist-to-fist greeting) and ended the combo with a peace sign. It was really cute actually. I guess he was selling enough packs of gum to afford a TV to watch hip hop videos on. I really wish I had got the handshake on video.

Some random girl then walked by wearing knee high boots and little jean shorts and started hitting on me. She was clearly a prostitute but I ignored her advances and decided to ask her about why the kids were up all night, alone, selling gum and glow-sticks to the club goers. She said that most of the kids are doing it because their parents are making them and that they’re not allowed to sleep until they make a certain amount of money.

I’ve mentioned that in Thailand, often times the kids are expected to provide for their parents but when they’re 8,9,10,11 years old – that’s a little extreme. After talking to the girl for about 20 minutes, I went looking for the cute kid that did the ghetto handshake so I could give him some money and also, so I could get the handshake on film. Unfortunately, I couldn’t find him again. I did however, come across this little girl…

I’d estimate that she’s about 7 years old and just like the others, she was working all night, alone, without any adult supervision. She told me that she wasn’t allowed to go home until she made 100 more baht and that her dad beats her mom etc.

Stuff like this really makes you think. I’ve seen so many orphan kids since I’ve been here. After seeing these kids last night, it makes me have an even greater appreciation for what they do over at Sityodtong (story here). Then of course, there’s the kids that I came across in Bangkok who were forced to sell flowers to the tourists and if they didn’t sell enough, older Thai men would basically beat them down (story here).

Anyway, I felt this was worthy of an entry. Since it’s sort of sad, I figured I might as well leave you with something funny. So, check out this old dude that was on walking street last night. As if the bright white hair and outfit wasn’t enough of an attention grabber. And yes, those 2 gigantic “ladies” he’s strolling hand-in-hand with are actually men. You’ll also noticed that he gets approached by one of the kids trying to sell stuff.

In my next entry, I’ll be doing a camp profile on Scorpion Gym. I also have a “Fon” update (yes, the crazy girl!) and now I’m even more convinced that she’s a psycho.