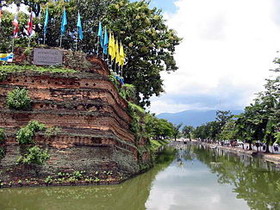 So once again, I’ve gotten distracted with things and there’s been a long delay between my blog posts. In my last entry (alright, my last couple entries), I’m sure you could tell that I’ve been getting frustrated with things here. Well, I’ve switched things up a bit and I’m writing this from a guesthouse near “Thaphae Gate” in Chiang Mai.

I’ve been up here for about a week now and I have to say, Chiang Mai is amazing. The city itself is beautiful, the weather is perfect, the food is delicious and the people are incredibly friendly. Taking a break from Bangkok and coming up here to Chiang Mai was exactly what I needed. I can’t remember the last time I’ve felt this happy. Being up here is giving me the same sort of feeling that I had when I first arrived in Thailand years ago.

Since I’ve been in a better mood lately, I figured I’d use this post to pinpoint certain things that I love about Thailand (rather than just complaining about the things I hate). For those of you who haven’t yet been here, hopefully this will give you some incentive to book and flight and see what all the hype is about. For those of you who already have; I’m sure you can relate.

For the most part, Thailand is the king of convenience. Something needs to be said for a country where there are multiple convenience stores, food stalls, fruit carts, laundry services and internet café’s per 3 block radius. Of course, this all depends on which area of Thailand you’re in (there are obviously remote areas) but if you’re in Bangkok, Pattaya, most areas in Phuket or up here in Chiang Mai, there’s no reason why you’d ever even have to cook single meal for yourself – which brings me to my next “love” in Thailand..

It’s not like you haven’t heard this before but the food here is amazing. Thai people have told me that they “live to eat” rather than the other way around. It’s pretty noticeable too. Go look at some random Thai girl’s facebook albums and I’d say there’s a 50/50 chance that there’s going to be some pictures on there of the past meals that have been served to her.

My girlfriend is a perfect example of this. She’s about 50kg and whenever we go out, she’ll order multiple meals (huge portions) and just leave half of it (something that’s definitely not a good thing when I’m the one paying for the bill). I just end up eating it though so I guess I can’t complain. As for which specific food items are my favorite, here are my recommendations.

Mango Sticky Rice
Mango Sticky Rice is a Thai dessert. It’s basically sticky rice blended with coconut milk with sliced mangos over top. The other day I ate some Banana Sticky Rice for the first time which is pretty much the same thing. Well, “same same but different” as they’d say here.

Kanom Koke
Kanom Koke is another epic Thai coconut dessert. Look out for it if you’re ever here because it’s somewhat rare and easy to miss.

Mini Pineapples
There are fruit carts selling pineapples all over the place and those are fine, but for every 100 regular pineapple stands that you find here, you might come across one selling the mini pineapples (which are more expensive but well worth the extra cost). It’s not often that I see a vendor selling these ones so when I do, I get over-excited and buy a few bags.

“ColdSnap” Shaved Ice
Unless you’re in Bangkok, chances are you’re not going to come across one of those and even then, I don’t think there’s very many of them. There’s one on the 2nd level of Seacon Square so I used to get one of these daily after my training sessions. It’s basically flavored shaved ice (the owner was telling me that his sister makes them) with a topping of your choice on top. Shaved Ice (and ice cream) places are all over the place in Thailand but this particular one is by far my favorite.

Actually, now that I’m getting into this, there’s way too much good food here to actually make a list. It’s after 3am and it’ll take me forever if I was to even attempt to list all my favorites. The food selection here is amazing so I guess I’ll just leave it at that and move on to the other things I love about this country.

The Variety of Landscapes and the ease of Travel

There are a few good low-cost airlines operating in Thailand that make travelling throughout Thailand easy and affordable. For example, I was getting bored of Bangkok so I paid 60 bucks for a ticket, got myself a flight and was in Chang Mai within about an hour after takeoff.

If you’re into the big city vibe, then you have Bangkok. Prefer the islands? You’re just about 60 bucks and an hour or so from Koh Samui or Phuket. How about fresh mountain air and peace and quiet? You could hit up Khao Yai. For me right now, I liked the “real life” feel of Bangkok but I hated the pollution and overpopulation so Chiang Mai is definitely the spot I was looking for. When I first came here about a year and a half ago, I described Chiang Mai as a big city with a “small town” feel and that’s exactly what it is (without the skyscrapers etc).

Thailand has so much variety in terms of the landscapes here and the ease of transportation makes hopping around from city to city as easy as it gets. It’s nice to be able to get a flight for around 50 bucks and not get hit up for a few hundred dollars in taxes and fees like I would in the West.

Sure, I complain about a lot of things but on average, the Thai people are very friendly – especially here in Chiang Mai. I guess it depends on your location in Thailand and of course, the individual that you’re dealing with. One thing I notice is that the overall demeanor of the Thai’s is dependent on the quality of tourists (farang) that the area attracts.

For example, while Pattaya has a lot to offer and a lot of “quality” people spend their vacations there, it also has a seedy side to it that attracts a lot deviants and criminals from around the world. If 70% of the foreigners there represent the lower 10% of our foreign societies, it’s sort of understandable that some of the Thai people eventually get fed up and develop a negative view of the foreigners that go there.

Having said that, I notice that I get treated better by the locals in the all-Thai areas where they haven’t had the same sort of negative dealings with foreigners as they would in a place like Pattaya. Chiang Mai is a perfect example of that.

Sure, there are a lot of foreigners here (both tourists and expats), but based on my initial impressions, the tourists here seem a lot more “wholesome” (if that makes sense) and have a greater respect for the Thai culture. Of course, there are always exceptions.

Another thing that I really find interesting is the overall unity that the Thai people have. It’s quite nice actually. Strangers will get each others attention by calling each other “brother” or “sister” (in Thai language of course) and when I get my girlfriend to make a phone call for me to inquire about something, it’s like she’s taking to her best friend for years on the other end of the phone even though it’s someone she’s never met.

Alright, This Is Getting Long..

I originally meant for this to be a quick update but I’m already past the 1,300 word mark and I’m getting tired. Thing is though, I think I could extend this to the 10,000 word mark if I wanted too because I can think of about a thousand things I love about living here. Something impresses me here pretty much daily. I’ve written pretty extensively about the laid back lifestyle that Thailand provides in my reverse culture shock entry and considering the fact that I haven’t even touched on the massages, the training or about 100 other awesome things about this place, I’ll probably cut this short now and get some sleep because I’ll be up all night otherwise.