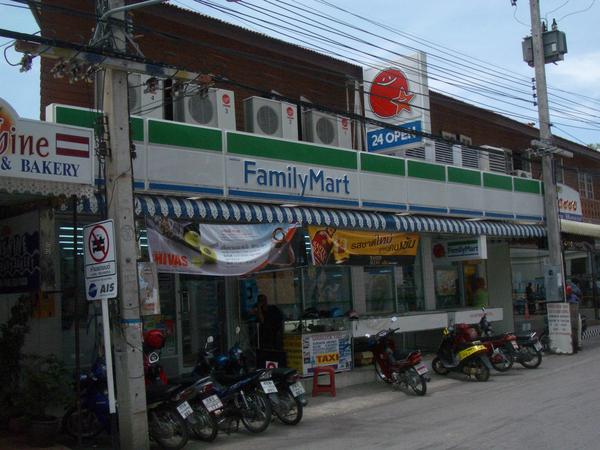 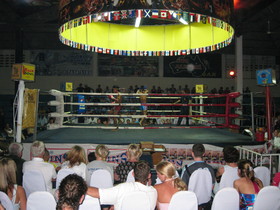 So last night I went to the stadium to watch some fights since a couple people from the gym were fighting and of course, because I was able to bypass the 1000 baht entry free – which is only 100 baht for Thai people. Actually, in the 10 combined months that I’ve spent in Thailand, this was the first time I went to watch live fights.

I just can’t bring myself to fork out 10-15 times the “regular” ticket cost based on my skin colour. Like I said in a couple other posts, just imagine the uproar this sort of duel pricing would cause in your home country. However, the one thing that’s actually good about it is the fact that the fighters get higher salaries as a result of the higher ticket prices – which is obviously a good thing. But still, I’d rather spend my 1000-1500 baht on 25-35 chicken/rice meals.

The fights were all pretty good and it was a cool experience, but I’ll come back to that. What I’ll get too now is what happened after the fights. I went to get some chicken soup at the same place I eat about 4 times a day once I had finished and was walking back to my room, I noticed some angry Thai guy yelling at some random shopkeeper.

At the exact moment I was passing by, he turned around and we bumped into each other. No big deal I thought. I just said sorry and did the “Wai” – which is a Thai greeting that involves putting your hands together and slightly bowing your head. According to Wikipedia, this is also a common way to apologize so it looks like I had it right..

Anyway, the guy – who was clearly drunk or high on coke – start screaming at me. It obviously got me a little upset but I figured it wasn’t worth it so I said sorry again and moved on. About a minute later (as I was walking towards my room) I heard the loud revving of a motorbike engine and I could sense it was pulling up beside me.

Great, just what I needed. The guy then proceeded to cut me off with his motorbike, step off and started screaming “you want to fight me?! ..you want to fight me!!”. Now, I’m fairly confident with my ability to defend myself – and I’m glad I have that piece of mind – but all bets are off when you’re alone in a different country.

The thing about Thailand is that when a foreigner and a Thai are fighting, every Thai within a 200 meter radius ends up jumping the “farang” – regardless of whether or not they know how the fight started. It’s bullshit, it’s extremely racist and it certainly demonstrates the fact that a lot of Thai people have some pent up rage towards foreigners – although they usually mask it with a nice smile and friendly demeanour.

As a matter of fact, here’s a video that I filmed last year that illustrates my point. I have no idea how that fight started but then again, it’s not far fetched to assume that some of the Thai people involved even know why they’re attacking either – just following along.

So there I was with this drunk idiot standing in front of me trying to start a fight. I should mention that he was about a foot shorter than me, 50 pounds lighter than me and he most likely doesn’t train (I don’t know many aggressive, coke-addicted, alcoholic Muay Thai fighters). Not to mention the fact that I’ve been to a lot of gyms on the island and I’ve never seen this guy at any of them. Also, most Thai fighters that you’ll come across are pretty respectful and don’t walk around picking random fights to prove their self worth – they can leave all that in the ring.

Anyway, I ended up trying to talk the situation down once again and walked away. He got back on his bike and followed me once again. At this point, I figured that he wasn’t going to leave me alone so I walked into a busy “family mart” and told everyone the situation. I figured that it would be a good idea to make people aware that I was not the one instigating the fight in hopes that it would reduce the chances of everyone jumping me based on the sight of a big foreigner beating up a little Thai (without knowing the story behind it).

At this point (while I was in the store), he was sitting on his motorbike outside and giving me the finger through the window. I walked outside and once again, he starts talking more shit and I once again ignore it and walk away. I walked about 50 meters to the next family mart (they’re everywhere here) and every night, there’s a guy there that sells BBQ kabobs. The place is right in front of my building so I talk to the guy quite often. Anyway, I just shook his hand (didn’t mention the situation) at all, went into family mart (bought some milk) and when I came out, the aggressive Thai dude was gone.

Why he left? I’m not really sure. Perhaps he just got bored and moved on to look for someone else to harass or it might have had something to do with the fact that he saw that I knew at least once person in the area. Either way, the whole situation was fucked up. I’ve been here for a long time and never once have I felt “alone”, but last night was different.

Aside from walking away, I really didn’t have any other options. I could have fought him and got jumped by a bunch of motorbike taxi drivers in the area, or on the slim chance that I wouldn’t have gotten jumped, the police may have gotten involved and something tells me that they wouldn’t take my side (the foreigners side) unless a bribe was involved.

I certainly question the integrity of the Thai police, especially when I hear about news stories like this..

Here are the highlights to illustrate my point..

“Norwegian Simen Knudsen was robbed and stabbed to death recently on a quiet stretch of road near Kata viewpoint. The three boys arrested for the killing were released shortly after, undermining a high-profile police investigation.

Just this week, an Australian woman riding with her friend was pushed off her motorbike and robbed at gunpoint in the same area.

Cases like this are happening more frequently. Every time, after a week of the police being certain of their investigations bearing fruit, nothing happens and the attacks are quietly forgotten.”

Now don’t get me wrong here. I still love Thailand and its people. Incidents like this are extremely rare here and it’s not like this will change my overall perception of this awesome country. I suppose if Thai people judged all us foreigners on the actions of a few, then we’d all be sloppy, drunk, loud, obnoxious sex tourists in their eyes – which clearly isn’t the case. And likewise, I can’t pass judgement based on the behaviour of the drunk guy last night either.

Anyway, back to the fights from last night.. Check this one out, it’s what Muay Thai is all about – patience and amazing technique..

Although I had a great workout today venting my anger from last night on the heavy bag, it’s been somewhat of an “off” week. I had to get an impacted wisdom tooth removed on Sunday and since then, I’ve been on the diary queen diet. Nothing but ice cream, noodle soup and bananas. I graduated to spaghetti today so that’s a good sign. But needless to say, in my malnourished state, I haven’t had much energy lately. I went in a few times this week and just lifted weights and threw a few punches but that‘s the extent of it.

I also have to do another one of those whack visa runs in a couple days but after that, it’s back to training hard. It’s hard to believe that I’ve already been here for 7 months. I don’t have much time left so I’ll be moving on rather soon – but not before I pay a visit and review the other camps in Phuket of course. I’m not really sure where my next stop is going to be but as always, I’ll keep you updated..