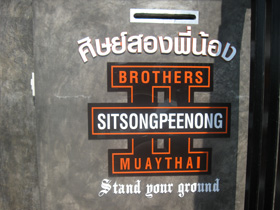 So a few weeks ago, I was watching Muay Thai videos online and I came across a fight between Kem “Sitsongpeenong” and the most recent K1 Max champion; Giorgio Petrosyan. I noticed that Kem (formally known as Kem Fairtex) changed his last name (the gym he represents) so I decided to do a little Google search and find out what this “Sitsongpeenong” gym was all about.

I found their website and from the looks of things, it seemed like a cool place to train. So, since I was in Bangkok, I decided to stop in for a session and check the place out. The gym is located about half an hour or so from the center of the city but with transportation in Bangkok being so inexpensive, you can jump into a metered taxi and get there for around 200 baht or so (which is around 6 dollars).

When I arrived, I was immediately impressed with the facility. This is a major Muay Thai complex and you can tell that a lot of money has been put into the place. I was greeted at the front by the owner and after a brief introduction, he guided me up to the gym area which is on the second floor. The owner, by the way, is half-Thai and half Australian – which is great because he’s fluent in both languages so if you have any trouble finding the place, just pass the phone to him and let him give the taxi driver directions (that’s what I did anyway). It’s a relatively new gym (about 9 months old) so most people don’t know where it is.

Anyway, in the gym area, there’s 2 full sized “top king” rings, a matted area with bags and an area in the corner with some strength training equipment. Here’s a quick video tour that I took of the training area..

As you can see, it’s a nice facility (much like Tiger or Fairtex) but the business model at Sitsongpeenong isn’t based around catering to the average foreigner who’s looking for a “fitness holiday”. Rather, it seemed like their main priority is on producing fighters (most of which are young Thai’s). Out of everyone in the entire gym, only 1 guy who was living/training there was NOT booked for a fight (and even he has had 7 MMA fights under his belt back in the states).

And speaking of the fighters they’re producing, here’s some footage I got of an up and coming “superstar” (as I’ve been told) doing some clinch work in preparation for an upcoming fight at Lumpinee. He’s in the red shorts and as you can see by the older trainer; stick in hand, and whipping them when they slow their pace, they’re taking the fight seriously – most likely because they’re planning on laying down a big bet on him next week.

It seems as though those kids never get tired. Unfortunately, the same can’t be said for myself. The gym was nice, the trainers were friendly and knowledgeable but my workout sucked. I have bad asthma to begin with and even in Phuket, I’m usually hovered over gasping for air at around the 2-3 minute mark of the first round but for some reason, the Bangkok air made it a lot worse then it normally is. Rather than lasting 2-3 minutes, I could only pull off 15-20 second intervals before I’d have to stop and regroup.

That’s the main reason why I don’t have more reviews of the Bangkok gyms on here. I hate training there because it worsens an already shitty condition that I have. That being said, nobody else seemed to be negatively effected by the air quality as they were all doing 4 minute rounds on the pads with only 30 second rest intervals. I know because they had a timer in between the two rings (you can see it in the videos).

I’m not a big fan of Bangkok in general but if I was to train at one of the gyms there, I would definitely station myself out of Sitsongpeenong for a while. If you compete back at home or want to compete here in Thailand and are looking for a training environment free of distractions, then Sitsongpeenong might be worth checking out.

However, as mentioned above, if you’re looking to relax, chill at the beach, pick up girls and have somewhat of a “training holiday”, then Sitsongpeenong most likely isn’t the best place. There’s not much to do in the area and as the owner himself said, you “just wouldn’t be happy there” (unless you’re there strictly for the training that is).