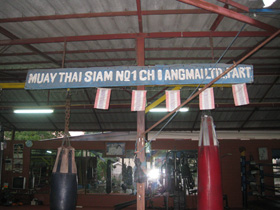 While in Chiang Mai, I checked out a couple of the gyms – Siam No 1 being one of them. Prior to arriving, I had high expectations for this gym because most of the trainers at my favorite camp (even my own trainer) were brought up at Siam. Not only that, but one of my buddies had been training there for a few months at the start of his trip (as he’s a student at the branch in Toronto) and he had nothing but good things to say about the place.

The gym is located in Sankampaeng – which I guess is an outskirt of Chiang Mai – and it takes about half an hour via motorbike to get there from the center of the city. I imagine it would have been tough to find had we not been with someone who had previously trained there.

When we arrived at the gym, I was surprised at how empty the place was. Siam No 1 is a pretty historical gym and I was under the impression that a lot champions have been brought up there (as indicated by the stack of trophies). But on this day, however, there was a couple trainers sitting ringside and a few little girls shadowboxing – and even they were just sort of playing around rather than undergoing a serious training session.

I wrapped my hands and did some skipping/shadowboxing to start things off and by the time I finished my warm up, a couple other people (guy from Holland and a girl from Germany) had returned from their afternoon run. So, in addition to myself and my two friends, there was only two other foreigners training there.

Before I go any further, when my friend was describing his experience here, he said everything was great (he even fought for the gym), but he said that during one of his pre-fight workouts, some random old guy just showed up and trained him. He saw him that one time and never again.

Well, apparently that “random old guy” was there again that day and he was the one who was training us. He told me he has been doing Muay Thai for 35 years, that he was a champion of the North and a Lumpinee champion as well. Whether that’s true or not, I’m not sure. You just never know in Thailand. I’ve had taxi drivers claim to be Lumpinee champions before (I’ve even had one guy prove it by showing me photos of himself in the ring with the belt via his cell phone).

Anyway, Lumpinee champion or not, this guy had a strange method of teaching. Sometimes you vibe with a trainer; sometimes you don’t. This time I didn’t. Actually, none of us did. He trained all 3 of us and we all had the same “is this guy serious?” expression on our faces. He would tell us to bob our heads up and down and throw knees without putting any sort of guard up – basically welcoming a counter-strike to the face.

That’s the downside to only spending a limited time at some of these gyms. I can hardly judge Siam No 1 as a whole based on a single pad-work session with a wacky trainer. Sure, I wasn’t impressed with the training I got that day, but apparently that trainer isn’t there on a regular basis. My friend Ian swears by Kru Pon and Kru Doe’s training (as does the guy who was training there from Germany).

This is one of those instances where I can’t recommend a gym (based on my personal experience) but I wouldn’t discourage you from going ether (based on recommendations by people that I trust). If you happen to be in Chiang Mai, then check it out and form your own opinion. Maybe YOU can let ME know how it went for you there – just don’t train with that old dude. Here’s a video tour that I took of the place..