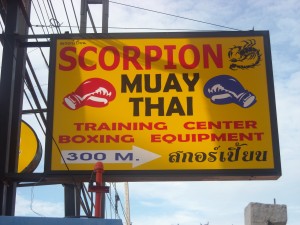 When I first arrived in Pattaya, Scorpion Muay Thai gym was the first camp that I visited. As I mentioned in an earlier entry, it was tough to find at first but now that I know my way around, it’s actually very convenient to get to since it’s on the baht bus route – which is a major reason why I’ve been going everyday.

Further adding to the convenience factor is the fact that Scorpion Muay Thai doesn’t have “set” training times. Rather, you can just show up (anytime between operating hours) when you want to train. This is Thailand and a famous motto here is “Sabai Sabai” – which basically means relax and take it easy. Shit happens – it’s easy to get side tracked here and I like the fact that I don’t have to rush to training.

Another thing that I like about Scorpion Muay Thai, aside from the convenience, is the fact that it’s not overcrowded. When I’m doing my pad-work, I don’t feel as though the trainer is rushing through the rounds and trying to get as many students in and out as possible. I trained at one gym here in Pattaya and I got 2 rounds of pad-work. In between the 2nd and 3rd round, the trainer called the next student into the ring and I was left standing there (with my gloves still on) wondering what the hell was going on. Needless to say, I never went back.

At Scorpion Muay Thai, I get a minimum of 5 rounds of pad-work. Three of those rounds focus on Muay Thai techniques (kicks, knees, elbows) while the other 2 rounds focus strictly on boxing with the focus mitts. When I first arrived, I was talking to Rosalie (the owner/professional fighter) and she said that as long as you still have “power”, you can continue on beyond the 5th round if you’d like. Five rounds is enough for me since I’m still trying to work on my cardio but if your conditioning rivals the likes of Urijah Faber or Sean Sherk – you can do all the rounds that you need to do. Here’s some footage I took of 2 of the trainers working with 1 of the students (keep in mind, they don’t have to do that).

Since Scorpion Muay Thai doesn’t have “set” training times, the workouts differ somewhat from a lot of the other camps. You’ll notice that when you look at other Muay Thai camp websites, they have a typical day of training laid out for you to view. The training usually involves a run, skipping, shadowboxing, heavy bag work and then simulated rounds with the trainer.

Well, at Scorpion, if you’re not in the ring doing pad-work, you’re sort of left to do your own thing. I don’t mind this at all because I can skip, stretch, shadowbox and hit the heavy bag on my own. I just throw on my iPod and go through the motions. My routine at Scorpion Muay Thai is currently as follows..

Skipping (3-5 rounds)
Shadow Boxing (2-3 rounds)
Boxing on the Heavy Bag (3 rounds) – although cut short if I get called into the ring –
Stretching
Simulated Pad-work with the trainer (5 rounds)
And as of late.. I’ll finish up with about 2-3 rounds of sparring.

I personally enjoy the freedom of not having to run 10K everyday and do countless push-ups when I’m still sore from my workout at the gym the night before. And it’s not because I’m some fatass that can’t handle the workout. It’s because, honestly – I believe those training methodologies are outdated.

Back at home, I earned a living via a day job as a personal trainer (in addition to working at a nightclub), so I enjoy designing my own workout programs. The typical workout I outlined above consists of between 15-24 rounds (all of which are done at varied intensities). 24 rounds of cardio – I’d say that’s quite enough to prepare yourself for a 5 round Muay Thai/MMA fight. So rather than run an additional 10K, I find it to be more beneficial to go to a traditional gym and perform “fight functional” exercises to develop power.

By “fight functional”, I don’t mean bicep curls and leg extensions either. I’m talking about compound, multi joint exercises such as dead-lifts and the bench press. And of course, as any fighter will tell you, you need to develop the rotary strength of the core – and that’s just not something that regular sit ups accomplish. I usually implement some of the exercises from a manual I got a while ago – check it out if you want. Unfortunately, it’s not free though.

Anyway, back to the Scorpion Muay Thai gym. Overall, it’s pretty good. Nice facility, friendly atmosphere, it’s not overcrowded and most importantly – the trainers know what they’re doing. In addition to all that, it’s actually one of the cheapest Muay Thai camps that I’ve seen. A single session is 250 baht (which is on par with most of the other camps around here) and if you pay monthly, you can get once-daily training for 3800 baht. If you want to do two-a-days, it’ll cost you 7300 baht. Most of the camps only offer the two-a-day price regardless of how often you train.

Now for the “Fon” update

Well, she called me a few days and asked if she could come over. I don’t know why, but I said she could. Actually, I do know why – when a hot girl calls you and wants to come over at 3am, it’s tough to say no (crazy or not). Anyway, when she showed up, I got a weird vibe from her. Before I let her in, I talked to her for a bit to feel things out and I came to the conclusion that she was obviously drunk or high.

I told her that I changed my mind and that she had to bounce because I didn’t feel comfortable with her staying at my apartment while she was like that. She refused to leave. Since she wouldn’t leave, I figured I’d just walk back upstairs to my room and just lock the door. When I tried to do so, she kept blocking off my path so I couldn’t get by.

I really didn’t what to do at this point so I just stood and tried to explain to her, over and over again, why she couldn’t come up. Nothing was really getting through to her and I honestly just wanted to go to bed at this point so I literally had to grab her and try to escort her out the door. In the process of doing so, she flipped out and started slapping me..

Anyway, I got her out, locked the door and luckily – I haven’t seen her since. I told her best friend via msn that I went to Bangkok. I even went to an internet cafe and got her on webcam so the Bangkok story was a little more believable (I have WIFI in my room and usually use my laptop).