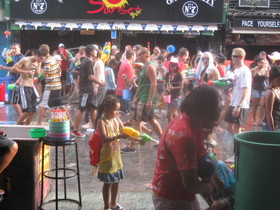 Up until this past Monday, I had only heard of the day where everyone throws back booze and has a country-wide water fight. It sounded pretty wild and after experiencing it first hand, I have to admit – it was very, very fun!

I was woken up by the sounds of a Timberland beat blasting out of the two giant speakers they had set up here at the guesthouse where I’m staying. I obviously knew what Songkran was about but having just woke up and put on a fresh dry outfit, I was content to just watch the happenings from my balcony for a while.

Well, apparently one of the waitresses in the in the guesthouse restaurant saw me up there because within minutes of stepping outside my room, she ran up and hit me with a bucket of freezing cold water. From that point on, I obviously didn’t care about getting wet anymore so I just grabbed a water gun, a couple bottles of water and joined the action.

Throughout the day, I saw so many things that I would never see in Canada (and most places for that matter). For starters, along beach road I saw a few on duty Thai police officers drenched with water and covered with white powder. They had their guns wrapped up in plastic and of course, they were getting the worst of it because let’s be honest – who doesn’t want to throw a big bucket of cold water at an on-duty police officer and get away with it like they can during Songkran?

I also saw some things that were flat out reckless. Here in Thailand, most people drive motorbikes. During Songkran, a lot of people get really drunk – not unlike we do on December 31st. Drinking and driving is obviously a major problem (perhaps because the police officers are celebrating themselves and getting drenched and powdered instead of patrolling the streets) but not only that, there’s actually groups of people that stand at the side of the road and when a motorbike drives by, they’ll pour a bucket of water on them – and oftentimes they aim for the face.

I actually saw someone pour a bucket of water on a passing motorcyclist and the guy on the bike stopped, wiped his eyes, turned his motorbike around and actually ran over the guys foot. Obviously the guys reaction wasn’t justified – especially during a holiday where the tradition is to pour buckets of water on each other – but I can only imagine how annoying it must be to be driving around and regardless of where you go, you constantly have people tossing water in your eyes.

I actually got an email notification from a Thailand forum this morning and apparently the death toll for the week is at 373, the injury toll is at 4,332 and all the deaths and injuries are a result of 3,977 total road accidents. They actually call Songkran the “deadliest 7 days” (it’s only 1 day here in Phuket) so I’m assuming it’s like this every year.

But like I mentioned above, it’s extremely fun – just stay off the motorbikes and you’ll be alright. I took a few videos of the scene in the streets. Here they are..

I would have taken more but it seemed like every time I took out my camera – which I don’t think is waterproof – I had someone spraying me with a water gun.

My “home” gym right now is Patong boxing gym but I’ve been picking odd days and trying out some new ones. I went to the Suwit Muay Thai gym a couple days ago and I’ll have a review up on it soon. I’m also going to check out Sinbi and Rawai this week and post reviews for those as well..