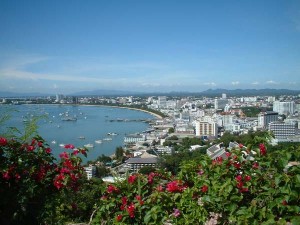 Pattaya Thailand; this is one place that every man should experience at least once in their lifetime. It’s hard to even believe that a place like this actually exists. I’ve never seen so many beautiful women in such a concentrated area anywhere else and I spent 3 months living in Las Vegas. Vegas was cool, but it was tough to meet women when me and my buddy would be talking to a couple good looking ladies on LV Blvd. and high rollers would drive up and holler at the girls from the window of their Bentley GT. That’s a tough decision for the girls – hop into the Bentley with the millionaires or stick around and kick it with the guys on foot who would rather sit at the 10 cent slot machines and pretend to play in order to get a few free rum and cokes than stay in the bar and pay 9 bucks a drink. Although the first option (our approach) is much more financially sufficient, it doesn’t exactly impress the ladies in Vegas.

Aside from the seemingly thousands of insanely beautiful women, Pattaya also offers great training. Sityodtong was awesome, as was Scorpion. I’ve spent the last month training exclusively at Scorpion as it offers a laid back, un-crowded environment with great trainers who are eager to help. Both camps are situated away from the nightlife and both camps are surrounded by affordable accommodations. Not only are the nearby rooms affordable, but so is the training itself. A single session at both camps will run you a mere 250 baht (about 7 dollars). Just think, how much would a personal training session with a former champion Muay Thai fighter run you in your home country? I actually just found a new, well decorated room within 100 meters of Scorpion gym atop a convenience store with a large fridge, queen size bed, private washroom and air conditioning for 5000 baht per month (5000 baht is about 150US dollars).

I will certainly be keeping that room in mind for the future. Both the room and training costs will come in at less than 9000 baht per month. I’ve yet to see a more affordable combination that throughout both my time in Thailand and the time I’ve spent researching countless Muay Thai camps online. For someone like myself who a) doesn’t want to go home to Canada and b) wants to develop phenomenal stand-up skills, it’s important that I make things affordable so I’m able to stay as long as possible.

However, tomorrow at 12:45pm I’ll be boarding a plane to Phuket where I’ll be living and training at the ever-so-popular Tiger Muay Thai gym. I get more questions about Tiger Muay Thai than I do about any other camp in Thailand so the interest is certainly there. I’m curious myself to see how the training at Tiger will compare to the training I’ve received so far at some of the other Muay Thai camps I’ve visited.

In my last entry, I mentioned a “twist”. Well, it’s possible that the “twist” has made me a marked man. Well, that’s a little overdramatic but I’ll explain. If you read the “trouble in paradise” entry, you’re then aware that I was living with a showgirl for a while. I lent her money, we had a falling out, haven’t gotten the money back yet etc. In my write up, I told a story of how she went nuts, started throwing electronics, sat in an empty bathtub for a while and there was also mention of drug usage.

About 85% of my readership comes from North America so it’s highly unlikely that people in Pattaya even know this site exists as I do absolutely no advertising here. Well, a local news website picked up on my Thai girl adventures and started profiling some of my entries. That’s all well and good as every bit of extra traffic helps the site grow. However, the latest entry, which can be viewed here, runs photos of her, mentions her name, mentions my name, and at one point, it even labels her as a “known yaba addict”.

Thailand is an extremely anti-drug country and it’s not entirely uncommon for “known yaba addicts” to be executed by the police. As you’d expect, with such harsh penalties for drug usage comes harsh consequences for those who draw attention to people using drugs. In all fairness, the girl does not use yaba (that I know about) and I met up with the author of the site in an effort to clear that up.

We exchanged text messages and met up at one of the more popular bars here in Pattaya for a drink (I had orange juice of course). Turns out that he was a really cool guy and he understood that the drug mention wasn’t critical to the story so he agreed to take it out. On a side note, it was pretty cool hanging out with a Thailand “local” (he’s originally from Jersey) as he was able to immediately pinpoint the best deals across town on a given night. It happened to be a Friday so he showed me a place with 50 baht beers ($1.75) and with every drink purchase, they gave you a free slice of pizza. Not that I eat much pizza, or even drink much beer for that matter (training), but that’s an incredible deal. I could never see an establishment in Canada offering prices like that. 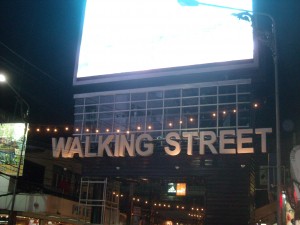 Walking street is an area situated along the beach that gets blocked off at night so cars can’t drive through. Hence the name, walking street. It’s basically a concentrated area that’s jam-packed with all sorts of go-go bars, nightclubs, shops and restaurants. It’s also possibly the most fun street I’ve ever spent time on. The gym I train at (traditional gym) is situated just off walking street so I see all sorts of crazy things being done by all sorts of crazy people. Here are just a few random videos/photos that I’ve taken of some of the scenes..