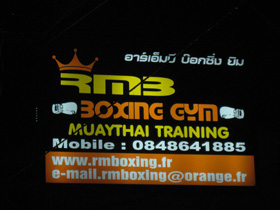 I needed to get at least a few workouts in during our classy week in Pattaya and I wanted to try something new. I had already visited Fairtex, Scorpion and Sityodtong during my last trip so I decided to check out the RMB gym since I had heard good things.

It was a little tough to find since the website says that it’s located on soi 7 and when we went there, we found nothing but bars and bargirls. After asking around a bit, we realized that we were on the “wrong” soi 7 so we hopped onto a baht bus and the driver brought us directly to the gym, which as it turns out, is located around the big C.

Anyway, we walked in, paid the 300 baht for the day (it’s 4000 baht per month) and started to warm up by skipping and hitting the bags. I was eventually called into the ring by one of the trainers and he said his name was “Ekapol”.

I didn’t recognize him at the time, but I was familiar with the name. “Juke Ekapol” used to work at Scorpion gym and he has an insane record of 317 wins and only 19 losses. He’s a former Lumpinee stadium champion as well – at least that’s what it says here anyway.

Aside from the fact that I’m out of shape and got tired so quickly, the workout itself was great. I would have been given a full 5 rounds of padwork (if I could handle it) and I would have had the option to either spar or do clinching after that as well.

I trained at RMB twice and got a different trainer each time – both of which were awesome pad holders. Here’s a short video of me hitting the pads on my second visit there..

As you can probably tell, I’m out of shape but that’s because I wasn’t training the past 6 months while I was back in Canada. So, I’ll consider that video to be “starting point documentation” so I can monitor my progress. I’ll put up a more detailed review of the RMB gym once I spend a little more time there and get a better feel for the place. So far so good though.