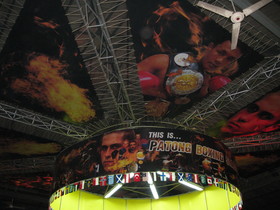 I know, I know – it’s been a long time between entries. It’s been getting hotter here every day so I changed to a room with air conditioning but unfortunately, the internet connection here sucks. It takes me a couple hours to upload a minute long video to youtube and that’s assuming I don’t lose connection in the process.

I’ve also been working on some other projects because well, I don’t want to have to come home. I think I’ll go back to Canada for a visit, but I’d certainly like to have the option of staying or at least the option of coming right back within a couple months of being back at home.

Muay Thai has become a part of my lifestyle now. I can’t even imagine not doing it, or even going back to the Western style classes where random, inexperienced students are your pad-holders.

It certainly doesn’t take much money to live here – and live well – but the whole process has been taking longer than I expected. But hey, if what I’m doing ends up working, I’ll write out a “make money online” guide and just give it to you guys for free so you can just bounce to other countries to train as well.

So as for my training, I’m still at it 6 days a week at Patong Boxing Gym. I’ve spent a lot longer than expected here but that’s just because I like it so much. The location is perfect, the trainers are very technical, you get plenty of pad-work and everyone there is just so friendly. It’s actually a big family – literally. I’ll throw up an official review of the place soon.

Last night I went to another fight night at the stadium – which is about a 2 minute walk from my apartment. Two of the trainers and one student from the gym were fighting and they all won actually. One of my trainers was fighting and I was a little nervous for him since he never even bothered to train.

For the past two weeks leading up to the fight, I’d show up for training and before I started my pad-work, I’d ask him if he trained himself and his response was always the same – he just kinda smiled, laughed and said “no, no training”.

Anyway, to my surprise – and perhaps even to his surprise – he ended up knocking his opponent out in the first round. The guy threw a leg kick, my trainer caught it and just smoked him with a right hook. It was pretty sweet actually. I guess when you’ve been training and fighting your whole life, it comes naturally and you don’t have to train as much.

The whole fight card was pretty good. Lots of knockouts. There was a Thai vs. Thai fight and one of them got his knee blown out from a low kick. I was sitting up in the stands and even from where I was sitting, I could feel the power of the kicks. It’s hard to believe they were only 17 years old.

In another fight, one Thai guy backed the other into the corner and then just brutalized him with jumping elbow spikes to the top of his head. You never see that in MMA competition simply because well, it’s too dangerous and I’m pretty sure downward elbow strikes are actually banned.

Needless to say, the guy that was on the receiving end of the strikes dropped after the third one and just laid there motionless for a couple minutes – I thought they were going to have to bring out the stretcher. Luckily he was alright though and walked out of the ring on his own.

In my last entry – which was actually about a month ago (time flies) – I talked about how some drunk little Thai dude was following me on his motorbike trying to start a fight. Well, I haven’t seen him again since then and if he’s seen me, I doubt he’d even remember considering how hammered he was.

I did however run into a couple “ladyboys” the other night as I was walking back to my room on a deserted stretch of road behind the Jungceylon shopping center. I saw them ahead, walking towards me and I did what any heterosexual man would do when he sees two “tranny” prostitutes walking towards him – I walked to the other side of the road and hoped they wouldn’t follow.

Well, unfortunately they did. And so they approached my despite my obvious disgust. One of them – who looked like a fucking monster by the way – said “let me see” and tried to reach into my right pocket. It was either reaching for my money or something else – either way, it was getting access to either!

I just grabbed its wrist, twisted it a bit and said ‘MAI OW” – which means “no” in Thai. For some reason – whether you’re trying to shrug off pushy street vendors or fighting off trannies on dark stretches of road – speaking even the slightest bit of Thai helps a lot. I think it shows that you’ve been around long enough to be tuned into the local hustles – in this case, it was the lady boy pick-pocking attempts.

Anyway, when I grabbed and twisted its wrist, both of them kind of let out a gender-confused scream – or a yelp. I really don’t know how to describe it. Ladyboys obviously have to make an effort to disguise their manly voices but when it comes to natural reactions, they can’t really do it. Tickle them or twist their wrist when they try to jack you – they’ll sound like a dude either way.

And as for how I knew exactly what they were trying to do. Well, I came here last year and while I was here, I just randomly ran into a guy I went to school with – both elementary and high school. I was sitting at the bar (drinking water of course) and he just walked by. I had to do a double take but to my surprise, it was actually him. What are the odds, huh?

Anyway, later on that night we were walking down the street and every time we walked by some ladyboys, I’d be like “he likes you” just to mess with him. They would then approach and try to molest him while I just laughed it up – and took some pictures of course.

I had to dig this from facebook but look closely, the ladyboy is jacking his wallet. Neither of us noticed at the time but luckily he noticed his wallet missing about a minute later, freaked out and ran after them. When the ladyboys saw him coming, they just kind of tossed the wallet and scattered away.

So I’ve been at the Patong gym for quite a while now simply because, well .. I haven’t really had a reason to leave. It’s just so convenient and the training is great. But I know some of you are wondering about Sinbi and Rawai so I’ll be sure to check them out this week and throw up some reviews.