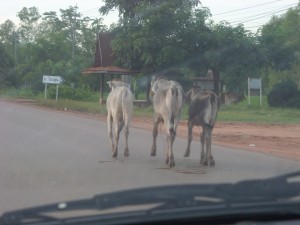 My 26th birthday was on the 5th of this month so I obviously went out to celebrate. I’m not going to sit here and claim that I went to the bowling alley or out for ice cream either. Fuck that! I was celebrating my birthday in Pattaya, Thailand so I went right to the gogo bars. For those of you who are unfamiliar with Pattaya, I’ll tell you this – this place is known as a “Disneyland for adults” and askmen.com has it ranked as the top “sin city” in the entire world. I train hard and don’t let the temptation get to me but on my birthday – I wanted to let loose.

Throughout the night, I checked out about 15 of the seemingly countless of gogo bars on walking street. My final destination was a bar called “new living dolls showcase”. The girls in this place were all incredibly beautiful but there was one girl specifically who caught my eye. Not just because she was beautiful, but because I actually recognized her from a video on youtube I had seen about 3 months ago and I’m not going to lie – pretty much everyday since I initially viewed it. As a matter of fact, I used to send the video link to my friends while I was in Canada to a) make them jealous that I was going and b) encourage them to book a damn ticket and join me. Here’s the video ..

Anyway, she sat down next to me but started talking to the dude on her right hand side. That went on for about 10 minutes or so but when he got up and walked off (I figured to go to the washroom) I took advantage of the opening to start a conversation. “Hey, how are you?” I said (I’m not very creative when it comes to pick up lines). In true Thailand showgirl fashion, she went right for the wallet – “I’m ok, but I’d be better if you bought me a shot of tequila” she replied. The girls here get a percentage of all the “lady drinks” they sell. I bought the tequila to keep the conversation rolling…

After talking to her for about 5 minutes, the guy who she had been previously talking too walked back but she sort of brushed him off. Awesome! I thought. I drank with her for about another hour or so then we went over to a couple after-hour nightclubs. Unlike a lot of the other girls I’ve met, she actually speaks very good English but not only that, she has a good sense of humour and will joke around with you as well.

Since then, we’ve chilled quite a bit and since she had to come home for a few days to take her dad to the hospital, she invited me to come along since it was an 8 hour drive and she didn’t want to be bored. I took her up on the offer simply because I’m here for an experience, so coming to a place where no other foreigners come too is exactly that – an experience. I seem to get a lot of attention here. As I was driving to her house, we were tailing a mini bus of young Thai army trainees and they got excited and started waving and pointing while saying “farang farang”! The term farang, as mentioned on other entries, is just a non-derogatory term for a foreigner here.

So right now, as I’m typing this, I’m at an internet café that’s located about an hour from “Khan Kaen”. This is the real Thailand (village style). As a matter of fact, the majority of her neighbours built their houses themselves with wood they collected from up in the mountains. The toilets don’t flush (you have to manually pour in a bucket of water). Most people don’t have showers (again, they just use a bucket of water) and her neighbours have a bunch of live chickens in their backyard and when it’s time to eat, I guess they just go out there, grab one, slit its throat and boil it up. It’s definitely been a culture shock for me.

I’ll be taking some plenty of photos and videos while I’m here (I’ve got some good ones already) and I’ll be uploading them for you guys once I get access to a faster internet connection. I should be in Bangkok within the next few days so I should be able to throw up another update then..

Oh wow, just as I was typing this .. My friends sister showed up with 2 chicken/rice meals for me. When you hear people say that they fall in love with “the people” of Thailand – that’s the sort of thing they’re talking about..