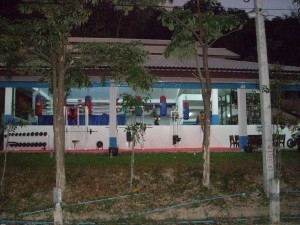 So after about 2 months of living and training at Tiger Muay Thai, I decided to switch things up and move on to a new camp. This is my second trip to Thailand and during my first trip, I trained at a few different camps – one of which stood out from the others and surprisingly, it was Patong Boxing Gym. Of course, during my first trip, I didn’t train at that many camps so I didn’t have much to compare it too.

What I liked about it was the fact that I could show up anytime during operating hours and that the instructor I was paired up with was really technical – which is what I needed at the time since I was a beginner. Before I had found Patong Boxing Gym, I was training at an all-Thai gym in the hills called “SingPatong”.

While SingPatong had a lot of awesome fighters and a real Muay Thai atmosphere, the instructors I was working with half the time didn’t really know how to relate the techniques to a beginner such as myself. Now that I’m a little more advanced, I’ll probably head back to SingPatong for a few sessions but in the meantime, I’m training at a new “Patong Boxing Gym” that just opened up in the hills – about 5 minutes from where SingPatong is.

The owner still has her original gym which is located near the beach surrounded by “happy ending” massage parlours which she is using for her beginner students. For the more advanced students, she’s sending them up to the new camp which just opened about a month ago.

It’s actually a lot nicer than I thought it was going to be. There’s about 15 rooms onsite – some of which have a sick view of the ocean. At the moment, there’s actually more trainers than students and it’s all one-on-one training. I’ll be doing padwork with one trainer and in between rounds, I’ll have another trainer pouring water into my mouth and giving me a massage.

It’s also in a nice, quiet location with a great running path. Check it out ..

I moved into a new apartment which I ended up getting a great deal on. When I first got here and went looking around for rooms, everybody would jack up the price since I’m white and I guess they think foreigners don’t know any better. Well, since I’m staying here for so long, I’m the guy you’d see arguing with the cleaners about getting the jacked up foreigner rate on my laundry. So, getting charged 17,000 baht for a basic room didn’t fly with me either.

I ended up randomly meeting a friend at an internet café that I had met the year before and she walked around with me for a bit and found me a nice big room for 5000 baht a month. See, there really is a “Thai price” on things – which really pisses me off actually. I can only imagine the drama that would ensue if minorities in western societies were being charged 2-3 times the regular cost of things. 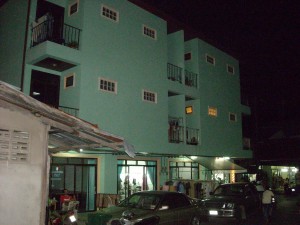 Anyway, as it turns out, I’m pretty sure I’m the only foreigner living in this building. It’s all Thai people and from what I’ve seen, it’s all Thai girls – hot ones too, like 3-4 per room. So needless to say, I’m liking my new living quarters. It’s certainly a nice change of pace to living at a Muay Thai camp with about 100 other dudes.

The building – which is only a couple floors – is right near the boxing stadium and the location is perfect. There’s convenient stores, Thai food stands and fruit markets all over the place. When it’s time to go to training, I just run to the gym – which takes me about half an hour. It’s all uphill too so it’s just what I need since surprisingly, my cardio still sucks. You’d think that after training 6 days a week for 5 months straight, eating right and having only 1 beer in the last 3 months, my cardio would be amazing but apparently not. It’s pretty frustrating actually.

Anyway, on another note, Christmas just past and it was a little weird being away from home. I didn’t really do much. I just trained during the day and went for a walk at night to check out the scene. It was pretty wild actually. It was just a giant party with fireworks, plenty of alcohol and plenty of guys looking to get laid.

To be honest, Christmas for me has always been about family and church, not booze and prostitutes (lol), so I was on my best behaviour. For some reason, I figured it’d be bad karma or something if I was to give into temptation so I ended up just coming back to my room. I ended up taking a video of the scene though for you guys to see. The video quality sucks – I think it’s time for a new camera. As you can tell, I was feelin’ the girl by the dancing by the Bacardi sign, check it out..

Anyway guys, thanks for following along up to this point (still lots to go) and all the best in 2009.