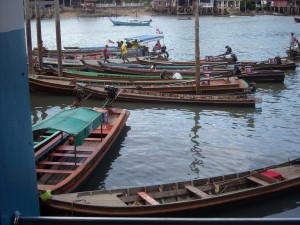 So, for the people that want to stay in Thailand long term, oftentimes they have to sacrifice a day of their lives in order to gain another twenty-nine. Yesterday I spent a combined 10 hours in a van and another half hour or so on a little boat to cross over the border of Burma. My initial visa that was issued to me from the Thai embassy in Ottawa, Canada was set to expire today so I was left with minimal options.

I had originally attempted to obtain a “non-immigrant type ED” visa as I had supplied all the necessary documentation. Turns out, I was given a single entry “type O” visa which was valid only for 3 months. I tried taking all the documentation to the immigration office here in order to get an extension but the immigration officer I was matched up with didn’t consider “Muay Thai” to be education.

His statement was ironic considering that dozens of guests at this very camp have “ED” visas for studying Muay Thai. However, the officer (without even looking through my documentation) simply said “Muay Thai? No! Cannot!”. He then walked to a nearby cabinet, pulled out a handful of paperwork from one of the drawers and handed it to me. After having the papers translated by a Thai friend, it turns out that the papers he handed me were completely irrelevant to the education visa I was applying for as they were for those wishing to work in Thailand.

Just bad luck I suppose as standing there and arguing with the immigration officer wouldn’t have done me any good. My solution was to leave Thailand and simply re-enter for a 1 month extension. Thailand allows you to do this 3 times within a 6 month period. However, next month when I leave Thailand I will likely be going to the Thai embassy in Malaysia to apply for the proper education visa. Even if I’m unable to get a “non-immigrant type ED”, I’ll just get a 60 day tourist visa which can then be extended from within Thailand for another 30 days – giving you 3 months in total. Through a combination of tourist visas and 30 day stamps, you can pretty much live in Thailand providing you time everything right (although clearly, I’m not visa expert so don’t quote me on that). If you’re thinking of coming to Thailand, the best source of visa information can be found at ThaiVisa.com

Anyway, when I finally arrived at the Thailand departure port, the only thing I could focus on was the awful smell. Most of the people in line were holding their shirts over their mouth and noses. Some Thai guy then took our passports, which at first made me a little paranoid. One of the fellow visa-runners had to re-assure me that it was a normal procedure. We then got onto a Thai-style boat and headed toward Burma. This was actually the highlight of the day as the scenery was pretty cool.

When we arrived in Myanmar (Burma), I didn’t really know what to expect. The extent of my Burma education was from the Seinfeld episode where Elain’s boss (Mr. Peterman) randomly goes there and she has to go see him to get his approval on some of the company expenses, at which point, Mr. Peterman questions her about the “Urban Sombrero” on the cover of his magazine. Yup, I certainly live a sheltered life in Canada.

As I’m writing this, I’m simultaneously watching Myanmar-related videos on Youtube. I’m sure most of you are more up to date on world issues and current events than I am so you likely already know about the fucked up problems that the villagers of Myanmar have to deal with. And just in case you didn’t already know about Myanmar’s corrupt military government, check out these videos..

From the time our boat docked to the time we were back on it and headed back to Thailand, not more than 15 minutes had elapsed. That was the extent of my stay in Myanmar and that was quite enough. One of the border “hustlers” – since they just post up and try to sell all kinds of stuff to the stamp-runners – called me “Fred Durst” from Limp Bizkit on account of how I was dressed and then started talking to me about his favourite rappers. It’s interesting to see how widespread American music really is. I wonder if Snoop Dogg knows about “Ali Baba” – his loyal fan at the Thai/Myanmar border?

“Ali Baba”(as he called himself) tried to sell me steroids for seven bucks, Viagra, cocaine and ketamines – all while I was walking back to the boat. He even offered to deliver it to me. It’s a good thing I declined as about 5 minutes after we set off, there was a check-point in which either Thai or Burmese soldiers came into the boat and searched us.

The process tuned out to be a success as I was let back into Thailand with a new – “admitted until Nov. 21st – stamp on my passport. At which point, I will have to go to the Thai embassy in either Cambodia or Malaysia and make another attempt at getting the proper, education visa that I was supposed to have gotten in Canada. Of course, this time I’ll actually double check it to ensure I got the right one before I leave. So all in all, the process is a bit of a hassle but hey, I got to add a new country to my list of travels and a story to tell.

Having mildly sprained my ankle last Friday in sparring, I’ve been unable to train all week. I’ve just been limping around the camp. From my room ..to the restaurant ..to the internet area – just back and fourth. Limping around a Thai boxing camp while watching everyone else train isn’t actually what I call a good time. It’s not like I’m still in Pattaya either where I could certainly find entertaining – perhaps not as “constructive” – things to do. I’m in Chalong and there really isn’t much else here to do but train.

Anyway, this afternoon I jumped into the Muay Thai class and explained to the head instructor that I had injured my ankle and was unable to kick. He was pretty understanding and sent one of the other trainers to work straight boxing on the pads with me. Then, for the technique component of the workout, the same trainer would work the clinch with me while the other students worked on kicking technique & defences.

Basically, I was put through a custom workout based on my restricted mobility with a sprained ankle. If I couldn’t do something that was shown, a trainer would either adapt the technique so I’d be able to do it or just show me something completely different. I was pretty impressed actually. I wasn’t just left on my own to hit the bags.

As for Tiger Muay Thai itself, there’s a few negatives and so far, a lot of positives. I’m going to jump into one of the MMA classes either tomorrow or early next week to see how those are. I haven’t done any sort of grappling in about half a year so I’m sure I’ll be tapping a lot. Actually, with a sprained ankle, I don’t even know if I’ll be able to hold guard. I was watching Ray Elbe – the MMA instructor – on the mat today and he was pulling off all kinds of submissions. One was a slick choke from rubber guard, one was an inverted heel hook and another ..well, I’m not sure on this but it looked like he secured a choke and tap out with the sleeve of his shirt.