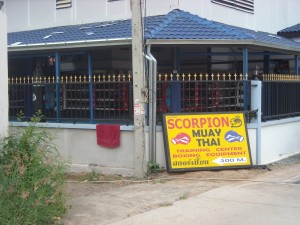 So I decided to swtich things up a bit and in this entry of the “Muay Thai training journal”, I’ll talk about, yup .. you guessed it – Muay Thai training.” Perhaps you were hoping for more stories about crazy Thai chicks and ladyboys but don’t worry, I’m sure I’ll have a lot more to talk about in my future entries as I apparently have a leader of some “firm” after me but more on that later. This entry is about the training..

What’s nice about coming out to Thailand to train is that other than these entries, I really have nothing else that I HAVE to do. I can focus entirely on my workouts without all the distractions I had back in Canada. No selling my life away via a job that I hate, no long commutes to the gym in the middle of winter – nothing at all. The only distractions I have here are the sexy Thai girls hollerin’ at me when I walk by, and that’s not entirely a bad distraction to have.

I’ve been trying to get 3 workouts in a day. I got sick a couple weeks ago and since then, I’ve had to cut one of my workouts out. Even now, I find myself caughing up flem and spitting it over the ropes in between rounds. Before I got sick, here’s how my typical day of training was lookin’..

A major selling point for the condo I’m currently renting was the fact that it has a huge swimming pool. I decided to replace the long distance road work that the Thai’s do for swimming laps. Typical Muay Thai workouts consist of jogging upwards of 20km everyday. With me weighing about 91 KG’s at the moment, that sort of long distance running would be way too hard on my joints. Swimming is low impact and it provides me the opportunity to do functional, Muay Thai related movements such as knees and shadowboxing against the resistance of the water.

This is when I’ve been going to Scorpion Gym and doing a typical Muay Thai workout. The late afternoon Muay Thai training consists of 3-5 rounds of skipping, 3-5 rounds on the heavy bag, about 10 minutes of stretching, 5 rounds of pad-work (3 rounds of Muay Thai and 2 rounds specifically for boxing). From there I’ll work some push-kicks on the heavy bag and to finish up, I try to get a few rounds of live sparring in. Whether or not I get to spar basically depends on who’s in the gym while I’m there and how busy the trainers are.

There’s 2 large rings at Scorpion. The ring on the left hand side is manned by Somphot (240 fights with 160 KO’s) and the right to the left is manned by “Whit”. Both trainers (who also happen to be brothers) offer something unique so lately, I’ve been rotating back and fourth between the two. Somphot is very technical. Rosalie (the gym owner) was telling me about how experienced, professional Muay Thai fighters will come in to train with Somphot and he breaks down and critisizes their technique to the point where they feel like the on-lookers in the gym will think they’re beginners. No matter how good you think you are, a few rounds of pad-work with Somphot will humble you pretty quick.

With that being said, while the first few rounds can be frusterating, at about the round 3 mark, you literally feel as though you’ve improved drastically within the last 6 minutes. Based on his instruction (if you can remember it all), you’ll kick the pads and when you hear the loud impact of your shin smashing against his leather fairtex pads and his praise of approval, “good man!” – something just clicks. Here is a quick video I took of Somphot working with one of the active fighters at Scorpion (I never caught his name) but apparently he’s currently a #2 ranked fighter at Ratchadamnoen stadium in Bangkok.

“Whit” on the other hand isn’t as technical and because he spends less time correcting your technique, he pushes a much quicker pace. While I’m doing pad-work with “Whit”, I usually find myself leaning over the ropes trying to catch my breath – oftentimes in the middle of the round.
Somphot for technique and Whit for conditioning. It’s always good to work with as many trainers as you can as each will offer something unique. Throughout my time here, I imagine I’ll be working with about 50 trainers so they way I see it – if each trainer can teach me even 1 new little trick/technique, I’ll become pretty well versed in the art – which is obviously the goal.

If the Thai’s spent even half as much time on weightlifting and strength-work as they did on long distance running, they’d be unstoppable. In my opinion, they run way too much for a sport that impliments 3 minute rounds. Long distance training can be beneficial for sports of high intensity, short duration bursts however, you also have to train specifically for explosive power if you want to have, well .. explosive power – which is pretty important in a sport where you’re trying to KO people.

It’s 12:19am right now and I’m about to head to the gym. That’s the nice thing about this place is that it’s a 24hr city. I also get the entire gym to myself since working out isn’t exactly a top nighttime priority for the people that come here. Rather, most people in Pattaya spend their evenings in the bars, drinking with the ladies. The lifestyle that most people fall into here isn’t exactly the healthiest. However, I’ve actually managed to stay away from the alcohol lately. If I go out, which I do simply out of boredom, my drink of choice is either water or orange juice.
There’s some really nice gyms here as well. California WoW gym is perhaps the nicest gym I’ve ever seen but the membership was a little too pricey. I just got a membership at Tony’s gym just off walking street. It’s got everything I need and they’re always playin’ good music in there. Check the photo.. 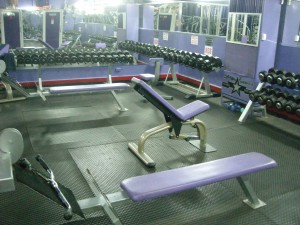 For my workouts, I try to focus on the usual, compound / multi-joint / fight-functional exercises that I feel will translate well over to Muay Thai. I do a lot of plyometrics (clapping push ups etc.), maximum strength work (low reps, heavy weight) for those KO shots and of course, some endurance work as well (high reps, medium weight, quick tempo).

With the core being the “strength center”, I try to implement a lot of rotary movements to increase the power of my punches. I got most of the core exercises I use from the combat core manual.
I’m heading down to Phuket to live and train at Tiger Muay Thai in a few days and I’m pretty sure they have the giant tractor tires and sledgehammers there so I’ll that’ll make for some good workouts.

From my understanding, they also have a supplement shop and a strength and conditioning program so it’s nice to see that some of the camps here in Thailand realize that Muay Thai specific strength workouts can be more than just push ups, pull ups and sit ups.

Eating healthy is both cheap and easy here. When I went to Issan, the girl’s grandmother was there and at 98 years old, she seemed perfectly healthy and surprisingly energetic. I guess that’s what happens when you breathe only clean air and eat only natural, unprocessed food. You know, the “organic” stuff that we pay top dollar for in our home countries.

I found an awesome Thai resteraunt where I’ve been getting about 80% of my meals. A plate of chicken/rice and a bowl of soup on the side runs me 30 baht (about 97 cents). The same resteraunt also serves a chicken/rice/vegetable combo for the same price. Looks good, doesn’t it? 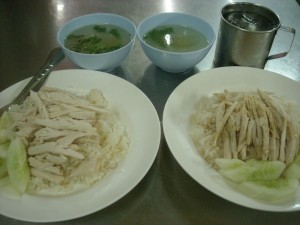 One thing I’d recommend to people who are coming here to train – bring your own supplements. They’re way more expensive here. So, since I haven’t splurged on a protein powder, I just throw back a few chocolate milks after my workouts at Tony’s gym. Chocolate milk has both the sugar and protein that your body needs to replenish depleted glycogen stores, trigger an insulin response and of course, start the muscular recovery process.

Since I’m leaving Pattaya in only a few short days, my next entry will profile some of the random, out of the ordinary scenes and photos that I’ve been able to capture throughout my time here. I’ll also give you an update on the situation with the girl I lent that money too. Things certainly took an interesting twist today..