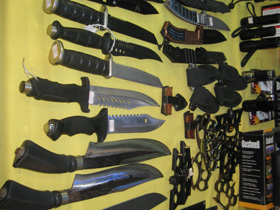 So once again, it’s been a while since my last entry. Since it’s been so long since I last made an update, there’s a lot to talk about. I’m still at the Patong Boxing Gym and I’m getting ready for a fight in a few weeks – which explains why I’m writing this on a Saturday night instead of being out at the clubs. I’ve cut out drinking (obviously) and I’ve made a lot of changes to my diet in an effort to improve my endurance.

After reading about alkaline/acidic balance and how the foods we consume effect our PH chemical balance, I checked out a food chart and discovered that pretty much everything I was eating had a very acidic effect. Apparently, when our blood pH is too acidic, “the hemoglobin in our blood deteriorates and the red blood cells can’t carry oxygen to the tissues”.

Randy Couture (who’s obviously in amazing shape) advocates consuming a diet rich in alkaline forming foods so I figured I’d give it a try. I hit the pharmacy and picked up some supplements (multi-vitamins, spirulina, beta-alanine) and I’ve been eating a lot of watermelon, lemons, pineapples and “leafy green” vegetables – all of which are supposed to be “alkaline forming”.

Anyway, I was able to get through my rounds on Thursday without stopping like I usually do so it must be helping. It’s still a little early to tell though because I was just working the mitts (boxing) and I wasn’t throwing kicks or knees. Still though, seems promising. Speaking of pad work, here’s a semi-recent video of my training..

While I’m posting videos, here are a few fights I recorded at the stadium the last time I went..

The guy with the pink armbands is Wut (a trainer at the gym here) and his opponent ended up dislocating his shoulder in the fight and had to stop. This next fight was a hard fought battle between “Tawatchai” and a tough opponent. “Tawatchai” ended up losing on points.

Although that’s it for the fights, I might as well post a few more videos seeing as how it has been over a month since my last entry. I came across a video on youtube that Mike Swick put together for his video blog and in it, him and Roger Huerta hit one of the markets here and get to witness the “circle of death” – which is basically crazy Thai dudes riding their motorbikes and cars on a questionably-constructed vertical circle of plywood. Here’s the video..

On a side note, I randomly saw Roger Huerta at the stadium one night and when the fights were over and everyone was clearing out, he actually approached myself and the guys I was with because he mistook us for his own group of friends. Oftentimes, when you meet athletes/actors/musicians or whatever, it can be sort of a let down but Roger seemed like he was a super nice guy. It was genuine too seeing as how we met him in a parking lot at the other end of the world. It wasn’t like he was trying to impress anyone but regardless, he couldn’t have been friendlier and he even took the time to snap a quick photo with one of my buddies. 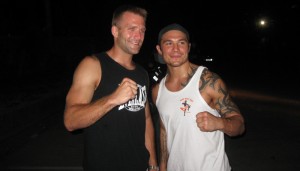 Anyway, when I first saw that “circle of death” clip on Mike’s video, I was a little jealous that in 3 long trips here, I had never come across the show before. Well, the following week I randomly discovered a market behind the big mall here in Patong and sure enough, they had the same thing. Here are the videos..

Admittedly, the first time the car came speeding by the top, I was a little freaked out. I mean, the natural reaction most people have when they see a 2 ton car speeding towards them is to get the fuck out of the way and that’s pretty much what I attempted to do at first. As soon as I did, I said to my buddy “I guess I’m going to have to cut that part out of the video if I decide to post it on the site or else I’m going to look like a huge pussy” but whatever, I’m too lazy to go through the trouble of editing it out.

And speaking of seeing crazy stuff at the Thai markets, I came across a vendor at the weekend market in Phuket town selling some pretty hardcore weaponry. I see similar stands here in Patong but I always figured it was just tourists that bought the stuff as a novelty. However, the market in Phuket town attracts mainly Thai shoppers and when you think about it, for a vendor like that to stay in business, the Thai people must be buying the swords, the knives, the hardcore brass knuckles with spikes on the ends, the tasers and whatever other weapons of destruction that he’s selling. Here are a couple pictures.. 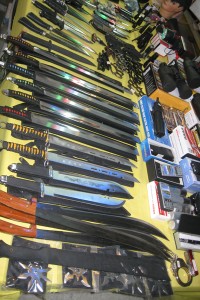 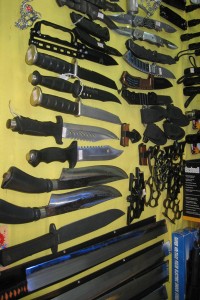 Anyway, I’m still here and still loving it. However, I’m thinking it’s time for a change of scenery so in about a months time, I’ll most likely roll up to Bangkok to check out some gyms (Kaewsamrit, Keatkhamtorn, Sitsongpeenong – as well as some others with some near-impossible-to-pronounce names) and then eventually make my way up to Chiang Mai. So, that means I’ll have a lot more to post about and a lot more gyms to review. Stay tuned.