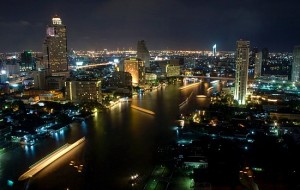 So after a gruelling 30 hour journey, I’ve made it back to Thailand and once again, life is good. It’s only been about a week since I arrived but already, the past week has been more eventful than the past 5 months that I just spent back in Canada. There’s a reason why I don’t update this site while I’m back at home and that’s because there’s absolutely nothing even remotely exciting to write about.

In the past week however, I have so many stories that I don’t even know where to start. I’m writing this entry from my new apartment (view it here), which is located down the road from the 13 coins gym in Bangkok. With this being my 4th trip to Thailand, and having lived here for over 2 years now, I figure it’s time to spend some time in the capital city and report on some of the gyms here and what better place to start than 13 coins?

13 coins is home to Saenchai Sor Kingstar, who is considered by most to be the best Muay Thai practitioner in the world today. He’s a current Lumpinee stadium champion (he successfully defended his title on Tuesday night) and of course, he holds several other titles including a WMC world championship. The fact that I can spar with him, clinch with him, ask him for tips is pretty crazy when you consider that out of the 6 billion or so people on this planet, there is nobody better than Saenchai. Here’s a short clip of one of my first padwork sessions in about 5 months as well as some footage of Saenchai and the other Thai’s at the gym doing some technique work in the next ring..

To add to that, John Wayne Parr is also training here right now. Perhaps you’ve heard of him? If for some strange reason you haven’t, you can update yourself here. I’d write it out but there’s way too many titles and accomplishments to start listing. So, the star power at 13 coins is pretty impressive but as for the actual training, well, it’s a little too early to tell. I’ve only done a couple workouts since I’ve been apartment hunting and working on getting myself settled so I could actually unpack my suitcase.

Now that I got myself set up, I can focus on training and I’ll be splitting my sessions between 13 coins and sitsongpeenong because apparently they’re somewhat close to each other (although that doesn’t always matter since the taxi drivers seem to get lost 80% of the time). Me and 2 other guys here went to Pattaya on the weekend (a completely wholesome getaway of course) and on the way to the bus station – which should have only a 5 minute drive – the dude took every wrong turn imaginable and ended up trying to drop us off at a buffet.

Oh, and when we finally made it to the bus station, we got hustled hard. As we were walking towards the ticket stand, some Thai guy loured us over to one of the busses, said he was going to Pattaya and that it would only be 100 baht each. We didn’t really think anything of it. After all, we were there to take a bus to Pattaya and that’s what we were invited to do. So, we just stored our luggage and hopped on.

We should have assumed something was wrong when we realized that nobody else was on the bus besides us. One of our friends was on the bus that left before us and he said that his bus was packed (with Indian sex tourists) so he thought it was strange that ours was empty. Well, long story short, the bus that we got on stopped about 60 times and was picking up and dropping off local Thai’s every 2 minutes. A trip that should have taken us about 90 minutes ended up taking about 3 and a half hours! We saved a whole 13 baht (43 cents) on the ticket though so it was totally worth it.

In Pattaya, I was hoping to meet Alistair Overeem at the Golden Glory gym but we had just missed him since he went up to Korea to smash Ben Edwards at K-1 Grand Prix semi-finals. The Golden Glory team bought out Scorpion Gym about a year ago and I guess they’re sort of using it as a transition camp so their fighters don’t have to deal with Jet Lag when they’re fighting in the K-1 events (at least that’s a good story for the owner to tell the wife). Yeah, I’d go with that..

It hasn’t changed much though. Just different branding on the bags and rings, more posters on the wall and from my experience, longer wait times since the trainers have to go through team Holland before you get your pad time in. One of the trainers from Scorpion (Whit) is still working there. Here’s a quick video I took of the place (nothing overly exciting)..

I’ll be going back at some point for sure. Not because I was overly impressed with the training or anything (although it wasn’t bad) but because the owner there had his own line of Windy products and they’re sick! I’m going to have to pick up a pair of Thai pads at some point before I go back to Canada to visit next summer.

Anyway, this is Thailand so of course, there’s going to be stories about girls. So far though, the girls haven’t been crazy (like this one … or this one). I think I’ve learned my lesson by now and I’m targeting the “good” girls instead. I met a girl online before I came (from an epic website that I’m not even going to mention because it’s stacked with smoking hot Bangkok university girls and I want them all to myself).

Anyway, she lives with her family near the airport and after my first day training at 13 coins, we made plans to get together and get something to eat since I would be in the area (this was before I got my current apartment and me and my friend were staying downtown at the time). I didn’t really think much of it. I actually pictured meeting this girl and eating fried rice from a random Thai street vendor (I’m classy).

Since I didn’t want to make my friend take a taxi all the way into town alone, I invited him along. In retrospect, I guess the best move would have been to just given him some extra taxi money. Anyway, I had a quick shower after training but since this was sort of a spur of the moment thing, I didn’t have any “nice” clothes. Just MMA style shorts, a tank top, a shirt and a hat.

So it’s post training, I’m dressed like a thug, I’m sort of sweaty even though I showered and I’m bringing my friend, who’s a tatted up MMA fighter. In order to meet her, I just passed my phone to the taxi driver and she instructed him where to go. As the driver pulled into the restaurant, me and my friend just sort of looked at each other like “uh oh .. This is going to be expensive”. This place was insane. It had to be one of the biggest, nicest restaurants I’ve ever been too.

To add to it, the girl rolled up in a taxi behind us, got out and really, you guys should have seen her. She must have spent 2 hours getting herself ready. I felt a little awkward during the dinner, but I’ve since redeemed myself since so it’s alright. This girl though, she says this was her “first time out at night”. These Thai girls man, they go from one extreme to the other.

I’ve spent so much time in Patong, which is a place that’s full of hookers and even if they’re not, they still have a “spring break” mentality so partying until 4 in the morning and going home with random dudes on a nightly basis is seems pretty normal for them. Most tourists spend their time in Patong, Pattaya, and certain areas of Bangkok so I guess they’ll judge Thai girls by their encounters with them in those isolated areas but really, from what I’m seeing here now, the majority of them are very reserved and probably haven’t been with more than 1 or 2 guys in their whole lives. At this point, I definitely welcome the change.

And speaking of Thai girls, my friend that I came down here with also met a girl online a few weeks before arriving. His on the other hand, isn’t exactly as wholesome as mine is (or seems to be). She dresses like a bar girl and has tattoos on her hands (which way too extreme for an average Thai girl). I always consider tattoos on bar girls as sort of a symbol of how long they’ve been in the “game” for. Office workers get gold plated pens and raises, bikers get badges, martial artists get belts and bar girls, well, they get tattoos. 50 “customers” for some tribal on their lower back, 500 “customers” for a dragon wrapping up their thigh and for a full back tattoo, that’s a 1,000 cock “customer” minimum.

Anyway, on one of our first nights here, my friend had his girl over and he was all snuggles, trying to get her to do a lot more of course. After about an hour or so of snuggling, gentle caressing and whispering sweet nothings into her ear (lol), she decides that she was going to leave and “call him tomorrow”. So, he sees her to the door, plays it cool, says his goodbye’s and the second the door closed, he ran to the washroom and started throwing up.

This guy was holding in his vomit in an attempt to get some. If that doesn’t show where his priorities are, I don’t know what does. Apparently food poisoning takes a back seat to getting laid. Anyway, I just thought it was funny at the time.

So as for what I think of Bangkok so far, there’s definitely some pros and cons. The air is dirty, but there’s a lot of big name fighters at the gym – which is just down the street from where I live. I like the fact that there’s a lot of “good” normal girls here, but then again, Phuket is paradise. Regardless, it’s a welcome change and it’ll give me a chance to report on some more gyms..

I get a lot of questions from people who are looking to come to Thailand to train, which is great, so I set up this forum where you can ask your questions and I will answer them directly (others can add input as well). I figure it’s a lot better to do it publicly so other people can browse through the question/answer section and get all the info they’re looking for as well.