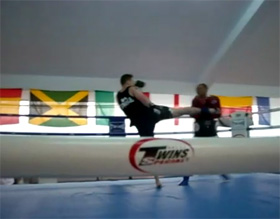 So there’s been a longer than usual delay between entries and I should probably explain why. I’ve been putting 8 new sites together (7 exercise sites and 1 new Muay Thai one) in an attempt to get some money rolling in so I can stop stressing about having to leave this country that I’ve fallen in love with.

I don’t plan on leaving until May (so I still have plenty of time) but I plan on coming right back here after the summer to pick up where I left off with my training. And speaking of my training, for the first time I’m going to post up some videos of my pad work.

I haven’t posted any videos thus far for a few reasons. The main reason was because I didn’t want some of the owners to see who I was because if they know I’ll be reviewing their camps, they’re more likely to treat me differently and go above and beyond to secure themselves a good review.

The benefit of posting my progress – which in my opinion, outweighs the negatives – is that it will serve as motivation to improve even more over the next few months. I’ll feel more accountable knowing that my readers will be critiquing my technique and progress so I’ll be obligated to take the training seriously.

Prior to coming here, my experience was very limited. I came here last year for a couple months but to be honest, I was only training about 4-5 times a week. I made a lot of improvements but about a week or so after I got back to Canada, I ended up messing up my back while performing bent over barbell rows at the gym. And yea, that actually links to one of the exercise sites I’m working on – just trying to get Google to index it..

In addition to coming here the first time, I had done some submission grappling (for about 4-5 months) but never any striking whatsoever. The extent of my striking experience was hitting one of those “wave master” punching bags in my basement. Anyway, here’s a video of myself training near the end of my first trip..

Not so bad, right? Well, due to the back injury, and about 8 months of no training any martial arts at all, here’s what my pad work looked like during one of my first sessions this year at Scorpion Gym.

So that’s the “before” video. As you can see, I’m completely awkward in my stance, I’m slow, my technique is terrible (especially the kicks) and I can’t even stay balanced. Believe it or not, at the time I actually thought I was awesome. You go through the motions and it actually feels good. Then you check yourself on video tape and it’s really an eye-opener.

So that video was filmed about five months ago. Since then, I’ve been training 6 days a week – with the exception of some time off due to a sprained ankle and pink eye, which sucked! I’ve trained at a lot of different gyms, but the three gyms that have helped me the most are Scorpion Gym, Tiger Muay Thai and most recently – where I’m at right now – Patong Boxing Gym. These two videos were shot last week ..and yes, I know – I need a tan!

Comparing the “midpoint” videos – which is what those are – to the first video, it shows a lot of improvement and I’m pretty happy with it. I’m still far from where I’d like to be though but I still have 4 full months of training to go. I really want to get those rapid-fire kicks down perfectly so lately, during every pad-work session, I take off my gloves and do nothing but work on my repetitive kicking for a full round.

And I’ve sure you’ve noticed that I haven’t had much lady-drama to talk about lately. That’s because when I was staying at Tiger Muay Thai, I didn’t really bother going out much since it’s so far away from the nightlife district and even now that I’m living in Patong, all I really do is focus on my work and training. I think now that I’ve completely cut out drinking, I’ll make even better improvements over the next four months.

I did however go out and party on new years eve – but who didn’t, right? The scene here was pretty crazy. I wanted to start by drinking a couple beers while getting a foot massage – which only costs about 6 bucks an hour here. When I got to the massage place, all the massage girls were having their own new years party with free food and drinks out for everyone.

They kept giving me belvedere mixed with orange juice – which I’m sure was bought by one of their rich, foreign boyfriends – and to be honest, the rest of the night is a bit of a blur. I did however check my camera the next morning and found this short video. It’s not overly exciting by any means but it’ll give you an idea as to how they celebrated new years here.