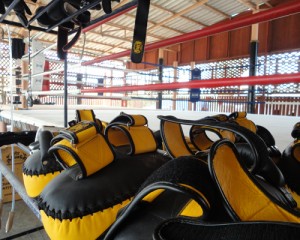 Well, it looks like after 4 trips and a couple years of living here, I’ve caught a break. In my last entry, I sort of went on a rant about how training in Bangkok was overrated because the prices were higher (than both Phuket and Chiang Mai) and I was having a really hard time finding a good trainer who actually wanted to teach me, as opposed to just hold pads, tire me out and collect my money.

As it turns out, the manager of the Patong gym heard of an empty gym here in Bangkok, drove up from Phuket and with the help of an investor friend, she was able to secure the property and best of all, she asked me to help run it! So, I’m writing this from one of the on-site rooms now and my training (or lack-thereof) issues have been solved. Now, I can just walk out of my room in bare feet come training time and head to the rings.

Update (August 14th, 2011): I am no longer associated with this gym (I’m currently living in Chiang Mai) so bear in mind that this write up was written on Feb 17th and I have no control/knowledge of what the gym is currently like.
Update (August 18th, 2011): The gym (including the training area) is currently flooded at the moment and while it’s technically still open, I wouldn’t even recommend going until the water gets cleared out.
Update (September 15, 2011)I’ve been informed that the flood has been cleared out
Update (November 1, 2011)The gym has been permanently closed.

Obviously, due to my involvement with the gym, this will NOT be a review. I’ve built up Fight Passport to what it is today from being honest about things so I’m not going to drift from my principals now by putting up a fake review to drive business. Instead, I’ll use this entry to just let you know what I’ve been up too the past few weeks and give you an overview of the place.

I’ve spent the last 2 weeks developing the gym website (which is why there’s been a long delay between entries). They’ve decided to call the gym “Kittana Muay Thai”. When I first heard the name, I immediately pictured a girl in a spandex blue body suit who cuts off peoples heads with her fan. I don’t even know what it’s actually supposed to mean (something in Thai language) but whatever, the “Kittana” name has grown on me and I kind of like it now.

The gym is located at On Nut 65 and has sort of a countryside feel to it, which is perfect because if you’ve been reading my entries for a while now, you know that until this trip, I’ve always sort of stayed away from Bangkok due to the crowds and the pollution. Here, neither is an issue. The air is clean and the area is pretty quiet. Even when I leave the gym to go shopping or something, I usually just head to Seacon Square – which is one of the biggest malls in Thailand – but it feels like a mall back home in the sense that it’s never overly crowded. I just finished up writing up a long page about the gym location on the website so I’m not going to bother re-writing it all here. Instead, just click here if you’re interested in finding out more.

Right now, the training I’m getting is incredible. It’s just me and my friend here at the moment with two trainers so it’s almost like we were rich, bought a gym for ourselves and hired them to train us privately. I’m getting a full 5 timed rounds on the pads followed by sparring and clinching with them. The two trainers here now are “Lucky” and “Dan”. Lucky is incredible. Seriously, he’s one of the best trainers I’ve ever had and I’m not just saying that. Dan doesn’t have as much pad holding experience as Lucky does but you can tell that he really wants to teach and see us improve so that’s what matters to me. His pad holding skills will develop over time and he’s great with clinch work and technical sparring. Here’s some video footage of Lucky training Dan for a title defense he had up in Issan a few weeks ago..

As for the on-site facilities, there’s 2 rings, 13 rooms, a restaurant and an MMA cage. In the future, we’ll probably get an MMA program started but for now, the focus will be on Muay Thai. However, the cage is there for guys who want to do some grappling or MMA sparring on their own. The MMA cage was put in by the last owner, Ismael Grid, who was really into Brazilian Jiu Jitsu.

While on the topic, “Lucky” actually trained Ismael to become a WPMF world champion during the time when the gym used to be under his ownership (check the records here). That’s just another testament to what a good trainer he is. During that time, the gym was called MTI and before that, it was operating under the names “Majestic” and “Luktupfah” (the two teams shared the facility).

I sort of found out about the gyms history in the strange way. I figured there were some stories to be told about the place by the “Luktupfah” sign near the entrance and by the framed photos of past champions on the wall. I never really asked much though. There’s a group of kids, along with 2 trainers that come here to train at around 6:30 every night so I just assumed that the Luktupfah name was from them.

Anyway, about a week ago I was doing pad work and whenever we train, the gym “caretaker” (overweight guy that lives at the gym) stands ringside and watches. Between rounds, I asked him if he used to train by shadowboxing and saying “you train Muay Thai before?”. Lucky then answered on the “caretakers” behalf because he doesn’t speak English and told me that he’s been a trainer for a long time. Here’s when the story came out..

Apparently the man – who I thought was just an overweight gym maintenance guy – was the trainer who developed Orono Wor Petchpun into a Lumpinee champion, a 3x champion of Thailand and one of the best fighters in the history of the sport back when the gym was operating under the “Majestic Gym” name. If you’re never seen Orono fight, just do a search online for the videos. He’s knocked out Yodsanklai twice, beat Buakaw twice, he’s beat Saenchai, he’s beat Lerdsila – he’s been in there with a who’s who list of fighters. That’s Thailand for you though, things are never what they seem (a more detailed write up on the history of the gym can be read here).

So as for all the detailed information on the gym, just check out the website. Things are obviously just getting started here but it’s cool that I’ll have some input on things. Lucky will soon be bringing his son here, along with some other fighters from his hometown to fight at the major stadiums here in Bangkok. More trainers are on standby at the moment for when things pick up as well. As for the type of trainers we’re going to employ, they have to WANT to teach. No secrets, no hidden tricks from the foreigners; none of that!

I’d ideally like them all to be just like Lucky and Dan. Meaning; athletic guys in their 20’s who are in the twilight of their fighting careers. Reason being is because they can spar, clinch and basically take a more hands-on approach to the training. It sort of sucks when you go to a gym and the in-house Thai fighters are all teenagers who weigh about 120 lbs or older trainers (in their 40’s or so) who don’t want to clinch or spar with you after holding pads.

So I’ll wrap this up for now because I’m sure I’ll have a lot more to write about as things progress here. I’ll still be gym hopping on occasion to showcase other gyms throughout Thailand (as I’ve been doing since Fight Passport started) and trust me, I won’t be bias with my opinions. When I come across gyms I’m impressed with, I’ll be sure to let you know.

For everyone who has trained in Thailand and felt like there was something lacking, or changes that you would make if you could, be sure to hit me up and let me know what you were and weren’t happy with. It might give me some more ideas for Kittana..