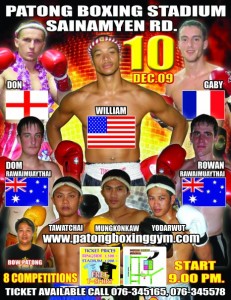 So I rolled by the stadium last night to watch the fights. Most of them were incredible so I figured I’d throw up a quick entry. Six guys from the Patong Boxing Gym were fighting – which made things a little more exciting (and gave me some additional incentive to lay some bets down). On a side note, the Muay Thai stadiums are the only acceptable place to gamble in Thailand. It’s highly illegal everywhere else.

Anyway, of the 6 fighters, 4 were Thai’s (trainers here) and 2 were foreign students. I was a little nervous before the fights got underway because I rarely see the Thai trainers working out. They’re usually busy training us students so they seem to neglect their own training routines. I’d ask my trainer every day leading up to the fight if he had done any training and occasionally, he would say that he went for a run – oftentimes he would just shake his head and say “no, not train”.

The night of fights started off with the kids. They must have been about 8 years old and without any knockout power at all, but it was still entertaining to watch. One of the kids (seen below in the black shorts) spent the majority of the time running around the ring to avoid being cornered by his much larger opponent, yet he was still landing some crazy kicks and knees as he was scrambling around. He ultimately ended up losing on points but he fought with a lot of heart and it was hilarious to watch. A good start to the night for sure. Here’s a quick video..

VIDEO OF KIDS FIGHTING (Coming soon, taking a while to upload)

The next fight featured one of the Thai’s from the gym. I’ve never actually seen this guy train – himself or anyone else for that matter. It seems as though he just does maintenance work around the gym. He’s either sweeping, watering the plants or cleaning the rooms. He’s a super nice guy but to his detriment as a fighter, he’s extremely small.

He’s 26, with a couple hundred fights, but even the announcer at the stadium announced that he was 16 years old. To my surprise though, he’s an awesome fighter. He was lacing his opponent with some big shots (mostly punches) but due to his lack of size/overall power, he wasn’t able to get the knockout and when it went to decision, the judges awarded the victory to his opponent because in Muay Thai, punches don’t count for any points at all.

A couple fights later, another one of the trainers entered the ring. His name is Yodarwut and he’s the most active fighter at the gym. He’s been fighting on nearly every event that I’ve been too. He recently got married so perhaps he’s looking to save some extra cash. Anyway, every time I watch this guy fight I’m amazed by his heart.

Most of the fights I’ve seen of his end up going to decision. I remember watching him fight a guy that they flew down from the Por Pramuk gym last year and at the time, he was really out of shape. He had just come back from a long stint back at his home and as soon as that fight started, you could tell that he was a little less precise with his striking than his opponent. That particular fight ended up going the full 5 rounds and he received heavy applause both during and at the end of the fight for the effort that he gave.

The fight last night however, was a different story. Now that he’s back in shape, he looks sharp – literally. He ended up catching his opponent with a devastating elbow and within 10 seconds of it connecting, the right side of his opponents victims face was drenched with blood. Check the video below (the elbow strike I’m talking about is at 1:03 into it).

That strike ultimately ended the fight as his opponent was bleeding heavily and Yodarwut became tentative to engage beyond a circuit point, and for good reason! The fighters at the stadium are NOT required to get any blood work done prior to stepping in the ring so for all he knows, his/your opponent COULD be HIV positive. It seems as though the thought of potentially contracting something serious rarely enters the minds of the fighters but it’s definitely something to consider before making your decision. Anyway, the doctors eventually called a stop to the fight at Yodarwut was awarded the victory!

For the next fight, we have my trainer (Mungkonkaw aka. “Nuy”) against some stiff competition – one of the trainers from the Tiger Muay Thai gym. Tiger Muay Thai is one of the most successful, most popular gyms in the country and due to their success, they’re able to hire some great fighters to train their guests.

“Nuy” was originally scheduled to fight “Ritt” but when Ritt walked into the stadium, I noticed he had a cut over his eye so rather than fighting Ritt, “Nuy” fought Tanwa – who like “Nuy”, has over 240 fights. Up until this point, I had never seen my trainer throw a punch, a kick – nothing! I had no idea what to expect but as soon as the fight started, he looked extremely comfortable, as if he hadn’t missed a beat with his training.

I guess when you’ve been training and fighting since you’re 8 years old, it becomes second nature and when it comes down to it, your instinct takes over and your reaction to everything is just automatic. Anyway, “Nuy” ended up winning the decision as a result of some great knees in the clinch. Here’s a brief video I took of one of the rounds..

Alright, the next fight featured a fighter from the Gym named Tawatchai. Tawatchai – who’s the current Bangla stadium champion here in Patong – put forth what was by far the most impressive performance of the night.

His opponent – who was much larger and much more experienced – was flown in from Bangkok specifically for the fight in order to give Tawatchai a tougher challenge. Well, Tawatchai stepped up to the challenge and ended the fight in brutal fashion. Check out this first video..

Now, although I appear to be close to the action while filming that, I really wasn’t at all. The close proximity of the video is a result of the zoom feature on my camera being fully optimized. I was a good 50 feet away and yet, it still sounds like Tawatchai is connecting with a baseball bat rather than his shin bone.

And yep, here’s the finish…

That’s definitely a rough way to earn a couple hundred bucks. Hope it’s nothing too serious.

It wasn’t the most technical fight, but let’s be honest, in the heat of the moment, you go to what you’re comfortable with. Ten to twenty years experience of fighting with both feet on the ground usually triumphs over the 6 weeks you’ve spent kicking the pads – which of course, explains why there’s not many kicks being thrown here..

Later that night, William said that before the fight started, a few members of the primarily Australian crowd were shouting obscenities at him – which only gave him further motivation to finish the fight in convincing fashion.

After ending the fight with a knee to what appears to be his opponents chest, William said he chanted “Aussie, Aussie, Aussie” to sort of rub the victory in the faces of those who were insulting him before things got underway.

To finish things up, a veteran foreign fighter named Don took on an experienced Thai guy. Don is from England and like myself, he came here once, got hooked on the place and now he sort of splits his time between Thailand and his home.

In order to earn some additional cash while he’s here so he can stay longer, he fights quite a bit at the stadium. He was here last year and towards the end of his trip, he had 3 fights booked within a 10 day period, or something crazy like that.

Anyway, his experience ended up paying off for him here as he ended up overwhelming his opponent with barrages of overhand rights and hooks. He was pushing forward the entire fight and although punches aren’t awarded any points by the judges, the fact that he had his opponent back-pedalling for 5 straight rounds got him the victory. 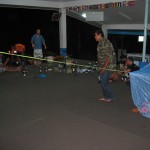 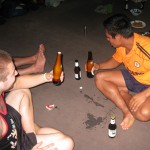 AFTER THE SHOW IT’S THE AFTER PARTY!