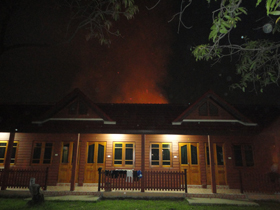 The display picture on this one was taken a few weeks ago when there was an uncontrolled fire behind the gym. Actually, it was about 10 feet away from my room but luckily, the fire department came and put it out on time. It wasn’t overly dramatic or anything, and at least I got some cool photos out of it.

Funny though, when I noticed the fire, I started cramming my belongs into a bag in case I’d have to flee and the first thing I packed (before my credit cards, before my passport even), was my laptop. My friend here who plays online poker for a living did the same.

Speaking of which, the reason why there’s been such a long delay between entries is because I bought an e-book that’s basically a step by step blueprint showing exactly what the author does to make approximately 50,000 dollars per month online.

Basically, the guy makes “mini sites” to capture targeted “organic” traffic (search traffic from Google) and earns a living from the visitors clicking the “adsense” ads he puts on the sites. The guide is about 250 pages and since reading it, I’ve been obsessed with making these sites to hopefully get some recurring income coming in so I can stay in Thailand as long as I want (which is forever because I’m getting settled and I love it here). Click here to see the book if you’re interested.

Anyway, as I mentioned in my previous entries, I’ve now living at and helping out with a gym in Bangkok called Kittana Muay Thai. There was a point where I was starting to get frustrated with things because the reality wasn’t suiting my vision of things. Now though, things have improved a lot. If I’m going to be involved at a gym here, I’d want it to be about Muay Thai first and foremost and have an authentic atmosphere.

At first, I felt like the priority here was shifting towards just making money off foreigners but now, it’s become a real Thai style gym that’s putting a lot of effort into developing future champions. We’ve taken 4 Thai kids into the camp and about 5 times per week, there’s a group of about 10 other Thai youths that come in to train. They have a trainer that has been training them for years and he was donating his time so that it gave the kids something positive to do and kept them out of trouble (the gym is located in a poor, yet friendly area). Now, the trainers here are helping out and training them as well. It’s just a good vibe having them all around.

The other day, I was woken up by a bunch of yelling and cheering coming from the ring area. Being half asleep, and comfortable in my bed, it took me a while to actually get up, head to the training area and see what the commotion was. When I finally did, I saw 2 of the kids clinching and throwing knees with 100% power. I quickly ran back to my room and grabbed my camera. Unfortunately, I just caught the very end of it..

The kid in the black shorts, his name is “Mhing”. He one of the fighters that lives here and hopefully we’ll make him into a champion one day. He fought last night and dominated his opponent in route to a stoppage in the second round. Here’s the video..

Also on last nights card was “Nic”. Nic is the 6 year old son of “Lucky” – who’s the head trainer here and a former Lumpinee stadium champion. Nic is the cutest kid and when he trains, even with 10oz gloves on, the gloves look huge and weigh his arms down because he’s so tiny. Anyway, last night he seriously outclassed his opponent and even displayed some high level techniques dispite being so young. Here’s the fight video..

There’s going to be a lot more fight videos to come of these kids. Nic is fighting again in a couple weeks. This is cool because since I’m probably going to be here long term, I can sort of follow and document the fight careers of these guys. Both of them (as well as a couple others from this gym) have the potential to be VERY good fighters (at least based on their performances last night anyway). It’ll be nice for them as well since I’m sure most of these guys don’t any footage of 95% of their fights. I’ll show the kids this entry later tonight and I’m sure they’ll be stoked to see themselves on video. Actually, I’m going to start uploading a lot of their training footage + photos on the facebook group so if that’s something you’re interested in, click here then click “like” (you know the routine by now).

I guess that’s about it. I’ll finish this up with some training footage. In this first video, there’s an obvious size difference but the fact that the kid just goes into “beast mode” and starts tossing the other two kids around proves once again that size matters.