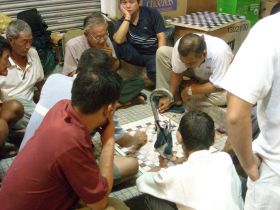 Yeah, it was that time again. I really don’t see the purpose of spending 12 hours in a van simply to cross over to a new country, fill out a couple forms, get a new stamp on my passport and re-enter Thailand for another 30,60,90 days (however long the new visa is valid for). The whole concept is frustrating but I ended up getting a new tourist visa so I guess I can’t complain. The 60+30 day visa that I got was worth the sacrifice.

I think I’ve finally figured out how these visa procedures work and if I time things correctly, I should be able to stay in Thailand for as long as I need. I was talking to one of the other guests here over lunch today and he said that he came here last year and decided he wanted to stay longer but they told him he couldn’t and that he had to leave – which was true.

However, the immigration officials didn’t mention the fact that “leaving” only entails crossing the border, paying a visit to a Thai consulate in a bordering country and re-entering Thailand. He ended up going back to Canada. Needless to say, when I told him about his options, he seemed pretty stoked and now he’ll possibly be staying even longer than he initially planned. Thailand really has that effect on people. Visiting Thailand – and southeast Asian in general – can truly be a life changing experience.

So as for Malaysia, the one night I spent in Penang wasn’t long enough to form a solid opinion of the place. The Penang residents for the most part spoke better English than the Thai’s. Of course, like I said, this is from only a days worth of observation. Perhaps they were able to speak English so well on account of dealing with some many foreigners as Penang is outfitted with all sorts of hotels and resorts that accommodate both the tourists and the thousands upon thousands of “visa runners” from Thailand like myself.

I’m trying to think of a way to make this all sound exciting but to be honest, it really wasn’t. I guess if you’re to take anything from this, it’s that there’s a lot of confusion regarding the visa regulations in Thailand.

Thailand recently limited the number of 30 day stamps that visitors are allowed to get to 3 within a 6 month period. However, they haven’t restricted the amount of back to back tourist visas and other types of visas that visitors are allowed to get. Worse case scenario is that you may have to switch up which bordering countries you visit in order to get them. And I suppose it’s also a good idea to occasionally get a new passport every now and then so they don’t see 8 pages of Thailand visa stamps in there and start to ask questions.

Last night we had another full moon “fight night” and BBQ here at Tiger Muay Thai. Once again, the fights were awesome. The best fight however was an MMA match between one of the Thai trainers and a BJJ practitioner straight out of Brazil. You’re not going to believe this but the Thai guy won – via an armbar from the mount! That’s right! The Thai submitted the Brazilian! It was amazing! A lot of exclamation marks I know but that’s how awesome it was!!!!

Within a few days I’ll have my write up complete along with the videos of all the fights.