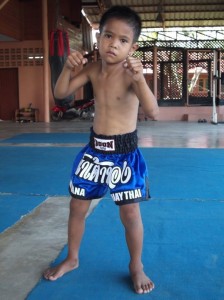 As usual, it’s been a long time between updates. Once I finish up a couple other things that I’m working on, I’m going to start updating this site more often. After all, this is the site that I actually enjoy working on. My other sites are purely to turn a profit, this one is more of a hobby/passion site. Anyway, I have an idea in mind for Fight Passport that I’ll be implementing soon so the site will be updated a lot more.

Aside from working on my online stuff, I’ve still been living at the Kittana Muay Thai gym and training 6 days a week. I feel like I’ve been improving a lot here (especially in the clinch) but I just got an embarrassing beating this afternoon while sparring with one of the trainers here.

I was doing alright at the start, until I decided to cut out his back leg when I caught his kick and from that point on, he was determined to show me up in front of everyone (I’m sure it didn’t help my situation that a few Thai guys from the neighbourhood just happened to be standing around the ring watching). There’s no way that he wanted to be shown up by a foreigner.

Anyway, as good as the Thai’s are Muay Thai, it’s always comforting to know that when it comes to grappling, most of them don’t have a clue what they’re doing (aside from the clinch of course). Today, after sparring, “Purt” (the trainer that beat me down) wanted to do some grappling with Joel – who’s a student who’s here from Team Quest in Portland. The match went, well ..exactly how you’d expect it too..

Speaking of grappling, I’ve been sort of getting bored with Muay Thai lately. I’ve been getting bored with a lot of things actually. I’m sort of in the “groundhog day” rut that I felt I was in back home. I hate feeling like I’m re-living the same day over and over again even if that day consists of just relaxing, training and going to the mall for fruit shakes and ice cream. I need variety.

I was planning on heading to a BJJ school here in Bangkok because they had an instructor named Adam Kayoom – who’s a black belt from American Top Team under Ricardo Liborio. I figured that’d be the perfect way to switch things up and prevent my boredom but right before I was about to go, my friend told me that Adam wasn’t teaching there anymore. Not too sure what happened but that definitely sucks.

I almost see BJJ as a valuable education. It’s a lot of work to get a black belt but it’s fun-work and once you get it, I’d assume you can get teaching jobs all over the world. There’s good money for private lessons, you could start a school, travel – whatever. With the increased popularity of mixed martial arts, there’s going to be plenty of opportunity as well. Seems like a solid investment to me.

Anyway, back to Muay Thai. Since there’s been such a long time between updates, I have a lot of videos so I’ll post a couple of my training. One was from today and the other (the boxing one) was from about a week ago. The guy holding the pads is a new trainer here and I guess they brought him in from Fairtex but apparently he used to work at Rompo gym as well because he said he used to train Ramazan Ramazanov.


Moving on to some REAL padwork. There was recently a video put out by fight promoters that showed a fighter by the name of Sarm-A kicking the pads 50 times in just 22 seconds (with power too). When the video was filmed and released, Sarm-A was hyping an upcoming fight with “Kongsak” (you can see at the end when Sarm-A says his name and then motions as if he’s slitting his throat). Here’s the video..

Well, last Tuesday is when the fight went down at Lumpinee stadium and although I wasn’t able to make it, a couple guys from the gym were going (along with the trainers) so I passed my camera to a guy we’ve nicknamed the “cowboy” due to his passion for a certain Bangkok street (if you’ve been here, you can figure that one out). Anyway, apparently he ended up sitting ringside next to Rich Franklin. Here’s the video footage he came back with (original footage replaced with a better quality video)..

I’m not too sure what brought Rich Franklin to Bangkok and I guess the guys from the gym didn’t ask him. The trainers however gave the “cowboy” a business card for the gym and when he handed it to him, instinctively he said to Rich that the trainers here are “really good in the clinch”, before thinking that he might take offense to it seeing as how he got dominated by Silva. He didn’t though and apparently he was cool about it.

Other than that, like I said, things have been pretty quiet. There’s a couple “gym dogs” here. There’s one named China, who’s an American Staffordshire Terrier and there’s another named “Kiaw”, who’s a Thai dog (not sure of the breed). Anyway, these dogs are awesome. About 3 weeks ago, we were all hanging out around the restaurant and nobody really noticed, but there was a baby cobra a couple feet away from us.

“China” saw it though and as soon as she did, she attacked it without hesitation and obviously killed it. Apparently the baby Cobras are even more dangerous than the adults because they have no control over the amount of venum they use so it’s basically a full dose every time they bite something. So, had China not been there to see and attack it, one of us could have gotten bit.

Apparnetly “China” also stopped a random Thai guy from breaking into the gym rooms before. I guess he hopped the fence and China ran up and bit him. This happened before I even got here though so I’m not really sure of the details.

Anyway, “Nic” (a son of one of the trainers) fought a few weeks ago and got his 5th win in 5 fights. He left back to his home in Issan to live with his grandfather and go to school (as did a lot of the other kids who were training here the last couple months) so things have gotten a lot quieter around the gym without them. This is getting pretty long now so to finish off the entry, here’s the video of “Nic’s” latest fight.