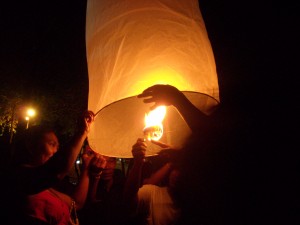 There’s a holiday here in Thailand called Loy Krathong. I knew nothing of it until last year when I was walking down the main street in Patong and noticed a bunch of vendors set up under tends selling all kinds of awesome food. There were smoothie bars where you fill an empty cup with assorted fruit and pass it along to be blended for you; there were stands selling mini-kegs of local beer; there were people barbequing fish, chicken, beef and there was even massage areas set up in the middle of the street where people could just kick back, relax and watch the happenings while getting a foot rub.

The food, drinks and massages aside – the real fun happens down by the beach (or any body of water throughout Thailand). The significance of the holiday – which takes place when there’s a full moon in November – is to honour Buddha and the goddess of water – Phra Mae Klongkha. “Loy” means to float and “Krathong” means a raft. When the Thai people set their raft afloat, they oftentimes add clipped fingernails and hair to the raft as a symbol of letting go of the bad parts of oneself. However, that information is straight off of Wikipedia and I’ve never actually seen them do that.

The rafts are cool but what’s cooler is the hot air lanterns that everyone lights and then sets sail into the night sky. It’s really an awesome sight. I’m sure it’s pretty hard to picture based on just my description of it so check out this video.

As you can see by the random fires and people dodging fireworks from every which angle, you really have to be alert while you’re there. Another tradition of Loy Krathong is beauty pageants. Last year, there was actually a ladyboy pageant going on and this year it was women ..at least I think they were women. Ah, this is Thailand so who really knows.

Loy Krathong is also an awesome day to be a single guy in this country. It seems as though every hot Thai girl is looking for a date for the night. I almost want to compare it to Valentines day in other countries. Of course, on Loy Krathong, the guy doesn’t have to go all out and pay for fancy dinners and jewellery. 3 dollars for a meal at the festival, 3 dollars for a lantern and another 3 dollars or so for the raft and the girl is happy!

I’m still living and training at Tiger Muay Thai. Now that it’s high season, there’s a lot more students coming in from all over the world and the classes have been getting busier and busier. The solution to that is a rush expansion and within a months time, the training area at the camp is going to almost double in size. I think they’re also hiring about 5 or so more trainers – one of which is ranked number 3 in the country.

In some of my upcoming entries, I’ll document the expansion and I’ll soon be doing my review on this camp. In my review – as I know a lot of you are curious – will be video tours of all the on-site and nearby accommodations.

Time flies when you’re having fun. Once again, my visa is set to expire and I have to head over to Malaysia on Wednesday. These “visa runs” are a major hassle but I guess that’s a sacrifice one has to make while living in this country. So, I guess my next entry will be live from Malaysia.