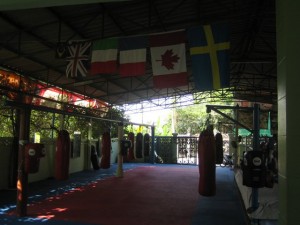 A good “vibe” is indescribable, but it’s definitely felt. When I first arrived at the 13 coins gym 7 weeks ago, the vibe felt amazing. I still remember my initial walk through of the gym. I was pretty star-struck. Orono was there, Pornseneh was there, Saenchai was smashing pads in the back ring in preparation for a title fight at Lumpinee stadium and after watching a full round of that, I looked to my left and to my surprise, John Wayne Parr was hitting the heavy bag. Then, a cute little Thai girl in an apron walked up with a trey of lemonade drinks to pass around. That was the “icing on the cake”. I was home! 🙂

Since then, Pornseneh left the gym and as previously mentioned, Saenchai did as well. Pornseneh went back up to the Sitmonchai and Saenchai got a job at a gym down in Phuket. When that happened, the vibe changed a bit and Mr. Coke, the owner of the gym, was a little upset as you would expect. The next day, a couple of the fighters had a bad outing at Raja stadium and got kicked out, along with their trainer “Ja” – who was amazing.

Since then, the trainer hasn’t been replaced and with it being “high season” here in Thailand, there’s a longer than usual wait time to hit pads. I’m still being prioritized by my usual trainer but the pad-work has become more about making me tired than actually teaching technique. Here in Bangkok, I feel like some trainers try to keep certain techniques to themselves rather than pass it on to us “farang”.

Anyway, I’m sure the gym will pick up again. There are so many amazing things about it (as you’ll see from my overall review of the place) but in the meantime, and just for a change of scenery, I’ve been looking for an alternative. In the past week, I went in for a session at both Sitsongpeenong and Keatkhamtorn.

I had trained at Sitsongpeenong during my last trip here and was impressed with the place. This time was no different. My trainer at 13 coins is an amazing “pad holder” (I doubt I’ll find anyone better) but he’s not as technical as I would like. At Sitsongpeenong, I found it to be a like more technique focused. But to clarify, that’s not to say that one gym is “better” than the other. Both of these gyms are top quality. 13 coins has one trainer, “Ooo” is his name (spelling?) who works in the front ring. He seems like he’s amazing at what he does. Problem is, I’ve been with my trainer there for so long that if I was to change, I think he would feel insulted, and because of that, it’s not really an option at this point.

Anyway, while at Sitsongpeenong, I got some footage of the kids clinching. They were running a 2-on-1 and one of the trainers was whipping them with a small stick. I saw this last time I was there as well. I’ve never seen any other gym doing this but I heard that the trainers the Por Pramuk gym do it as well. At the 0:18 mark of the video, you can see Muay Thai champion, Chantal Ughi, getting playfully attacked in the far ring. She’s fighting at the Kings Cup in December so they’re training her hard.

A few days after I went to Sitsongpeenong, one of the guys from 13 coins (who is also unhappy with the recent changes) wanted to go to Keatkhamtorn. He had trained there for 5 months prior to coming to 13 coins so he knew exactly how to get there – which is always nice because half the time the taxi drivers will end up getting lost here, especially when looking for these gyms which are usually tucked away on little side streets.

Keatkhamtorn gym is known for a couple things; their extended clinch sessions and their top fighter, “Nopparat”, who’s famous in Thailand. Nopparat Keatkhamtorn is a two time Lumpinee champion and top 10 ranked fighter. According to the Keatkhamtorn website, he was a also “5 star chicken tournament finalist” – that’s how you know he’s good. Here’s a video of him doing his pad-work..

What I liked about this gym, as mentioned above, is the clinch work. Oftentimes, when you clinch with Thai’s, they’ll just whip you around without actually SHOWING you the techniques that they’re using. You really have to “squeeze” the tricks out of them by asking them to break it down for you. At Keatkhamtorn, the guy I was clinching with actually seemed like he WANTED to teach me. That was cool and for that reason, I’ll definitely be going back. Before going though, I heard otherwise (that they keep “secrets” from foreigners as well) so I guess it just depends on which trainer you get.

I just got back in from Sasiprapa; a gym that I had visited on 2 previous occasions (read here and here) and today, it was really busy. It’s “high season” here now so the gyms are filling up with foreigners. Sasiprapa is an excellent gym (providing you get paired up with the right trainer, preferably one of the younger ones) but at the moment, it’s a bit overcrowded. That’s unfortunate because since Sasiprapa is in the same area is 13 coins, I was planning in training there as an alternative.

I’ll probably end up just rotating between Sitsongpeenong and Keatkhamtorn for the next few weeks, which is alright because I’ll end up getting more footage and info for the site. Tomorrow though, I’ll be training at Saengmorakot, which is a gym I’ve wanted to check out ever since I saw this video..

The maintenance-worker looking guy with the key ring who takes off his necklace and jumps into the action to give clinch tips, that’s “Jar Tui”, the owner of the gym and a big promoter at Lumpinee stadium. Hopefully the gym is as good as it looks in the videos. I’ll let you know..