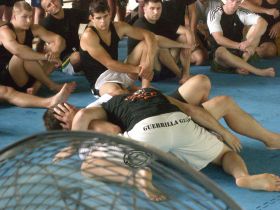 There’s not many things that can get me out of bed at 9 in the morning – especially when I was up until 4am the previous “night” writing articles. However, today – the inspiration was there. Jon Fitch – who has been training here at Tiger Muay Thai for about 3 weeks – gave a free seminar today geared around wrestling for MMA. Being a Perdue wrestling standout and the # 2 rated welterweight in the entire world – Jon Fitch is certainly someone you want to get advice from when the opportunity presents itself.

With the seminar set to kick off at 9am, I set my alarm clock for 8:59am – as that gave me just enough time to roll out of bed basically sleepwalk about 40 feet to the cage area where the lesson was taking place. Staying on-site at the camp certainly has its advantages. Anyway, the seminar started off with Jon demonstrating a basic wrestling shot. I use the term “basic” loosely as while Jon Fitch made the technique seem so automatic and effortless, the majority of the spectators – when given the opportunity to practice it – looked like fishes out of water. What I mean by that that they seemed out of their element. It just goes to show how good these professionals really are. By the way Fitch was demonstrating the shots, you could tell that its something he’s been doing since childhood.

Throughout the seminar, Jon demonstrated about 5 techniques (all wrestling based) but what impressed me the most – other than his talent – was his teaching ability. He was explaining each and every detail by giving examples that people could relate too. Will, the owner of the camp, said that this was the best seminar they’ve ever had here – which is a major testament to Jon’s teaching ability as they have a lot of seminars taught by special guests. I was able to get a lot of video footage throughout the lesson but I was later informed that Jon requested that video clips not be taken as he – along with many other UFC fighters – have started a website called MMAInstructional.com where they demonstrate all sorts of techniques.

So, unfortunately, I won’t be uploading the video footage here. However, the seminar did finish off with an awesome question and answer session. I didn’t have a recorder or anything so these responses are based off my memory and they’re not word for word. Nevertheless, I’m sure you’ll find it interesting..

Jon Fitch on His Loss to GSP

He basically said that a loss is disheartening but it’s something that you have to expect in this business as losing is inevitable. “Nobody retires undefeated, it’s just not going to happen” he said. He then went on and said that you have to view a loss as a learning experience. Instead of being pissed off that you lost, you have to go back and say “Ok, why did I lose? What did I do wrong?”. In the GSP fight, he said he learned a lot. He said he learned not to throw sloppy leg kicks, 1 punch combos and not to drop his hands. He also said that he’s in Thailand now to correct those mistakes. The fight with GSP basically gave him a better idea of what he has to work on and I’m sure he’ll become a better fighter because of it.

“98% of supplements are garbage” he said. “They’re only out there to get your money”. He said you can get everything you need for “free” through food and that supplements are exactly that – to be supplemented to your existing diet if you’re not getting enough of something. He was then asked what 2 supplements he recommends and he responded by saying “whey protein & vitamins”.

He seemed quite disgusted with it. “I don’t know how those guys can look at themselves in the mirror” he said in reference to fighters that use them. He said he doesn’t know how guys can think they’re badass and then turn around and stick a needle in their ass.

He said that as he was growing up, he had to eat canned tuna 3-4 times a day because it was affordable and he needed the protein. He followed that statement up by jokingly saying that “ if I could take all the canned tuna in the world and get rid of it, I would”. I guess the guy doesn’t like tuna very much.

Jon Fitch on training with a Gi

He said that in the months leading up to a fight, it’s very fight specific. His training camp is geared around the style of his opponent. If he’s fighting a wrestler, he’ll get more wrestlers in to train with. If he’s fighting a BJJ specialist, then he’ll train more BJJ. He’s already a BJJ black belt and a wrestler so if there’s anything he needs to work on, it’s striking and I suppose that’s why he’s made this trip out to Thailand.

Jon Fitch on Coming Through the Ranks

As he was talking about customizing his training camp around the strengths of his opponent, the conversation sort of branched off and he started talking about the “old days” when he was coming up through the ranks. He said that back then, he’d show up and he wouldn’t know who he was fighting. The only time he’d have to evaluate his opponent was while he was warming up. He’d say to his friend “dude, what’s he doing over there? Can you see?” his friend would say “Yeah man, he’s doing some crane-karate shit”. “Alright” says Fitch, “I have to watch out for the flying crane kick”.

He also said that back then, he’d often get asked to fight multiple times in 1 night. He said that on one occasion, a promoter came up to him after his first fight and offered him 100 bucks to fight again. Fitch declined and then the promoter offered him 500 dollars to fight, but not to knock his opponent out. Fitch said that he agreed, but knocked the guy out so he only got the 100 dollars. On top of that, he broke his thumb in the process which cost $700/$7000 to fix. I didn’t quite hear the exact amount. I hope it wasn’t $7000 to fix a thumb. If that’s the case, than wow .. I hope Obama improves the health care system.

At the end of the seminar, Jon Fitch stuck around and took photos with each of the attendees. There was about 60 people in total. He seemed like a nice guy for sure. I think he and his team mates are flying back to the states tomorrow morning..