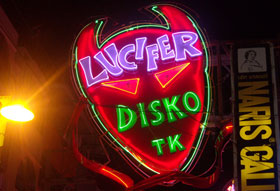 Yup, it’s true. I got robbed last night at Lucifers, which is a hip hop bar here on walking street. It wasn’t at gun point or anything and as a matter of fact, it wasn’t that dramatic at all. The club was really busy and at one point I thought I felt hands around my waist – but that’s nothing new in Pattaya where girls are constantly attempting to seduce you.

I did a quick check and my camera was still there so I figured all as well. That was until I got to a different bar and ordered a couple San Miguel Light’s. Checked my front right pocket where my 1800 baht was supposed to be.. and nothing! Checked the left pocket.. nothing! Back pockets.. nothing! It was kind of embarrassing actually since the two beers were already opened and the second beer was for a hot Thai girl, who ended up having to pay for them herself.

The girl didn’t speak English very well either so luckily I remembered how to say “I have no money” in Thai as an Irish guy from the “international muay thai club” taught me earlier that day. Trust me, as a foreigner living in Thailand, Mai-Mi-Sataing (have no money) is the most useful phrase you’ll ever learn.

Anyway, on a different note, I haven’t been to Sityodtong yet but I checked out another place. International Muay Thai Club, which is run by a couple Italian guys is about a 5 minute walk from my apartment. When I first got there, honestly, I really wasn’t feelin’ it. Their wasn’t much direction at all. I showed up, changed, paid and I was sort of left to do my own thing.

Not only that, but I didn’t find my surroundings very motivating. Their was a couple guys sparring in the ring (a Thai and an Italian) and the Italian guy had his hands down below his waist the entire time. I’m pretty sure he was one of the owners too so I didn’t get why his form looked so bad.

After aimlessly hitting the bag on my own for a while, I was called into the ring by one of the trainers. It was when I was doing the padwork that my opinion of the place changed. The trainer actually worked my technique a lot. The trainer I was working with was a Thai and one of the Italian owners, who spoke perfect english, was watching.

He noticed that I was leaning back too much as I was throwing the kicks and although he said it looked good, he said that you lose power that way and that I should maintain an upright posture as I throw my kicks. He demonstrated his point and he’s right. I think I lean back to compensate for a lack of flexibility. At least now I know what I have to work on. Here’s a video tour of the camp as well as a video of one of the owners and one of the trainers doing some sparring..

So tomorrow is the big Sityodtong day and I’m really looking forward to it. I’ll be sure to get some good footage of the gym and the Thai fighters training. I also checked into a new apartment and I’m working on a lil’ video compolation of the place to make my friends back at home jealous. The room and all the furnishings are brand new. I have a TV, DVD player, fridge, safe, private washroom but none of that was the selling point.

The selling point for me, and I’m in no way ashamed to admit it, is the 40 or so gogo dancers that are walking around the place every night since my room is atop a nightclub. I literally step out of my room and there’s an entertainment area with a big screen plasma TV, sofas, pool tables and of course, the girls change room happens to be right there as well so I just chill on the sofa with my laptop and enjoy the sights as they change into their sexy lil’ costumes. And the best part, the rent here costs me about the same as I was paying for a room in my parents house back in Canada.

Keep checkin back for a video tour of my new residence ; )