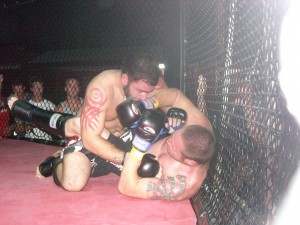 So the other night I witnessed a couple of the best MMA fights I’ve ever seen, and no – I wasn’t tuned into UFC 89. The fights I watched were “smoker” fights and they were the entertainment portion of last night’s “full moon BBQ party” here at Tiger Muay Thai. “Smoker” fights are unsanctioned, inter-camp fights that give fighters a chance to gain experience without effecting their professional records. Usually these smoker fights resemble nothing more than hard sparring sessions but last night, the fighters came ready to brawl and came out swinging.

First up was a light, drunken, boxing-only sparring session between two of the Thai trainers. This fight was more about fun than competition as the fighters were throwing back chugs of beer in their corners between rounds. They would also randomly take swings at the referee in order to get a few laughs from the crowd. Following the boxing match was a Muay Thai fight in which the fighters were going about 70% as I think they were friends.

After that, it was time to move things over to the cage for a grappling match and two MMA fights. The cage is situated about 20 feet from my room so I decided to quickly run and get my camera. In the process of doing so, one of the fighters pulled off a flying armbar and within a matter of seconds, the match was over. I completely missed it as by the time I walked backed to the cage area, the crowd was laughing in disbelief and what they had just witnessed. Luckily, the match was being filmed by some of the other spectators so without further ado, here it is..

It was now time for the MMA fights. In the first fight, one of the guys was throwing out really powerful, technical kicks – one of which landed flush to the face of his opponent. He was tough though as he kept pushing forward. However, he eventually had his back taken and got choked out. Both fighters fought with a lot of heart and put on a great show. Here’s the fight..

Next up was the “fight of the night” as the best was clearly saved for last. These two guys stood toe to toe and swung for the fences. Even Jon Fitch – the special guest referee – was impressed. Had this fight taken place in the UFC, I’d imagine that Dana White – as well as about 17,000 people in attendance – would have given it a standing ovation. It was one of those fights where if you had never seen an MMA fight, you’d have a whole new respect for the sport (sort of like what the Griffin/Bonner fight did for the UFC). I know you want to see this one, so here it is ..

After the fights, the party continued as the beer was included in the cost of the BBQ/fight tickets. The scene got rowdy as the guys started holding each other under the beer tap. It eventually become a competition to see who could chug the longest. By the end of it, I think the time to beat was around 20 seconds. “Fitch! .. Fitch! .. Fitch!” .. The chants began and at first he was hesitant, saying “I need a water!”. He was eventually coaxed into it though and I believe he even broke the previous record.

When the beer ran out, everyone headed out to Patong Beach for a night on the town. I have to say, Patong isn’t what I remembered it to be as at this time last year, it seemed a lot busier. The girls last year also seemed to be a lot more attractive but perhaps that’s just a result of me spending the last 3 months in Pattaya – which I don’t think anywhere else in the world can compete in terms of women. I think all the recent turmoil in Thailand has had a very negative impact on the tourism here in Phuket as several anti-government protests have taken place at the local airport. I suppose the fact that Patong isn’t as exciting as it used to be is a good thing as I won’t have the temptation to go out and party. I can now not only save money, but also, I can focus 100% on my training (which is what I need right now).

And Speaking Of My Training

I was put through my first workout on Friday afternoon. To be honest, I really didn’t know what to expect. Tiger Muay Thai is a lot more foreigner-oriented than a lot of the other camps I’ve trained at. I’d estimate that there’s around 60-80 students here (which is a lot more than any other camp I’ve trained at) and it has somewhat of a summer camp feel. I was a little concerned that I wouldn’t get a lot of one-on-one attention from the trainers as I would roam the camp and oftentimes see some of the students getting “privates”.

“Privates” are basically personal training sessions with the Thai trainers and there’s an additional cost associated with these workouts. Since I saw so many students paying extra for these private sessions, I was worried that perhaps they weren’t getting enough attention from the trainers during their regular workouts.

Luckily, this isn’t the case at all. My first training session began with skill-evaluation in which I was asked to kick the heavy bag. I threw a couple kicks and as moved to the intermediate class. I find it to be a perfect fit as the class had about 10 students and servicing those 10 students was about 5 trainers. One of the trainers (Nazee) is the head trainer here (I believe) and he was working with me on the pads. I was actually told to train with “Nazee” before I even came here so I was familiar with the name and it looks as though I really lucked out since he’s an excellent trainer.

The workout itself was very complete. It began with skipping, stretches – the usual. Once we were all warmed up, we went through some techniques and cool elbow combinations – some of which ended with a flying elbow strike to the top of the head, like something you’d see in a Tony Ja movie. After technique, we moved on to sparring. I ended up doing 3 rounds (each round against a different opponent). After sparring I was exhausted and it was then time for pad-work with Nazee. The instruction was great but not only that, I didn’t feel like I was being rushed and I felt like they actually wanted me to get better. The worked was finished off with some more group technique instruction, some sit ups and some stretches.

I was impressed with the session but unfortunately, during the sparring, I sustained a mild sprain to my ankle and as a result, I’ve been limping around for the last couple days. Hopefully I’ll be good to go in a day or two as I don’t think it’s very serious. All in all though, I was impressed. So far so good. I still have quite a while here before I form my official review though so keep checking the entries.

It looks as though I’ll be doing a visa run tomorrow since I was given the wrong visa by the Thai embassy in home town. I’ll likely be going to Ranong so I’m sure it’ll be interesting.