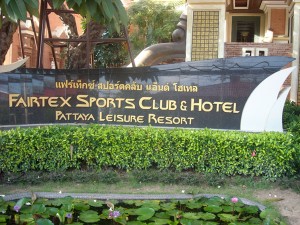 So, I finally made it over to the Fairtex camp here in Pattaya. I’ll be honest with you, I went to the gym today with the intention of basically picking the place apart based on what I had read in some of the other forums. It seems as though the general consensus amongst the Muay Thai community is that the Fairtex Pattaya gym is nothing more than a resort that just happens to offer some Muay Thai classes.

Upon entering the facility, you basically get treated like royalty. The doors get held open for you, the Thai staff all offer a traditional greeting and of course, the female staff are all quite attractive and dressed in flight attendant-like uniforms. No complains so far. Time to pay for training. “How much?” I asked. “800 baht please” she replied.

800 baht for training? I’m used to paying around 250 baht at Scorpion and Sityodtong. 800 baht by Western standards isn’t so bad (it’s only around 24 US dollars) but this is Thailand. For 800 baht I can get 2 nights in my hotel or 26 meals from the restaurant across the street. Well, I paid the fee anyway so I could do the review for the site.

Before I go any further, check out this video tour I took of the facilities. As you can see, they put a lot of money into this place. Also, look closely and see if you notice the guy who’s training in one of the back rings. More on that later though. As a toured the facility, and saw how nice it was, the daily cost for training seemed to become a lot more justified. This place looked amazing!

As I was checking the place out, I was greeted by a guy named “Ted”. He spoke perfect English (which was a nice change of pace) as he’s originally from Los Angeles. I’ll go out on a limb here and say that “Ted” is one of the nicest guys I’ve met since I’ve been here. After a quick meet and greet, I started my skipping and bag-work.

After about 20 minutes or so, I was called into the ring for pads. One thing I noticed immediately is that above the ring, there’s a fan that that blows moist air downwards. Since the rounds at Fairtex are 4 minutes, rather than the 3 minutes I’ve been doing at Sityodtong and Scorpion, the fan helped for sure. That extra minute makes a huge difference.

As for the quality of the pad-work, I have to say, the trainer was awesome. For everyone that posts in the forums claiming that the trainers at Fairtex Pattaya just run you through “tourist pad-work” without focusing on technique, that’s not what I experienced at all. He corrected my stance, he corrected my switch-kick technique and he was really good and holding the pads during the two rounds of pure boxing we did.

When my session started off, I was in the ring with two foreigners (one Japanese girl and another white dude). After the third round, the foreigners had finished so I was in the ring by myself. I then saw a Thai guy step into the ring out of the corner of my eye. I looked again and WOW – it was Yodsanklai!

For two full rounds, I was sharing the ring with Yodsanklai Fairtex (one of the best Muay Thai fighters in the world). I try explaining it to my friends who don’t know who Yod is by saying it’s “like shooting around with Micheal Jordan” or like “being stationed next to Tiger Woods at the driving range”.

It’s one thing to see Yod hitting the pads in a Youtube video but when you’re standing 10 feet away from him while he’s training, it’s just unbelievable. I really don’t know how to describe it. It’s like he’s some Muay Thai robot or something. He’s technique is just amazing. He kicks the pads and you just cringe at the thought of being on the receiving end of the shots.

One thing I noticed too is that in person, Yodsanklai is very built. His calves are massive which I’m sure makes the kicks even more devastating. I took a couple videos of his padwork, here’s one of them..

So overall, I had a really good experience today at Fairtex Pattaya. The facility is top notch, the atmosphere is very friendly, the trainers are great and you get to train alongside some of the best Muay Thai fighters in the world. The Fairtex catchphrase “be inspired” certainly rang true today as I was training 5-10 feet from Yodsanklai Fairtex himself.

The Big Question: Is It Worth The Money?

I’ll admit, I was pretty stoked after today’s training session. I got to witness Muay Thai at it’s highest level and it’s actually pretty “inspiring”. I’ve been telling all my buddies at home about the “Yodsanklai sighting” today to make them jealous (geez, I sound like some Muay Thai groupie!)

At 800 baht a session, it’s a little out of my price range since I plan in training every day and staying here in Thailand long term, but if money wasn’t an issue, I would absolutely love to train here again!

If you’re staying for a longer time or if finances are a concern, you can easily find quality training for under 300 baht a workout and you can find a quality room for about 400-600 baht per night. Even then, I still recommend at least a visit or two to Fairtex Pattaya simply for the experience.

By the same token, if money isn’t an issue and you’re staying at the Fairtex Pattaya resort, I also recommend that you train at some of the gyms off the beaten’ track like Sityodtong for a less luxurious, but an “authentic” Muay Thai experience. Overall though, I’d absolutely recommend training at Fairtex.

I finished off my last entry right before heading out for a night on the town. As predicted, it was a wild night and wow, the things you see in Thailand! I was eating at a Thai food stall when a big fight broke out. By the time I saw what was going on, stood up and got my camera out, the majority of the fight was over. However, I did manage to get at least a little bit of the end on video. I’m pretty sure that the “girl” being attacked is actually a ladyboy.

So, that’s it for now. Either tomorrow or sometime next week I’ll be visiting a camp here in Pattaya that offers Muay Thai, Western Boxing, Sambo, BJJ and MMA. In my next entry, I’ll also share some inside info. I got today on a potential fight between Yodsanklai and Baukaw.